The City of Beverly Hills held its annual Innovations Day on Oct. 14 at the Wallis Center for the Performing Arts. “Innovations Day is the annual professional development day for our employees,” City spokesperson Keith Sterling tells the Courier. “In the past, we’ve featured several keynote speakers, but in recent years have added the community service component to encourage giving back. This year, we also had a performance by the cast of The Groundlings Theatre,” said Sterling.

The annual “Employee Excellence Awards” is part of Innovations Day and recognizes those who have contributed significantly to the organization’s success. Awards are given out in three categories: Outstanding Job Performance, Bright Idea and Exemplary Customer Service. Nominations for the awards were made by city employees and evaluated by a committee. Honorees this year worked with community services such as the Beverly Hills-based pet rescue and animal hospital charity, The Amanda Foundation as well as letter writing for Operation Gratitude.

The Courier congratulates the employees recognized in the following categories: 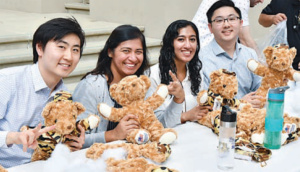