The Beverly Hills City Council unanimously adopted a resolution at its Aug. 18 regular meeting condemning recent anti-Zionist incidents at universities in Los Angeles. The resolution comes at a time of rising anti-Semitism both domestically and globally and joins a host of other moves over the years by the Council expressing solidarity with Israel against anti-Semitism.

“This council has taken a very strong stance against Jew hatred,” said Councilmember John Mirisch, who asked to place the resolution on the agenda in response to a recent incident at the University of Southern California (USC).

“I have been harassed and pressured for weeks by my fellow students because they opposed one of my identities,” Ritch wrote in a letter announcing her resignation. “I have been told that my support for Israel has made me complicit in racism, and that, by association, I am racist.”

On the Instagram account @black_at_usc, one of many accounts that has provided Black university students across the country a place to vent anonymously about racism on their respective campuses, anonymous Trojans accused Fritz of referring to Black students by “certain names.” The posts did not offer specifics.

Fritz stepped down on July 7.

“No single person can represent the backgrounds of all 20,000 undergraduate students, but as a person of privilege, I recognize that I lack the lived experiences necessary to adequately represent my peers,” Fritz wrote in a statement announcing his resignation.

But prior to Fritz’s resignation, Ritch found herself under similar scrutiny as Tijani and other students asked her to address the accusations leveled against her former running mate. In the absence of a response, calls for her own impeachment grew louder.

In the ensuing controversy, Ritch claims that she received harassment on the basis of her Zionist beliefs.

After learning about the harassment, Tijani took to social media to refocus the narrative around Ritch’s impeachment.

“The assumption that Rose accepts the human rights abuses occurring to Palestinians at the hands of the Israeli government and the IDF [Israel Defense Forces] simply because she supports the Jewish right to self-determination is, by nature, anti-Semitic,” Tijani shared on Instagram June 27.

“However, the REAL and primary reasons that I am calling for Rose to be impeached is because she has chosen to be complicit in Truman’s actions and micro-aggressions and has not come forward to condemn his behavior in a swift manner,” she added.

According to The Daily Trojan, Tijani made two attempts to speak with Fritz and Ritch, but the pair cancelled both meetings at the last minute, citing mental health issues. On July 1, the same day that Fritz and Ritch cancelled a second meeting with Tijani, she filed the formal impeachment complaint.

Responses to Ritch’s resignation on Aug. 5 came nearly immediately. On Aug. 6, one day after she stepped down, USC President Carol Folt shared an open letter responding to the situation.

“As president of USC, I believe it is critically important to state explicitly and unequivocally that anti-Semitism in all of its forms is a profound betrayal of our principles and has no place at the university,” Folt wrote. “What happened to Rose Ritch is unacceptable, and we must all take up her challenge to do better.”

The letter also announced the creation of a new initiative led by the USC Shoah Foundation, “Stronger than Hate.”

Founded by Steven Spielberg in 1994, the Shoah Foundation compiles and shares video testimonials of Holocaust survivors with the purpose of developing “empathy, understanding, and respect through testimony,” according to their website.

The Stronger than Hate initiative “is designed to help foster a campus culture of connection and compassion that empowers us to listen, learn, heal, and dream together,” President Folt wrote in her letter.

“We are deeply concerned about the harassment Rose Ritch reports receiving as an elected rep of the student gov at @USC because of her support for #Israel,” the ADL wrote.

The following day, on Aug. 7, the ADL Los Angeles praised the President’s letter and the announcement of the Stronger than Hate initiative.

“We look forward to seeing how @USC will improve the campus climate for everyone, starting with the partnership with [the Shoah Foundation],” the organization tweeted.

Both Councilmember Bosse and Mayor Lester Friedman are children of Holocaust survivors.

In a message of her own posted to Instagram on Aug. 6, Tijani lamented how the original purpose of her campaign had been forgotten.

“Of all the pain and frustration this whole situation has brought to everyone directly involved, I am most disappointed to see that all the activism around the Black Lives Matter movement at USC has been swept aside and eclipsed by a movement against anti-Semitism, a movement that apparently I helped to reignite when my words were (understandably) misinterpreted,” she wrote. “It cannot be denied that anti-Semitism is very real and still very present at USC and in our society at large, but the labelling of me as the leader of an anti-Semitic campaign against Rose is extremely harmful and wrongfully dangerous.”

In the Aug. 6 post, Tijani also described how she had begun receiving harassment of her own after links to her social media accounts, along with pictures of her face, were posted online.

The City Council’s resolution also cites an incident that occurred at UCLA in May 2019, in which a guest lecturer spoke out against Israel and described Zionism as a colonialist ideology with roots in white supremacy. 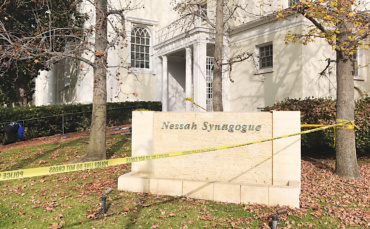 When asked by the Courier if she thought her friend was motivated by hate, Nabila Bee responded, “Not at all! He is the most loving, accepting person.” Another friend, Pittsburg-based photographer Alyssa Maurer, echoed Bee, saying, “He is openly gay and would never commit a crime that devalues the beliefs of others.”