The Los Angeles Museum of the Holocaust is now Holocaust Museum Los Angeles with a new logo and expanded vision for the future. The first survivor-founded Holocaust museum in the United States traces its origins to the 1960s, when a group of survivors met and discovered that each of them had a photograph, document or personal item from before the war.

They decided that these artifacts needed a permanent home where they could be displayed safely and in perpetuity. They also wanted a place to memorialize their dead and help to educate the public so that no one would ever forget.

Since 1961, the museum has provided free Holocaust education to students and visitors from across Los Angeles, the United States and the world, fulfilling the mission of the founding Holocaust survivors to commemorate, educate and inspire. The museum is open seven days a week and admission is free.

Kean told the Courier, “In this day in age we knew it was vital that our voice be heard loudly and clearly to come to the aid of society and humanity. This new name and logo are grabbing attention at a time when our country needs more conversations and we want to be a leader in those discussions.”

Prior to the COVID-19 pandemic, over 20,000 students a year visited the museum to learn about the Holocaust and meet with survivors. Holocaust Museum LA still conducts its education programs virtually, including student tours, survivor speakers and other specialized programs. It has a plethora of resources that can be used virtually, including teacher guides and training.

The new logo, an image of a hand lined by barbed wire, is a traditional symbol of protection.

“The hand is a universal way of communicating and sharing emotions and gestures,” said Michele Gold, board chair, Holocaust Museum LA. “It is symbolic of our identity and values in the fight for justice and overcoming adversity. It also sends a message to stop the hate and bigotry, which is more important in our country and the world than it’s ever been.” 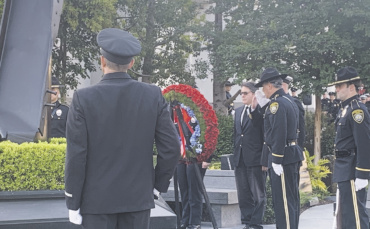 City officials told the Courier that since next year is the 20th anniversary of the attacks, the ceremony is expected to be larger in scale.