A Beverly Hills High School alumnus may soon clock in to work at 1600 Pennsylvania Avenue. On Nov. 23, President-Elect Joe Biden nominated Alejandro Mayorkas to serve as the head of the Department of Homeland Security. If confirmed by the senate, he would become the first Latino and immigrant to assume the Cabinet position.

“We have no time to lose when it comes to our national security and foreign policy,” Biden said in a statement. “I need a team ready on Day One to help me reclaim America’s seat at the head of the table, rally the world to meet the biggest challenges we face, and advance our security, prosperity, and values. This is the crux of that team.”

Mayorkas, who grew up in Beverly Hills, was born in Havana, Cuba, to Jewish parents. His mother emigrated from Romania to escape the Holocaust and met his father, who was of Sephardic heritage. His family relocated from Cuba to Miami when he was just six months old after Fidel Castro’s 1959 Revolution. Soon after that, his family settled in Beverly Hills.

“When I was very young, the United States provided my family and me a place of refuge,” Mayorkas said in a tweet. “Now, I have been nominated to be the DHS Secretary and oversee the protection of all Americans and those who flee persecution in search of a better life for themselves and their loved ones.”

In line with other appointments to his nascent administration, Mayorkas comes with ample policy and political experience. Mayorkas previously served as the Deputy Secretary of the U.S. Department of Homeland Security under President Obama from 2013 to 2016. In that role, he was the chief engineer behind the Deferred Action for Childhood Arrivals (DACA) program. He also spearheaded the thaw in relations between the United States and Cuba, returning to Cuba for the first time since his birth in 2015. The Trump Administration has pushed back on both of his policy accomplishments, attempting to end DACA and reinstating restrictions on travel between the U.S. and Cuba.

“It is an honor to be nominated and entrusted by the President-elect to serve,” Mayorkas said in a subsequent tweet. “It is no small task to lead the Department of Homeland Security, but I will work to restore faith in our institutions and protect our security here at home.”

Mayorkas may not be the only Beverly Hills High School alumnus to ascend with the Biden Administration. Media reports have identified Former Defense Undersecretary for Policy Michele Flournoy as a top contender to run the Pentagon. If confirmed, the Beverly Hills-native would become the first female Secretary of Defense. 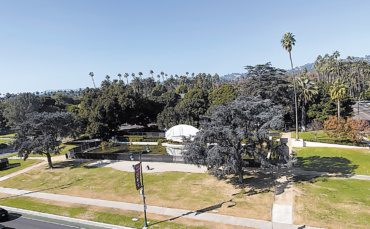 “I have never experienced the kind of pushback I am hearing,” Hahn said of the in-person dining ban. “The public doesn't think that that recommendation is right, and they don't think it's going to work, and they are really losing faith and trust in the decisions that we're making.”

The Draft Complete Streets Plan is a mobility policy plan that includes a comprehensive analysis of pedestrian, bicycle, street networks, and emerging transportation modes and technologies.