In time to celebrate the new year, Starr has also released a new song,  “Here’s to the Nights,” from his upcoming EP Zoom In, set to arrive March 19th, 2021.

In celebration of the three decades since Ringo Starr founded his All Starr supergroup, a new limited-edition retrospective hardcover book titled “Ringo Rocks: 30 years of the All Starrs,” has gone on sale exclusively online for $39.99 at juliensauctions.com.

The commemorative photo memoir features some never-before-seen photos of the All Starr Band’s 30 years in the spotlight.  The photos are accompanied by candid stories from Starr, a Beverly Hills resident.

Additionally, five hundred exclusive-limited hardcover “signature edition” books personally signed by Starr will be offered for $495 each. The proceeds of the book will benefit The Lotus Foundation whose mission funds supports, participates in and promotes charitable projects aimed at advancing social welfare in diverse areas including, but not limited to substance abuse, cerebral palsy, brain tumors, cancer, battered women and their children, homelessness, and animals in need.

In time to celebrate the new year, Starr has also released a new song,  “Here’s to the Nights,” from his upcoming EP Zoom In, set to arrive March 19th, 2021.

“When Diane presented this song to me I loved the sentiment of it,” Starr said in a statement. “This is the kind of song we all want to sing along to, and it was so great how many wonderful musicians joined in. I wanted it out in time for New Year’s because it feels like a good song to end a tough year on. So here’s to the nights we won’t remember and the friends we won’t forget—and I am wishing everyone peace and love for 2021.” 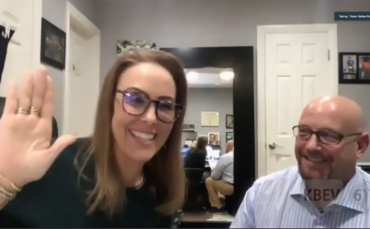 BHUSD Installs New Board of Education

"We are delighted to hit the ground running with our newly installed Board of Education. I have every confidence that they will lead us through what is now the worst time of the pandemic for our community toward the best educational decisions for all of our students, staff, and families," Bregy told the Courier.