The Beverly Hills City Council grappled with upcoming changes to California’s Density Bonus law at its Dec. 21 Study Session. The decades-old legislation provides incentives to encourage housing development, but has come under scrutiny for failing to blunt the on-going housing crisis in California. In August, state lawmakers passed an expansion of the program. The Council unanimously rejected a possible eleventh-hour workaround that would have sheltered the City from the more developer-friendly provisions at the risk of alienating state officials.

The state’s Density Bonus program, originally passed in 1979, grants incentives to developments that include a certain percentage of affordable units. In return for below-market rate housing, the development can include more units than normally permitted, along with other “incentives” and “concessions” such as reduced parking requirements and eased height restrictions. The law can compel local governments to reduce or waive certain local development standards for eligible developments.

The program works on a scale that grades affordability at moderate, low, and very low levels. Under the pre-2021 standards, if a development included 40 percent moderate income units, it was eligible for three incentives and a maximum 35 percent density increase. With 20 percent units for low-income renters, the development received two incentives and the same maximum density bonus. If a development set aside 11 percent of its stock for very low-income tenants, it would receive two incentives and a 35 percent density bonus. Eligible developments would also receive reduced parking requirements. A studio or one-bedroom unit would need one parking space, two spaces for two-or-three bedroom units, and 2.5 spaces for four or more bedrooms.

But the law had issues—namely, developers did not seem interested in taking advantage of it. According to a 2018 survey conducted by UC Berkeley’s Terner Center for Housing Innovation of cities across the state, a full 55 percent of projects from 2015 to 2017 made no use of the density bonus incentives. “While density bonus and inclusionary ordinances are relatively common across California’s jurisdictions, planners report that they have not resulted in significant new development,” the report found.

In the last legislative session, state lawmakers passed Assembly Bill 2345, which amended certain provisions of the Density Bonus program to address the shortcomings of the law. The enhanced bonus takes a page from San Diego, which implemented similar changes in 2016. Now, if a development contains 44 percent of units priced for moderate incomes, it can earn three incentives and a 50 percent boost to density. Developments with 24 percent low-income housing and developments with 15 percent very low-income housing receive the same perks. The retooled incentives include one change to parking requirements, reducing the number of spaces for two-and-three-bedroom units from two spaces to 1.5.

The amended law goes into effect on Jan. 1, 2021. While it does include an exception for jurisdictions that had more generous incentives than the original law, that does not apply to Beverly Hills.

The looming deadline presented the City with a few options. First, the City could accept the 15 percent increase to the density bonus. Alternatively, the City could find a way around it by passing an increase to its own density bonus measures under the wire of the Jan. 1 deadline. This would make the City eligible for the law’s exemption. But, as the Staff Report compiled for the Study Session notes, the state might look askance at the move.

“It is possible that [the Department of Housing and Community Development] could view such an ordinance negatively, which could impact the City’s ability to achieve a certified housing element. More specifically, HCD may view any ordinance that allows less than a 50 percent bonus as a constraint on housing production, and therefore require the ordinance to be repealed or modified.”

Every eight years, cities and jurisdictions around the state draft a new Housing Element, a part of the General Plan which considers the housing needs of the community and anticipates how that need will change. With the housing cycle slated to start again in 2021, localities across the State are preparing their Housing Elements for approval by HCD.

While reviewing their options with regards to the Housing Density updates at the Study Session, Mayor Lester Friedman described the bad optics of a possible Urgency Ordinance succinctly. “It would show that Beverly Hills thinks it’s better than everybody else,” he said.

Councilmember Dr. Julian Gold also came down hard against the alternative. “I agree with the fact that it could conceivably come back to bite us when we get to certifying our housing element, because it would appear that we’re not really negotiating in good faith,” he said.

Instead of a “reactive” approach to housing, Gold opined that the City was overdue for a comprehensive discussion on housing. “I would like to see the Council have a broader discussion at some point or in some context that really does try to outline our vision for the future of the development of housing in the City of Beverly Hills.” 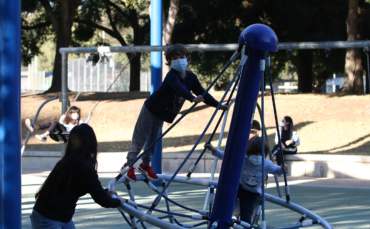 “We understand the need for adults and children to be outdoors and recreate, and we are happy to reopen our playgrounds, however, we ask that you recreate responsibly for the safety of you as well as your neighbors. To ensure the safety of its park and playground visitors, the City of Beverly Hills will have staff on hand to monitor compliance.”

“We recognize the need for affordable housing,” said Councilmember John Mirisch. “Here, we have an extremely unique opportunity.”