As the Beverly Hills Planning Commission looks ahead at the new year’s docket, it faces some of the largest projects in the city in years. Three projects alone, One Beverly Hills, LVMH’s Cheval Blanc, and the Beverly Hills Creative Offices project (“BHCO,” also commonly referred to as “Lots 12 and 13”) promise to potentially reshape the city’s skyline and street views of Beverly Hills for years to come.

“Those will take up a significant amount of 2021,” Assistant Director of Community Development Ryan Gohlich told the Courier.  The Planning Commission will first take up the One Beverly Hills project, a condominium and hotel development on the vacant lots of the old Robinsons-May department store and part of the Hilton property. The project is managed by Cain International and Alagem Capital Group, the owner of the adjacent Beverly Hilton. The $2 billion proposal includes two condominium towers at 28 and 32 stories comprising of 303 condos. Then, a 10-story hotel development
including 42 all-suite guest rooms, along with a fine-dining restaurant and 37 residential units. Finally, the project also incorporates large amounts of green space that would be open to the public.

While construction could potentially begin in 2021, Gohlich said that it will most likely break ground in 2022.

“It’s a very complex project in terms of the various structures involved and it’s a very large project. It’s over a million square feet of development between the sites. And there is going to be a lengthy permitting process. If they are able to secure the needed zoning approvals from the City Council, then they are going to have a pretty lengthy process of just preparing what we refer to as construction drawings—it’s not just the architectural plan, it’s all the engineering and electrical, mechanical, plumbing, all the little bits and pieces of construction.”

The One Beverly Hills project has the potential to revitalize a once-thriving property—one that Gohlich said used to play a crucial role in the City’s economic fabric. “It’s not good for the city to have vacant land sitting there, that’s not benefiting anybody,” he said. “The Robinsons-May site is a good example of a huge piece of property that used to generate a substantial amount of revenue to pay for all the great city services that we have, and there has been zero activity on that property since the early 2000s. It’s been a long, long time that that property has not been contributing in a positive effect to the city.”

If all goes according to schedule, Gohlich says, the One Beverly Hills project will land before the Planning Commission “through winter and possibly in the spring.” Based on that timetable, the City Council will take up the project toward the end of spring or the summer.

“The hope is that there will be some sort of a final decision on the project in 2021,” he said.

Following behind One Beverly Hills, the Planning Commission will also take up plans for the highly anticipated Cheval Blanc Beverly Hills. The luxury hotel, spearheaded by French conglomerate LVMH, has marked off a location on the corner of Rodeo Drive and South Santa Monica Boulevard. The spot stretches across four parcels of land: the former Brooks Brothers building, Celine Rodeo Drive, the former Paley Center for Media and the property at 449 N. Beverly Drive. The proposed property would serve as a boutique luxury hotel with 115 rooms, ground-floor LVMH retail establishments, and high-end dining venues.

“LVMH has made significant investments in the city over the years and I think it’s great to see continued interest from such an important company in the world of luxury,” Gohlich said. He added, though, that the plans come with some complications. “It’s a project that does not comply with our existing zoning standards, it’s over height, over floor area. They have a world-class architect, so it’s a very well-designed project, and it comes with some big policy questions. How much floor area, how much height is appropriate in that area of the business triangle? Those questions are to be determined through the public process.”

As it currently stands, the Cheval Blanc plans call for up to 220,000 square feet of floor area, with a 4.2 to 1 Floor Area Ratio (FAR)—the measurement of the total floor area in relationship to the site area. “Which basically means 4.2 times the size of the total site area,” Gohlich explained. “They are proposing a maximum height of nine stories, or 115 feet, along the Beverly Drive side of the project. On the Rodeo side, they’re proposing four stories in height.” The existing code allows for three stories on the Rodeo side, with some rooftop uses permitted on newer buildings.

The Planning Commission has already begun work on the Draft Environmental Impact Report (EIR) for the project, though it will still be “a handful of months” before the public sees it. He estimates that the project is three to six months behind One Beverly Hills.

The Planning Commission will also decide the future of Lots 12 and 13 in 2021. The two vacant lots, which abut Santa Monica Boulevard, sit on the site of a former rail right of way. As such, the land is zoned only for transportation purposes. The owner of the land, the Beverly Hills Land Company, has proposed a deal with the city: “It is basically undevelopable land with the current zoning designation, and so what they are proposing is that the zoning be changed to allow for commercial development, and in exchange for that change of the zoning, they would then give Lot 13 to the city.”

The Beverly Hills Land Company has indicated plans to build boutique office space on Lot 12. The city would be free to develop Lot 13 as desired. These proposals have not been without controversy, as Gohlich notes. “Some people think it should just remain exactly as is and never be touched. You’ve got people who think it should be developed with just park space and all of it as park space. And then some people, presumably, are in favor of some form of development, either commercial or residential, in the area.”

“I think one of the challenges is that it has been vacant for such a long period of time that people have gotten used to it being a buffer between Santa Monica Boulevard and the neighborhood to the south,” Gohlich said.

The BHCO project falls last in the 2021 calendar, with Gohlich estimating that the project is about three to six months behind LVMH.

Gohlich says that this year is uniquely busy for the Planning Commission. The commission faces both impactful policy decisions and large development projects. “I don’t know that it’s rare, but normally, when you’re busy with development projects, you tend to not be as busy with policy projects. And what we’re looking at is being equally busy on both the policy side and the development side.” 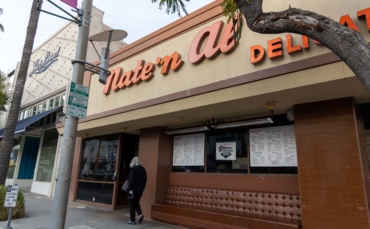 “We had hoped that we could continue our takeout and delivery service so that we could provide the community with the food that has been a part of our lives for years. However, our number one priority is to keep our customers and our staff safe and secure during this time of uncertainty.”