“Our library is a world-class library and it deserves a world-class name,” said City of West Hollywood Mayor Pro Tempore Lauren Meister. “Justice Ruth Bader Ginsburg’s legacy embodies West Hollywood’s core values and beliefs. There has been no one more progressive and no feminist who accomplished more. Justice Ginsburg’s accomplishments are iconic in West Hollywood — whether we are talking about women’s rights, the rights of people who are Transgender, or the rights of LGBTQ people to marry whomever they love, Justice Ginsburg fought for all of us.”

Throughout her career as both an advocate and jurist, Justice Ginsburg championed gender equality in the courtroom and in her life. She served 27 years as an Associate Justice on the Supreme Court, sucomming to metastatic cancer of the pancreas in September.

The Council-approved item makes its way to the City of West Hollywood’s City Clerk, who will consider a request to rename the West Hollywood Library the “Ruth Bader Ginsburg West Hollywood Library.” The item also directs City staff to follow procedures outlined in the City’s Naming Policy, allowing for community engagement and input. The process laid out by the procedures includes a review of the proposal by staff; a Naming Committee made up of the Mayor, Mayor Pro Tempore, City Manager, Chair of the Public Facilities Commission, and Human Services Department Director; and review from the City’s Public Facilities Commission, with an opportunity for advisory bodies, civic organizations, and the general public to offer their thoughts.

The name change must adhere to a set of guidelines articulated by the City’s agreement with Los Angeles County, which states that the library facility must include the words “West Hollywood.” The guidelines also stipulate that any name shall be subject to the approval of Los Angeles County.

“As we stood in West Hollywood Park in 2015 on the day the US Supreme Court announced its decision on marriage equality, Justice Ginsburg and the City of West Hollywood became indelibly connected,”  Meister said. “Our country, our state, and our city are all better places because of Ruth Bader Ginsburg.” 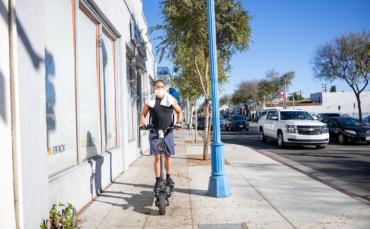