As the world watched the vandalism at the Capitol on Jan. 6, one recurring image was of a participant wearing a sweatshirt that read, “Camp Auschwitz.” That individual was not alone, according to a report released by Miller Center for Community Protection and Resilience at Rutgers University-New Brunswick and the Network Contagion Research Institute, which identified at least half a dozen neo-Nazi or white supremacist groups involved in the events of the day.

Scholars of extremism, anti-Semitism, and the Holocaust were dismayed, but not surprised, by what they saw that Wednesday.  For years, they have sounded alarm bells as incidents of anti-Semitism ticked upwards and virulent conspiracy theories, redolent of those that fueled Nazi Germany, spread online unchecked. With International Holocaust Remembrance Day on Jan. 27, many of them spoke with the Courier about their thoughts on the failed insurrection, the intersection of extremism and anti-Semitism, and the importance of Holocaust education.

Dr. Stephen Smith, the Finci-Viterbi Executive Director of the USC Shoah Foundation and UNESCO Chair on Genocide Education, told the Courier he sees echoes and patterns of the past in the riot on Jan. 6. He draws parallels not to Nazi Germany, but to the Weimar Republic. “We are living in a democracy which has been unhinged by groups who are, first of all, polarized, but increasingly extreme, and then using propaganda and lies in order to be able to get political results,” he said. Smith compares the storming of the Capitol to the Reichstag fire that razed the German parliament four weeks after Hitler’s election and set the stage for his consolidation of power. “In a sense, this crowd was following a very similar direction, and there’s no question, Trump didn’t need to give directions to that crowd to be giving them instructions.”

For Anti-Defamation League (ADL) Los Angeles Regional Director Jeffrey Abrams (Beverly Hills High School class of ‘85), the failure of the insurrection does not mean the end of these pernicious ideologies. “The anger and vitriol we saw on January 6th will not vanish anytime soon,” he told the Courier. “The conspiratorial, baseless narrative of a stolen election will continue to animate extremists for some time to come. The experts, analysts and researchers at ADL’s Center on Extremism are closely watching as extremists try to harness that anger for more nefarious efforts.”

Beyond a law enforcement approach, Abrams emphasized the importance of educating about the Holocaust as a tool to interrupt the cycle of radicalization. “We believe strongly that learning about the Holocaust and lessons of unchecked antisemitism and racism is one of the best ways to fight prejudice and discrimination, and to help ensure that genocide and such atrocities never happen again,” Abrams said about the ADL.

Waxman went even further, saying that education efforts should also include the United States’ own legacy of systemic discrimination. “We must learn from the bloody history of fascism and Nazism in Europe, and of white supremacism in the United States, that complacency or apathy can have devastating consequences,” he said.

“It's not about political consultants and political action committees,” Economy said. “It's just about people organizing who are passionately against a candidate.” 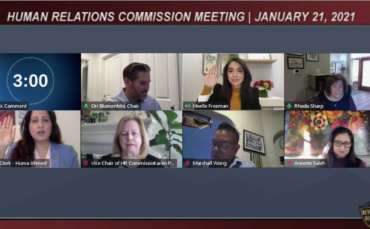