The vision of the much-anticipated Academy Museum of Motion Pictures came into much clearer focus this week. The Courier was amongst invited media attending a virtual tour and press update on March 10 that offered the most extensive preview to date of the museum’s design, mission and experiential tone.

The country’s largest institution devoted to the arts, sciences, and artists of moviemaking makes its formal debut on Sept. 30, 2021. Piano’s design has restored and revitalized the iconic Saban Building — formerly known as the May Company building (1939) — at the corner of Wilshire Boulevard and Fairfax Avenue. Together with a soaring spherical addition, the new museum will contain 50,000 square feet of exhibition spaces, two state-of-the-art theaters, an education studio, restaurant, retail store, and public spaces.

Movies will come home to the new museum. And they will do so in an immersive, dynamic format befitting a medium that has captured the world’s imagination since the latter part of the 19th century. The collections and expertise of the Academy of Motion Picture Arts and Sciences serve as the building blocks of exhibitions and programs. As moviemakers tell stories, so will the museum. The history, technology, artistry, social impact and even controversy surrounding films and filmmaking is on display. Cinematic icons, such as the sole surviving full-scale model of a shark (“Bruce”) from Jaws (1975) will undoubtedly appeal to the masses.

During the presentation, the museum announced a series of virtual conversations, screenings and educational programs to coincide with the 93rd Academy Awards on April 25. They are meant to be prologues to the museum’s core exhibition, “Stories of Cinema.” Shared voices of renowned film artists will explore the art, technology, history, and social impact of the movies. When the museum opens formally, it will offer a vibrant roster of programs, screenings, discussions and events designed to incorporate its facilities and the shared experience of the cinema. For additional information about plans for the Academy Museum and its inaugural exhibits, visit the website at academymuseum.org. 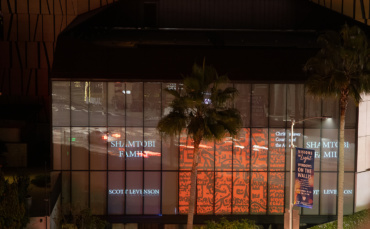 Visions in Light: Windows on The Wallis Open Now

The City of Beverly Hills and Wallis Annenberg Center for the Performing Arts have teamed up with TZ Projects to launch “Visions in Light: Windows on The Wallis.”