The federal investigation of the unassuming strip mall at West Olympic Boulevard and South Palm Drive has led to allegations of a criminal conspiracy to launder money and distribute illegal drugs. On April 2, federal prosecutors unsealed criminal charges against the safe deposit box business U.S. Private Vaults, claiming the company advertised itself to criminals as a safe place to store valuables and contraband. But according to a lawyer representing clients of U.S. Private Vaults, the government may have overreached in its efforts to uncover malfeasance.

Speaking on behalf of his clients, attorney Benjamin Gluck told the Courier, “Their concern is that the government, without any probable cause or suspicion, has taken away their property and announced that they won’t return it until my clients can prove that they are the ‘legitimate owners.’”

According to Gluck, though, people legally used U.S. Private Vaults for all kinds of legitimate purposes.  Now, they find themselves ensnared in what he describes as “an unconstitutional government fishing expedition at the cost of losing their possessions.”

On its website, U.S. Private Vaults touts safe deposit boxes “like those found at banks,” but with the promise of two differences: enhanced security and “complete privacy.” The business claims to keep no personal data except for encrypted biometric information used to access the safe deposit boxes. Entering the vault required no names; rather, U.S. Private Vaults employed a dual biometric security system. Normally, customers submit to an iris scan for access, but the store also uses hand geometry recognition as a “backup in case of severe damage or loss of eyes.”

As opposed to a fingerprint scan, a hand geometry reader measures the unique shape of one’s hand. Again, the company promises that hand shape information “is encrypted in a way that it may only be used to verify access to your box, not identify you.”

Furthermore, the business issued unmarked and unnumbered safety deposit keys so that “law enforcement could not determine that the keys unlocked safety deposit boxes at USPV,” according to the indictment.

U.S. Private Vaults states in its Frequently Asked Questions in no uncertain terms what cannot be stored in its facility: no “illegal drugs, weapons, ammunition, hazardous materials, illegal contraband and illegally obtained property or the products therefrom.” The company claims to conduct checks with dogs trained to detect drugs and hazardous materials.

However, the indictment claims that the business operated as a front for a drug dealing operation. It documents multiple interactions between unidentified employees and a confidential informant working with law enforcement to sell illegal marijuana products. In one such encounter on July 26, 2019, a “USPV Officer” sold the informant 1,000 vape cartridges containing THC in exchange for $8,000 in cash. The indictment alleges that the same employee sold an ounce of cocaine to “Confidential Informant 3” through intermediaries.

Obtaining a sealed criminal seizure warrant, agents with the FBI, Drug Enforcement Agency (DEA), and U.S. Postal Inspection Service (USPIS) spent five days removing the biometric scanners and the safe deposit boxes from the business. Over the course of the search, they found “firearms, illegal drugs, and… cash,” according to court filings. The most common item found was stacks of $100 bills, with one box containing more than $1 million.

“Drug detecting dogs alerted to most, but not all, of the cash stashes,” prosecutors stated.

The government has established a process by which clients of U.S. Private Vaults can reclaim their property. The catch: the formerly anonymous clients must provide their names.

Gluck represents multiple clients who claim their constitutional rights have been violated. He has filed cases on behalf of four of his clients, all of whom have used anonymous pseudonyms like John Doe, Richard Roe, and Michael Moe. In the case of John Doe, Gluck filed a Temporary Restraining Order to halt the search of the safe deposit boxes. But in another Catch-22, a judge declined the order because Gluck “failed to establish, let alone allege, what specific property and which boxes belong to Plaintiff.”

“The United States Supreme Court has said that the purpose of the Fifth Amendment is to protect innocent people in ambiguous circumstances. And the government has announced that they believe that everyone who kept the box there’s a criminal. They don’t have to go through that process, and we declined to participate in it.” 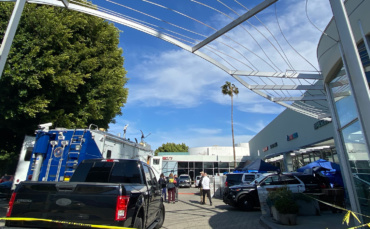 Advocates for Munoz alleged that the teen driver was not being charged because of the influence of his father, Beverly Hills resident and businessman James Khuri.