The suspect is identified as Lawrence Lawson, 29 years old of Los Angeles, California. Lawson’s bail has been set at $1,000,000.

On May 20 at approximately 1:45 am, the Beverly Hills Police Department (BHPD) responded to the rear of 200 N. Beverly Drive regarding an unresponsive male found bleeding from several wounds. The victim was treated by Beverly Hills Fire Department Paramedics and was transported to a local hospital where he is currently listed in stable condition.

Concurrent to the call on Beverly Drive, the Los Angeles Fire Department (LAFD) responded to a medical-aid call in the City of Los Angeles, approximately one and a half miles away from the Beverly Hills incident. The subject of the medical-aid call disclosed to LAFD personnel that he had suffered an injury in the City of Beverly Hills. BHPD Officers responded to the scene to investigate further. Following the investigation, the subject was placed under arrest for PC 664/187 – Attempt Murder and was transported to a local hospital where he received treatment for minor injuries. He was later booked at the Beverly Hills Police Department.

The suspect is identified as Lawrence Lawson, 29 years old of Los Angeles, California. Lawson’s bail has been set at $1,000,000. He is currently in custody at the Beverly Hills Police Department.  His next court date is May 24  in Department 30 at the Airport Courthouse.

Beverly Hills Police Department Detectives are actively investigating this incident, and announced in a statement on May 20 that access to Beverly Gardens Park and surrounding businesses may be impacted due to the ongoing investigation. The weapon used in this incident has not been recovered. This investigation is in the early stages, and there is no information regarding a motive at this point.

The BHPD encourages anyone with information about this incident to call them at  310-285-2125.  If you would like to remain anonymous, text BEVHILLSPD followed by the tip information to 888777.  You can also call Crime Stoppers at 800-222-8477.  To access Crime Stoppers, download the “P3 Tips” Mobile App or use the website http://www.lacrimestoppers.org. 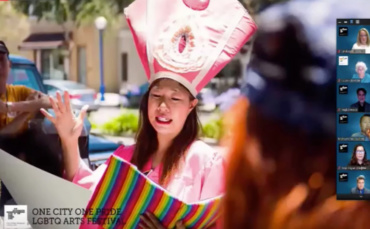 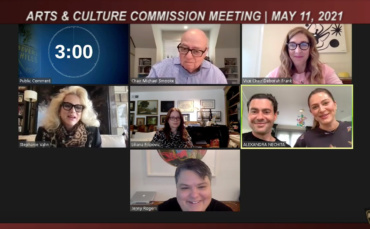 “I’ve got some great news for Tom Friedman,” Patty Acuna, Interim Assistant Director of Community Services, said. Friedman’s piece, “Takeaway,” is a 12-foot-tall stainless-steel sculpture of a man with takeout food boxes balanced on his head in Beverly Gardens Park.