The Beverly Hills City Council has closed in on the years-in-the-making moment of approving the massive One Beverly Hills project, a multi-billion-dollar luxury condominium and hotel development that includes renovations to the Beverly Hilton. In a series of 4-1 votes cast at the June 1 Formal Meeting, the City Council indicated majority support for the Supplemental Environmental Impact Report (EIR), General Plan Amendment, Overlay Specific Plan, and the development agreement. Councilmember John Mirisch cast the dissenting vote in each case. The Council will make final comments and officially approve the project on June 8.

The project will span 17.4 contiguous acres between Wilshire Boulevard and Santa Monica Boulevard and include 4.5 acres of public green space.

One Beverly Hills President Ted Kahan told the Courier he felt “a great sense of appreciation that city staff and the leaders of the city understand and have embraced the vision and that we can move forward with this project together.” Noting that the Council still has to vote on June 8, he added, “We have to wrap it up. We’re in the ninth inning, it only ends after the third out.”

Even after the resolution is affirmed next week, “There’s a lot more to go after this and we’re ready for that,” Kahan said.

One Beverly Hills built upon entitlements previously granted to earlier proposals on the same site. For the environmental review process, this meant that the city determined it did not need to conduct an entire review and could instead analyze the new proposed elements in a supplemental review. Even though the tallest buildings of the proposed project stand at 28- and 32-stories, the entitled square footage remains the same as prior projects. The City Council voted 4-1 for staff to draw up a resolution to certify the Supplemental EIR. Mirisch cast the only no vote, arguing for a new EIR as opposed to a piecemeal approach.

Again falling along a 4-1 vote, Mirisch qualified his opposition by saying that though he could not find the project consistent, One Beverly Hills “could be perhaps considered an exception.” But Vice Mayor Lili Bosse pointed out that California allows for four General Plan amendments per year as long as “one finds that it allows for a public benefit for the city or overriding considerations and such.”

Staff will draft a resolution to certify the project as consistent with the General Plan.

In the June 1 discussion of the conditions of approval, the Council agreed to allow a country club-style Amenities Access Program (4-1, Mirisch dissenting) and the timeshare-style fractional ownership program (3-2, Mirisch and Wunderlich dissenting), which would make 37 fully furnished residential units available to owners for 30-day increments. While Wunderlich granted that the fractional ownerships would likely bring in greater revenue, he thought it did not promote community given the transient nature of its occupants. Bosse countered that the program provided “an entry point” to joining the Beverly Hills community.

While the fractional ownership program received approval, the applicant will still need to return to the Council at a later date with a more flushed out plan. A spokesperson for the project said this would likely come back before the Council during the construction phase.

A number of conditions received unanimous support at the June 1 hearing. The Council supported transforming North Santa Monica Boulevard into a two-lane street with a protected bike lane; the Council agreed with a proposal by Wunderlich to conduct a traffic study on Merv Griffin Way to determine the optimal lane set up; and the Council unanimously approved the nonprofit conservancy that will oversee the project’s gardens.

A late change, is that the conservancy will have the right to hold six private events per year as long as they further its mission. The applicant will work with the city over the next several months to craft the details.

Another change came in response to concerns of accessibility to the gardens from Santa Monica Boulevard. Kahan unveiled renderings of an elevator and ramp immediately accessible to pedestrians coming via the south. This, too, received unanimous support from the Council.

An earlier meeting on May 27 picked up with an apology from Oasis West Realty CEO Beny Alagem, one of the project’s developers, who accepted responsibility for a letter sent by his attorney that pressured two residents to withdraw a public comment critical of him. The move came to light through Planning Commission Chair Peter Ostroff, who detailed the communication in a comment to the City Council.

“Over the weekend, I learned of a personal attack against me that contained statements that were just not true. It provoked a reaction and I feel bad about all that happened,” said Alagem. “But no matter how it happened, this is my company, and I take responsibility.”

By far the bulk of the conversation in the most recent meetings revolved around the development agreement—essentially a contract between the city and the controlling entities Oasis West Realty and BH Luxury Residences, which are owned by Alagem and London-based real estate firm Cain International. The agreement assures the developers that the city will not change pertinent regulations during the term of the agreement and will grant certain entitlements that would otherwise conflict with the city’s codes (excessive height, for instance). In return, the city can extract certain demands from the developer.

The draft development agreement presented to the Council was largely similar to a development agreement approved for a 2017 project at 9900 Wilshire Blvd., which is now part of the current One Beverly Hills site. That project, brought by Chinese real estate and media conglomerate Wanda Group, fell through before Alagem and Cain snapped up the property.

The marquee item of the draft development agreement, negotiated by an ad hoc team of city staff, council members, and attorneys, is a $100 million public benefit fee paid over eight years. According to Friedman, who served as City Council liaison on the ad hoc along with Bosse, the sum represents “the largest payment by a developer in the state and perhaps in the country.”

The fee would absolve the developer from the responsibility of providing affordable housing. As stated in the draft agreement, “Developer’s Public Benefit Contribution under this Agreement fully satisfies any and all affordable housing fees, or exactions, that are applicable to the Project during the Term.”

The project would also apply a 5% municipal surcharge (essentially a higher Transient Occupancy Tax) to the new Wilshire Building luxury hotel rooms, and starting in 2030, to the Beverly Hilton. Along with that, the project would pay EMS fees to the city, which will help recoup the revenue lost in allowing residential developments on commercial sites. In the development agreement, the city would receive 2% fees on first time sales and then 3% on subsequent sales.

These would generate revenues for Beverly Hills “in perpetuity” after their implementation, according to Director of Community Development Ryan Gohlich. According to Kathe Head of Keyser Marston Associates, who performed financial analyses for the city’s ad hoc negotiating team, the project would generate $1.7 billion in gross revenues for the city over the first 30 years.

Councilmember Julian Gold described the agreement as a coup for the city.  “We’ve heard from everybody that most cities on the planet would have paid to get this deal, and we reversed that and they’re paying us,” he said.

Bosse has been involved in negotiating other development agreements for the city, including the agreement for the Wanda Group project that preceded One Beverly Hills. She expressed unequivocal support for this deal, saying that the $1.7 billion in revenue will enable the city to construct “as much affordable housing [as] we want,” in addition to funding police and fire services, schools, and “everything in the quality of life that we love in our city.”

City staff who helped negotiate the agreement characterized the agreement as historic in the benefits afforded to the city. Bob Baradaran, an attorney with the law firm of Greenberg Glusker, et al., who served as special counsel to the city for the project, described the package of public benefits as “the most lucrative and richest direct public benefit package in favor of any city in the state of California and probably the country.”

Mirisch raised concerns that the development agreement does not do enough. Despite the nine-figure public benefit fee, the EMS fees, and the municipal surcharge, Mirisch argued that the development would not be paying its fair share to the city, especially in terms of affordable housing.

When it came to the final and least known vote, Wunderlich joined the majority in indicating support of the development agreement. He pointed out that the city was currently considering an affordable housing project on a city-owned site near Foothill and 3rd. “A portion of the funds from this project could go into making that a reality,” he said.

The City Council will cast the final votes on June 8, but they will not see the fruits of their deliberation for quite some time. At an earlier Planning Commission hearing, Kahan told the commissioners that he did not expect the project to break ground until “sometime in early 2023.” 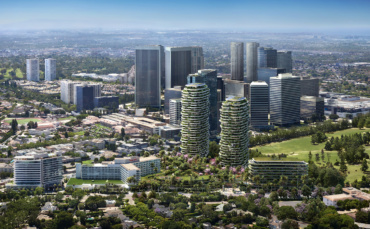 A luxury hotel and condominium development that would reshape the City’s western Wilshire Boulevard and Santa Monica gateways. 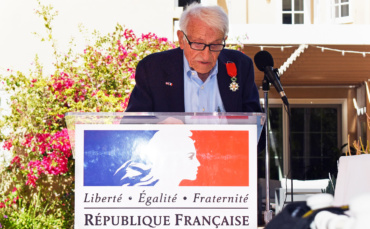 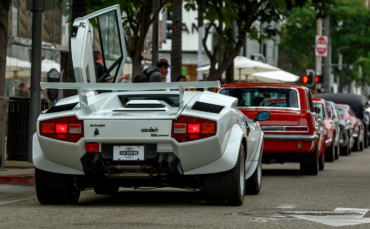