Public Health Studies Out of Cedars-Sinai and UCLA

“The perception that e-cigarettes are less harmful than combustible cigarette smoking may contribute to their appeal among pregnant women who have difficulty quitting smoking,” Regan said in a statement.

Cedars-Sinai and UCLA published studies this week addressing two critical public health issues. A new study out of UCLA raises questions about the risks posed by electronic cigarettes to newborns during pregnancy. Then, investigators at Cedars-Sinai published results of a study into the neurodegenerative disease Amyotrophic lateral sclerosis (ALS), suggesting that hyperactive immune cells in the brain may contribute to the development of the illness.

“This immune activity is detectable in laboratory mice even before damage to the brain occurs, so the finding could eventually lead to treatments that slow or even stop disease progression at an early stage,” Dr. Deepti Lall, the study’s lead author and project scientist in the Regenerative Medicine Institute at Cedars-Sinai, said in a statement.

Each year, 5,000 people in the United States are diagnosed with ALS, also known as Lou Gehrig’s disease. The disease is characterized by a progressive decline in muscle control, with a deterioration in the motor nerves that send signals from the brain and spine to muscles. While scientists don’t fully understand the causes of ALS, studies have established hereditary factors in five to 10% of cases.

The study sought to examine the role of microglial cells on the cognitive performance of mice. While the cells play an important role in the autoimmune defense system of the brain in both humans and mice, researchers looked specifically at mice with a genetic mutation commonly found in the genetic code of those with ALS. Mice with the mutation performed worse in a maze that measures learning and memory compared to mice without the mutation. Under a microscope, researchers found that the microglial cells of mutated mice were in a “hyper-active state”—not just cleaning waste around neurons but eating away at parts of the neurons themselves.

“Our findings underscore the critical role played by non-neuronal cells like microglia in neurodegenerative disorders and provide evidence that these cells can significantly contribute to disease development and in some cases can cause cellular defects before neuronal loss occurs,” said Lall. “We are currently expanding on these studies to validate our findings in human cells.”

At UCLA, a study published in the July issue of Obstetrics & Gynecology found that women who vape during pregnancy are 33% more likely to give birth to low-birthweight babies, those weighing less than 5.5 pounds. At that weight, newborns often demand specialized medical care and have a greater chance for early-life and long-lasting health issues, according to study author and Adjunct Assistant Professor of Epidemiology Annette Regan. The study pulled together researchers from University of San Francisco, Texas A&M University and the U.S. Centers for Disease Control and Prevention .

“The perception that e-cigarettes are less harmful than combustible cigarette smoking may contribute to their appeal among pregnant women who have difficulty quitting smoking,” Regan said in a statement. “These findings show that e-cigarettes should not be considered a safe alternative to regular cigarettes and that there are potentially very real health risks from vaping when it comes to pregnancy.”

The study comes on the eve of a crucial Sept. 9 deadline for the Food and Drug Administration (FDA) to decide the fate of the hugely popular e-cigarette Juul. The company Juul Labs, once a technology juggernaut, has faced mounting criticism and lawsuits accusing it of marketing towards teenagers and driving an epidemic of teenage vaping. The FDA must decide whether the benefit of the e-cigarettes as a cigarette alternative outweighs the harm caused by hooking teens on nicotine who had never smoked before. Juul Labs has denied that it knowingly sold or marketed its products to minors.

Much of this battle has taken place between the pages of scientific journals, with Juul going so far as to pay $51,000 to place 11 studies funded by the company in the May/June issue of the American Journal of Health Behavior, according to the New York Times. The arrangement with the journal led to the resignation of three editorial board members, the Times reports.

The city of Beverly Hills has taken an aggressive approach to curbing vaping and smoking within its boundaries. In 2019, Beverly Hills became the first U.S. city to ban the sale of most tobacco products, including e-cigarettes. To combat the surge in teen vaping, the Beverly Hills Unified School District launched in February 2020 a “multi-faceted educational campaign to eliminate student vaping.”

“We’re featuring summer colors and a collage-based background that highlights the various icons that make Beverly Hills what it is,” Julie Wagner, President and CEO of the CVB, said of the summer campaign. 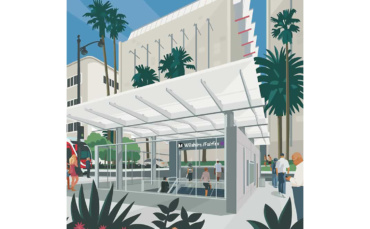 “We also are having material delivered to us, as well as equipment,” Ximenez added. “We're having ongoing concrete pours and those will be mostly daily from Wilshire Boulevard for the foreseeable future.”