On July 1, California’s Lieutenant Governor Eleni Kounalakis announced that a special recall election seeking to remove California Governor Gavin Newsom will take place on Sept. 14. The announcement came after Secretary of State Shirley Weber confirmed 1,719,900 valid signatures—far more than the 1,495,709 required to trigger a recall—were collected by the campaign to recall Newsom from office before his term ends in 2023. Nearly 60 candidates have filed to run in the recall election, including former San Diego Mayor Kevin Faulconer, 2018 gubernatorial candidate John Cox, former U.S. Rep. Doug Ose, Assemblyman Kevin Kiley, and Caitlyn Jenner. At the Tour d’Elegance car show on June 20, Jenner promoted her campaign for the gubernatorial recall election wearing a hat that read “Caitlyn for California” on the front. While every California governor since Ronald Reagan has faced a recall effort, most are unsuccessful, failing to collect the number of signatures needed to qualify. The only one that did make it to the ballot took place in 2003, when Governor Gray Davis was recalled a few months into his second term and replaced by Arnold Schwarzenegger. Newsom is the second governor in the state’s history to face a recall ballot.

On Sept. 14, California voters will have the option to vote “yes” or “no” to the question of whether to remove Newsom from office, and an opportunity to select a replacement candidate. Votes cast for a successor candidate will only be counted if more than 50 percent of voters casting ballots in the recall election vote to recall the Newsom.

The Recall Gavin 2020 campaign began gathering signatures in June of 2020. According to data released by the secretary of state’s office, L.A. County accounted for 264,488 of the 1,719,900 cumulative total of verified signatures.

The Role of the Freedom Rallies

Mike Netter, a co-founder of the Recall Gavin Newsom campaign, told the Courier, “We probably gathered about 15 to 20 percent of those signatures from the Beverly Gardens rallies. Netter was referring to the “Freedom Rallies” held on Saturday afternoons at Beverly Gardens Park began in mid-July of 2020, drawing as many 4,000 people.

“I began collecting [recall] signatures in June,” Beverly Hills resident Shiva Bagheri told the Courier. “Personally, I think I gathered around 500 signatures. I brought my clipboard inside my backpack to the park, so for anybody that wanted to sign, I just pulled it out. But I also went around Beverly Hills. I remember walking towards a restaurant and probably like ten people who were sitting outside signed it.”

“The rallies were a celebration of America, freedom and Donald Trump, who, as president, embodied classical American values and worked to root out the corruption that has plagued our government for far too long,” a Beverly Hills resident told the Courier. “I was not planning on signing the recall petition before I went to the rally. But, because of Newsom’s non-sensical shutdowns and mandates which destroyed small businesses and so many people’s lives, I gladly signed it.” The resident will be supporting Larry Elder to replace Newsom.

Supporters of the recall campaign believe the effort will be a success due to heightened political awareness after a presidential election and lingering outrage regarding Newsom’s handling of COVID-19 closures and restrictions. However, recent polls conducted by the Berkeley Institute of Governmental Studies found that Newsom still has an overall positive approval rating. Findings show that support for the recall is at 36 %—unchanged from late January—and a four-point increase (49 % in the number of voters that intend to vote “no” in the recall. Another 15 % of voters remain undecided.

The poll also found early interest in the gubernatorial recall skewed toward GOP voters, with twice as many Republicans (75 %) reporting a high degree of interest, versus Democrats (36 %) or No Party Preference voters (35 %).

“Beverly Hills is kind of a funny area because people are really scared for the most part,” Netter told the Courier. “People are worried about being blacklisted by the government and they’re afraid to talk. People have this perception in the movie business that if they speak their mind and they’re not liberal, they get blacklisted.”

As of July 15, a number of posts circulated around pro-Trump social media accounts declaring the resumption of weekly rallies at Beverly Gardens Park starting July 17.

“The rallies were so inspiring for a brand-new citizen and a tremendous display of this great country’s First Amendment,” a Beverly Hills local, who works in the entertainment industry and asked to remain anonymous, told the Courier. “We the people rule this country, not the corrupt politicians and the administrative state.”

While polling suggests that Newsom will likely survive the recall, Netter said: “It’s going to be a much closer election than everybody thinks. I still feel that Gavin is going to get removed from office because every day he does something stupid that shows he’s a bad governor. This isn’t about Democrat or Republican, it’s about a governor not listening to the people, the average everyday people in his state.” 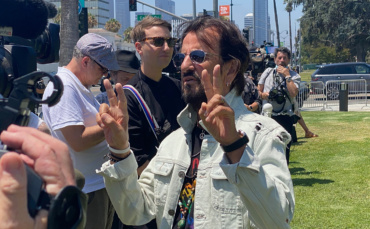 Happy Birthday Ringo and all the best and brightest wishes! Thanks to you, our world is a better place! 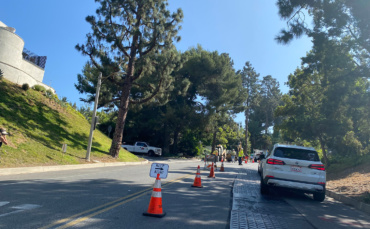 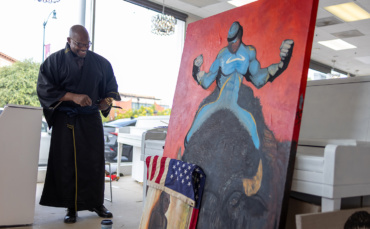 The Courier obtained an early preview, sitting down with artist Chaz Guest as he began painting a piano with his comic book character Buffalo Warrior, the first superhero “born in the cotton fields.