Manaster said he is considering reinstating the Budget Review Committee, a defunct commission of Council-appointed residents with business background who review the city’s budget.

Former BHUSD President and Traffic and Parking Commission Chair Jake Manaster announced Aug. 12 that he will be running for Beverly Hills City Treasurer in the 2022 elections.

A resident of Beverly Hills for over 20 years,  Manaster is a lawyer who is currently president and CEO of Contract Carpet Corporation, a 55-year-old flooring business. He served on the Beverly Hills Traffic and Parking Commission from 2014 to 2020 and chaired the Commission in 2016. He also served on the Beverly Hills Unified School District Board from 2009 to 2013, serving as President in 2012-13. During his tenure, the BHUSD Board created a district-wide $10 million endowment reserve and helped stabilize a budget shortfall.

Manaster said he wants to use that financial acumen to help a city still recovering from the pandemic. “This last year and those soon to come have seen unprecedented challenges and extraordinary financial and social impacts,” Manaster said in a statement. “As Treasurer, I intend to support the city’s team in any way I can to accelerate the recovery and bring access to resources. Due to the pandemic, many projects and initiatives were put on hold. Supporting city staff in their endeavor to carry out the wishes of the City Council while also keeping city coffers safe and protected is the goal.”

Manaster said he is considering reinstating the Budget Review Committee, a defunct commission of Council-appointed residents with business background who review the city’s budget. “Former Treasurer Eliot Finkel organized and led just such an instrumental committee as the Great Recession hit, and with the challenges of COVID and our new need to budget for a new future, the expertise of Council-appointed former city officials seems to carry particular importance at this moment,” Manaster told the Courier.

Manaster may be running against current Treasurer Howard Fisher, who has not yet announced whether he will run for reelection in 2022. He has received endorsements from current BHUSD Board Members Noah Margo and Tristen Walker-Schuman, former Board Member Howard Goldstein, former Councilmember and Mayor Les Bronte, and others.

In addition to his work with the city, Manaster is an attorney specializing in business, entertainment, and intellectual property law. He served many roles at the Sony Corporation, including executive posts in corporate development, finance, and legal affairs. He also served as Acquisitions Vice President for ClickStar, an online movie distribution cofounded by Morgan Freeman. He serves on the board of directors for several businesses, trade organizations, and nonprofits.

Manaster holds a BA from UCLA and a JD from Case Western Reserve University Gund School of Law. He briefly served as an adjunct law professor at Case Western. 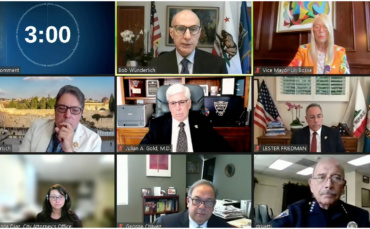 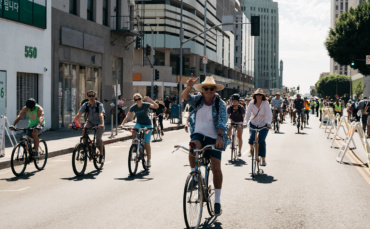 “This is an opportunity for us as a community to show how getting on a bicycle and using other modes of transportation is encouraged,” Councilmember Lester Friedman said, while suggesting sponsorships at the western Beverly Boulevard terminus.

“We are a small but mighty commission...our charge is to help protect the citizens from fraudulent charities,” Kraushaar said.