Walker-Shuman Resigns From BHUSD School Board

Tristen Walker-Shuman, the embattled Beverly Hills Unified School District (BHUSD) Board of Trustees Vice President, tendered her resignation on Sept. 22, ending weeks of controversy surrounding her residency status. The issue of Walker-Shuman’s residency surfaced publicly last month. An anonymous complaint sent on Aug. 26 to multiple newsrooms and governmental agencies claimed that Walker-Shuman had moved from Beverly Hills to Pittsburgh sometime that month. While the complaint argued that the alleged move disqualified Walker-Shuman for her position, the Vice President remained steadfast that she met the legal requirements for residency.

Walker-Shuman said in a statement that she opted to step down because of the growing personal cost of the controversy and the cost to the district. “I am no longer willing to sacrifice my personal peace, my family or my time to oppose the current malign efforts. This manufactured issue has become an untenable distraction at a time when all of our efforts should be focused on servicing our students and recovering from the ongoing pandemic,” she said.

“I have dedicated myself to tirelessly serving the district, our students and families for years at great sacrifice and personal expense. I am proud of the work accomplished over the last three years, BHUSD has never been in a better fiscal position, our construction program is humming, we have expanded pathways and opportunities for students in addition to supports through reconfiguration.”

The news of the resignation first broke in a statement from Superintendent Dr. Michael Bregy, who did not allude to the circumstances of her departure. Instead, Bregy thanked her for her years of contributions to the district.

“Before her time on the Board of Education, she was instrumental in the reconfiguration of BHUSD in her capacity on the Future Focused Schools Team,” Bregy said. “Mrs. Walker-Shuman has volunteered as a parent, community member, and finally a board member. Whether in the boardroom, construction site, or sidewalk assisting students with safe drop-off, the impact Mrs. Walker-Shuman has had on BHUSD will always be remembered.”

Bregy said that the district would communicate the next steps to the community regarding the vacancy “[i]n the coming days and weeks.”

Walker-Shuman’s term was scheduled to end in December 2022. According to the school board bylaws, the board must order a special election or make a provisional appointment to fill a vacancy that occurs four or more months before the end of a board member’s term. This decision must be made within 60 days of the vacancy.

School Board President Rachelle Marcus, who at times found herself at heated odds with Walker-Shuman in the closing days and months of her tenure, reiterated Bregy’s statement. She added: “Contrary to any other public statements given, Mrs. Walker Shuman’s resignation reflects the facts and issues that were clouding her true residency and ability to legally serve on the board.”

While questions about her residency had been circulating for months, the 21-page complaint included detailed allegations and exhibits. Among the documents were exhibits that appeared to indicate ownership of two properties in Pennsylvania by Walker-Shuman and her husband, David Shuman.

The District Attorney’s Public Integrity Division, which receives complaints regarding public agencies, conducted a preliminary review of the matter to determine whether there was probable cause to believe that a crime had occurred. The District Attorney’s office told the Courier that the Public Integrity Division closed the matter and that no further action would be taken.

But even though the District Attorney’s office determined the matter inappropriate for a criminal forum, the allegations nonetheless raised concerns among members of the community and the school board itself. In a closed session meeting on Sept. 14, the school board agreed to initiate an investigation with private counsel into Walker-Shuman’s residency.

As recently as the public school board meeting that same day, Walker-Shuman rebuffed the complaint and the resulting questions as “a purely political stunt perpetrated by social terrorists designed to harass me by weaponizing my personal life.”

Board member Noah Margo, largely seen as a supporter of Walker-Shuman throughout the ordeal, echoed Walker-Shuman’s tone at its conclusion. “Whoever dares to claim victory from this tragic turn of events has no idea what the community has lost,” he told the Courier in a statement. “There is no doubt of the remarkable depth of Mrs. Walker-Shuman’s service to our district, just as there is no doubt as to the motivations that drove the unvalidated accusations and the horrendous smear campaign that followed.”

Board member Dr. Amanda Stern told the Courier that she wanted to “acknowledge that Ms. Walker-Schuman chose to return our focus to the needs of our students and the challenges of the pandemic.”

“Her contributions and hard work will not be forgotten,” she said.

Similarly, board member Mary Wells expressed gratitude to the outgoing Vice President’s service. “I am pleased that the issues surrounding her residency will no longer concern the board, allowing the board to focus on the critical issues facing BHUSD,” she told the Courier. 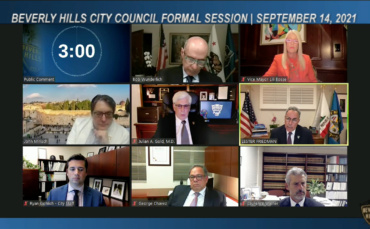