Currently vacant, the multi-family, period revival style residences in question date back to the 1930’s and were identified in 2014 as a National Register-eligible historic district, with two structures built by Edith Mortensen Northman, the first woman to be a registered architect in Los Angeles. The 300 block of North Oakhurst made headlines in 2017, after the City Council voted unanimously to deny a 31-unit condominium project that would have bulldozed the three structures. The site is located at the eastern border of Beverly Hills, between Alden Drive and West Third, straddling the city boundaries of Los Angeles, too. The item was requested by Councilmember John Mirisch.

The original request for the fencing and gates within the front yard of the existing multifamily residential property went to the Architectural Commission on Aug. 18 and received conditional approved on Sep. 20 in a three to one vote.

The fence was approved under conditions set forth by the City’s Urban Designer, which include pilasters at the northern and southern termination points, planting certain Bougainvillea species and that the fence does not exceed four feet in height. While early designs feature wrought iron materials in matte black finish, a final landscape plan will be provided to the commission in the future.

During public comment, several residents voiced opposition, arguing that “young families are not going to spend $8,000 a month for a two-bedroom apartment that has only one parking space.” Concerns regarding the developer (Oakhurst LLC) skirting city process and procedure were also raised.

“The aesthetics making this neighborhood unique, date back almost 100 years, and are the result of a symmetry of compatible architecture landscaping, creating an openness and spaciousness with much natural light and airflow,” Robert Block, a resident on North Oakhurst, said. “It is a perfect example of the city’s description of its neighborhoods: the kind of bucolic smalltown lifestyle, a serene, peaceful, pastoral environment with open accessible views of the beautiful homes and similar front landscaping.”

“If approved,” Block added. “This will become a blueprint for other developers to destroy the charming beauty of this unique neighborhood, and at the same time, remove one of the city’s last desirable, historically significant, and affordable rental communities.”

“The fence crosses three individual parcels on a continuous basis,” neighbor Steve Mayer said. “That is unprecedented in the city, and it was done by a law breaker. He did the interior demolition, down to the studs, without permits from either City until almost after the fact.” Mayer expressed frustration over the commissioner’s limited authority, which only allows them to judge aesthetic matters, not code compliance. 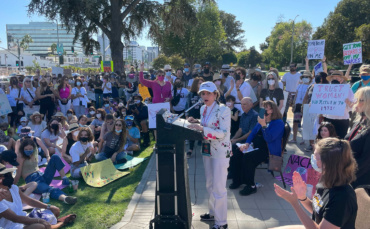 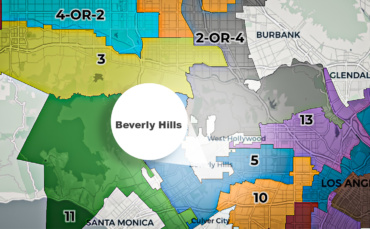