Dominick Rivetti, the interim Police Chief of the Beverly Hills Police Department, sought to reassure residents and visitors about the city’s safety following the recent high-profile armed robbery in the Business Triangle. In an appearance at an Oct. 26 City Council meeting, Rivetti reviewed the existing measures already in place in addition to committing more resources toward security.

“This is a very, very safe city,” Rivetti said. “All I can say is the Beverly Hills Police Department is second to none. We do a great job of protecting the city. The men and women of this department work very, very hard to keep Beverly Hills safe.”

Rivetti’s appearance follows a shooting that took place in front of the restaurant Via Alloro on Oct. 19, leaving one man with a non-life threatening gunshot wound to his leg. Authorities have described the incident as an attempted robbery. Rivetti did not report significant updates in the case, but told the Council,“we are working diligently to solve that crime and we are making progress.”

“In addition to that, we added additional resources through Covered 6,” Rivetti said, referring to one of the two private armed security firms contracted by the city. “They now have three vehicles just in the Business Triangle for 10 hours a day. Two of the vehicles are two man units and what we’re asking them to do is each of them put one officer on the street to walk a foot beat while the other security officer does patrol in the marked security vehicles.”

According to Public Information Officer Lt. Giovanni Trejo, the city’s private security contractors did not participate in the response to the shooting.

The department has also put more BHPD officers on foot beats, bike patrols, and police car patrols in the Business Triangle. When other units are not answering calls or dedicated to another area, the department has instructed them to “drive through the Triangle and provide extra coverage and visibility,” Rivetti said.

The enhancements bring the Business Triangle security presence from two Covered 6 officers to five. The Covered 6 guards will patrol the area until midnight, while the additional BHPD officers will patrol until 10 p.m. Rivetti clarified that BHPD patrols regularly assigned to the Triangle will be present 24 hours a day.

“We’ve asked them to stay very visible, don’t get involved in minor things, and interact with the merchants and tourists and the public,” Rivetti said.

Rivetti told the Council that the additional BHPD resources dedicated to the Business Triangle would not siphon away officers from residential areas.

The city has remained on high alert since the civil unrest in May 2020 led to looting and vandalism in its Golden Triangle. The subsequent tensions brought by ongoing rallies led the city to enlist the aid of two private armed security companies, Covered 6 and Nastec International. As of June 1, the city had spent around $5 million for private security.

At the same time, the city has seen several high-profile robberies in its commercial corridors. In an incident described by Rivetti at the time as “brazen,” three individuals stole a $500,000 watch at gunpoint in March at Il Pastaio. The robbery, which took place in broad daylight, left one patron with a minor injury when a gun went off. In the immediate aftermath of the robbery, the city boosted the number of private security officers in the area.

Rivetti seemed to attribute the crimes to progressive policies enacted in the state over the last few years. “Our criminal justice system in California and particularly here in L.A. County can only be described as broken. Oftentimes, in many cases, there’s just no consequences for criminal behavior,” Rivetti said. “[There’s] been a steady erosion of public safety in California for the last several years and it’s impacting all communities, including Beverly Hills.”

According to the most recent department data, overall crime remained down 5% in September compared to a year ago.

While Rivetti thanked the Council for its support of law enforcement, he added that the department has “quite a few openings.” He said the department is developing an advertising campaign to recruit new officers. “We might be coming to you with some suggestions on how we can enhance our recruitment program,” he said.

Mayor Robert Wunderlich praised Rivetti and the department “for all that they do to keep us safe,” adding: “Safety is a hallmark of Beverly Hills, for our residents and for our businesses, and we are committed to doing what we have to do…to keep that true.” 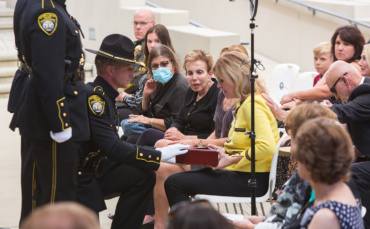