“This is about making America live up to its creed that we don’t allow you to treat Black and brown people differently than you treat white people,” said civil rights attorney Benjamin Crump at an Oct. 27 press conference announcing the new claims.

A supplemental governmental claim filed on Oct. 24 against the Beverly Hills Police Department alleges racial profiling against a Black driver and passenger in August 2020. The allegations join others as a part of a proposed class action lawsuit that accuses the BHPD of conducting racially biased policing through a task force convened in the late summer of 2020.

“This is about making America live up to its creed that we don’t allow you to treat Black and brown people differently than you treat white people,” said civil rights attorney Benjamin Crump at an Oct. 27 press conference announcing the new claims.

The suit centers around the Rodeo Drive Team, a task force convened on Aug. 29 until Oct. 24 that patrolled the Business Triangle. According to internal documents obtained by the Courier, the Rodeo Drive Team was formed in response to “an increase in calls for service in the Business District” for mostly so-called quality of life violations, including jaywalking, marijuana consumption, playing loud music, and skateboarding.

But the task force quickly found itself playing defense against an unprecedented surge of unemployment insurance fraud. Within five weeks, the Rodeo Drive Team recovered over $250,000 in cash along with fraudulent unemployment insurance cards with a potential value of $3 million. The majority of the 90 arrests made by the Rodeo Drive Team resulted in charges for identity theft.

According to BHPD records first reported by the Courier, 80 of the 90 people arrested were Black.

“Beverly Hills is only 2% Black. Our state is only 13% Black. Why were 90% of the arrests African American?” attorney Bradley Gage, who has represented over a dozen former BHPD officers and employees in lawsuits against former-Police Chief Sandra Spagnoli, said at the press conference. “You can’t justify that.”

The new governmental claim filed on Oct. 24 alleges that BHPD officers made a racially-motivated traffic stop of Joseph Nett and his girlfriend Lakisha Swift, both of whom are Black. On Aug. 5, 2020, Nett and Swift were driving through Beverly Hills to the beach when they were pulled over for allegedly stopping three inches over the limit line.

“I was a passenger in my girlfriend’s car and we were on our way to the beach, when, out of nowhere, we were suddenly pulled over, handcuffed, and humiliated for no reason,” Nett said at the press conference.

In the course of the stop, the officers discovered a restraining order against Nett by Swift, prompting them to detain him. Gage said that Swift told the officers that the order was no longer necessary. Nett remained in detention for over three days, the claim alleges, at which point police released him without charging him with a crime.

In a statement following the press conference, Beverly Hills Chief Communications Officer Keith Sterling said, “The members of the Beverly Hills Police Department take an oath to protect human life. The Department’s practice is to contact and question individuals when it is believed they may be involved in criminal activity or another violation of the law.

“It was determined that Mr. Nett was in violation of a restraining order obtained by the female driver,” Sterling said about the incident. “While the woman indicated she did not wish to press charges, for her safety and according to the law, Mr. Nett was taken into custody.”

A governmental claim must be filed before a lawsuit can be brought against a governmental entity. While Nett and Swift’s detention came several weeks before the formation of the Rodeo Drive Team, the claim asserts that the interaction demonstrates that the department was targeting African Americans for “driving while black” for years. 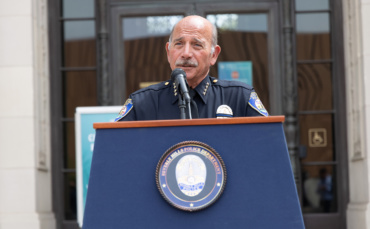 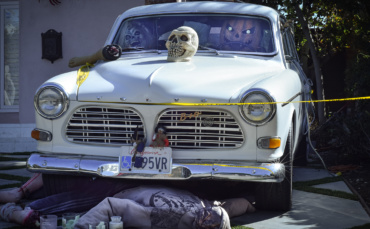 From life-sized horse skeletons to homicidal ghouls behind the wheel of a car, it is the spookiest time of year as Halloween decorations descend on Beverly Hills neighborhoods.