“I understand that there is a desire to give more people access to the beauty and the history of Virginia Robinson Gardens and a house which is a treasure,” said Councilmember John Mirisch. “But parties, events, commercial uses  — that’s really going overboard.”

At the Dec. 7 Study Session, the Beverly Hills City Council addressed a brewing controversy over changes proposed by the County of Los Angeles to the operation of the Virginia Robinson Gardens. Then, the Council set the city’s default energy rate to 100% renewable energy sources, up from its previous default of 50%. Finally, the city renewed its commitment with Vanity Fair to allow its lavish annual Oscar party on the 400 block of North Crescent Drive for the next three years.

The Virginia Robinson Gardens, the six-acre property that abuts the Beverly Hills Hotel and is listed in the National Register of Historic Places, has become the focal point for a controversy pitting Beverly Hills against the county. In early November, the county announced a proposal to expand public access to the facilities, immediately raising concerns among neighbors about the impact the changes could have on the area.

The Virginia Robinson Gardens are currently open to up to 100 members of the public a day from Monday to Saturday from 9:30 a.m. to 4 p.m. The county can host four special events per year on the grounds. The gardens have 35 parking spaces on site.

Under the county’s proposal, the gardens would be open to 200 visitors a day from 9:30 a.m. to sunset. In a notice of the proposal, the county’s Department of Park and Recreation promises that the guests would be “spread throughout the day for either tours, meetings seminars/classes, events or commercial filming (video only, no motion picture) or a combination of any of these activities.” Additionally, the grounds would be opened up to family ceremonies, such as weddings.

“I understand that there is a desire to give more people access to the beauty and the history of Virginia Robinson Gardens and a house which is a treasure,” said Councilmember John Mirisch. “But parties, events, commercial uses  — that’s really going overboard.”

Dozens of community members called into the meeting to express similar sentiment. (As a neighbor of the gardens herself, Vice Mayor Lili Bosse recused herself from the discussion.)

One neighbor, Anthony Spencer, explained that he and his wife purchased their house near the gardens for the quiet neighborhood. “I believe that I’m entitled to quiet enjoyment of my home,” he said. Spencer listed concerns about the noise and the number of cars that would come into the area.

The 1911 mansion and grounds that comprise the Virginia Robinson Gardens once belonged to retail magnates Virginia and Harry Robinson of department store fame. Prior to the death of Ms. Robinson 1977, she bequeathed the property to the county for its continued enjoyment by the public.

The City Council voiced universal concern over the changes. Council members requested that City Attorney Laurence Wiener review the condition of Ms. Robinson’s original bequest to ensure that the proposal does not violate the terms.

“A sixfold increase in the number of events just seems way out of line,” said Councilmember Lester Friedman, who supported drafting a position letter to the county in opposition to the project.

Councilmember Julian Gold described the proposal as “outrageous” and suggested a series of measures to protect the neighborhood if the county moves ahead with the proposal.

“We need to restrict parking on every one of the streets that’s around there,” Gold said. “I don’t care if we post somebody from [the Department of Transportation] to stand there and ticket everybody as they leave their car.”

The county is accepting public comments on the proposed changes for a Supplemental Environmental Impact Report (SEIR) through Dec. 16. A Draft SEIR will be available in April 2022.

The city will continue to monitor the project and staff will report back to the Council with possible avenues of recourse as the county moves forward with the EIR process.

The Council also moved the city closer to its sustainability goals by setting its default energy rate to 100% renewable energy sources starting Oct. 1, 2022. Previously, members of the community were automatically set to receive 50% of their energy from sustainable sources.

The city is a member of the Clean Power Alliance, a cooperative of 30 cities and Los Angeles and Ventura counties that buys power generated by renewable sources. As a member of the group, the city can select the default level of how much of its energy comes from renewables, with different costs associated with each level. Residents or businesses can select higher or lower levels, or opt out altogether and purchase energy from Southern California Edison—otherwise, they will receive the default amount chosen by the city.

The city formerly opted to set 50% as the default level. Starting on Oct. 1, 2022, the city will join the ranks of Santa Monica, Culver City, West Hollywood and 12 other municipalities that set a 100% default level. According to a staff report, those 15 municipalities see participation of nearly 95% of customers.

“If this is burdensome for people based on today’s numbers, they have the ability to choose the level at which they’re comfortable, and that will not change,” said Gold, though he added that he expected the cost of energy through the Clean Power Alliance to fall below Edison within the next few years.

“There’s nothing else we can do that will have the impact that this decision tonight has,” Gold said. “I really do believe that this is a question that only has one answer. It’s an obvious answer: Yes.”

The city will now educate the Clean Power Alliance of its decision and, in conjunction with the Alliance, will begin an education campaign to notify community members of the change.

Finally, the City Council voiced unanimous support for another 3-year commitment with Vanity Fair to allow the glossy to host an Academy Awards after party on the 400 block of North Crescent. The commitment is non-binding and the event will come before the City Council each year for approval.

“It’s mutually beneficial. It’s beneficial for the city and it’s beneficial for Vanity Fair,” said Mayor Robert Wunderlich. “It adds to and it maintains the position of Beverly Hills as being prominent in the entertainment industry, it being the premier location for truly special, special events. It’s an attractor for visitors and support for our businesses.”

While dates have not been selected for 2023 and 2024, the party is scheduled to take place next year on March 27. 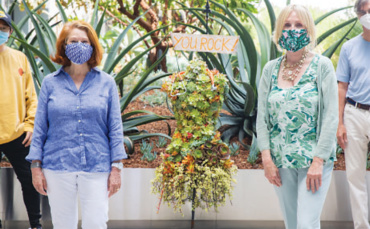 Cedars-Sinai Heroes Get Floral Tribute from the Virginia Robinson Gardens

To demonstrate the siren for residents who are interested in hearing the new OWS firsthand, the city has planned in-person meetings on Dec. 13 at Roxbury Park at 4 p.m. and Dec. 15 at Greystone Mansion at 10 a.m. 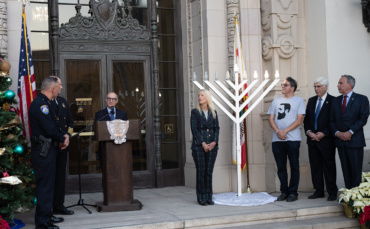 Beverly Hills marked the third night of Hanukkah with a ceremonial menorah lighting on the front steps of City Hall. The event marked the second time the city held a menorah lighting—an annual tradition established only in 2019 and interrupted last year by the pandemic.