The Beverly Hills City Council unanimously passed a resolution backing the latest attempt to recall Los Angeles County District Attorney George Gascón. In an effort to wrest some measure of local control from the DA, the Council also further explored the creation of a city prosecutor to handle state misdemeanor charges. The City Council previously passed a vote of no confidence in the new DA last March in a 3-2 vote. 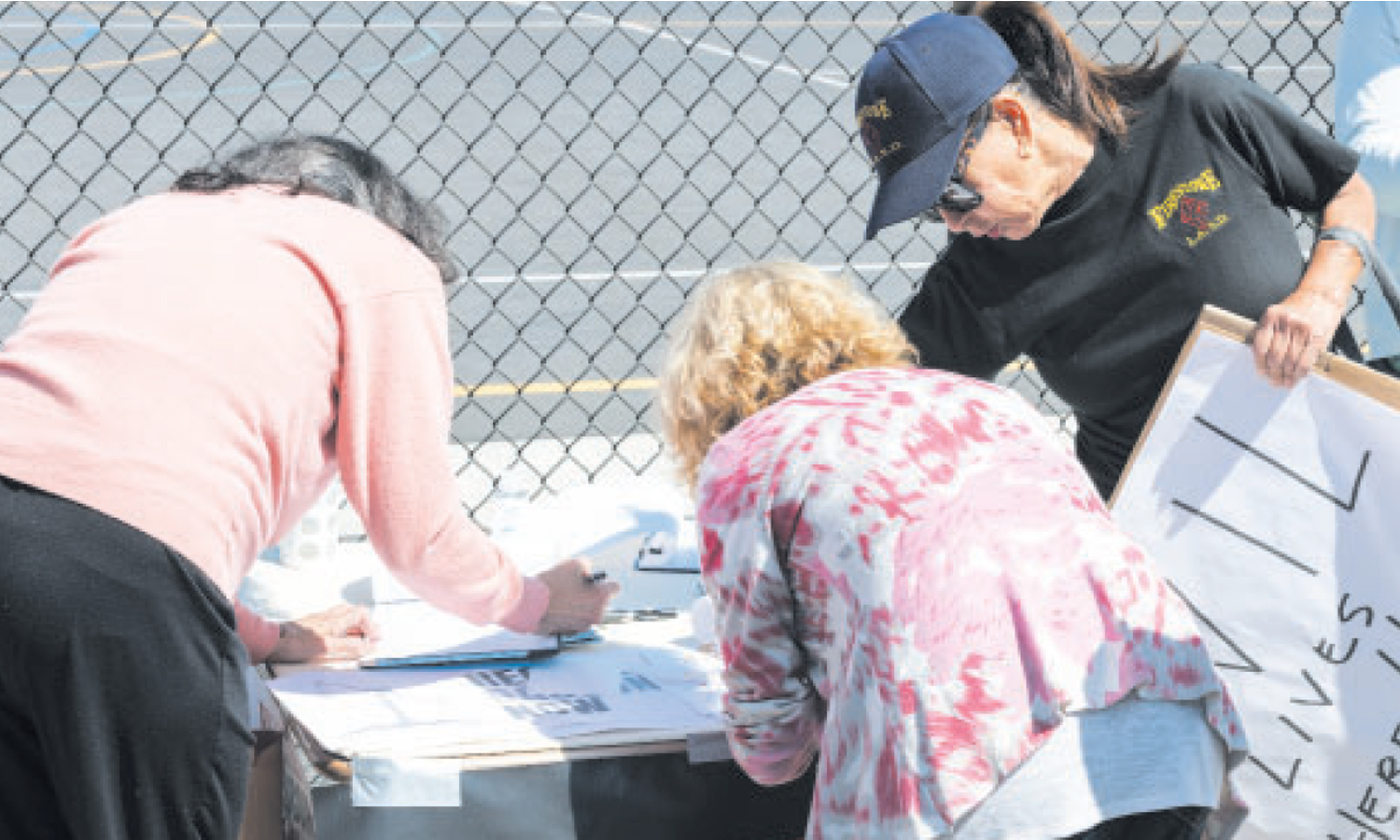 Supporters of the first attempt to recall Gascón gather signatures across from his house. Photo by Samuel Braslow

The resolution cites “three Special Directives of concern to the City” as its basis. In his first day in office, Gascón issued a handful of policy directives, including: ending cash bail for misdemeanors, non-serious felonies, or non-violent felonies; dismissal of certain misdemeanors, absent “exceptions” and an end to the use of most sentencing enhancements. Gascón also announced that his office would no longer seek the death penalty and would work to convert former death penalty sentences to life without parole.

Members of the City Council argued that these policies have contributed to recent instances of crime in the city. “District Attorney George Gascón believes he has good intentions, but what he fails to realize is that the unintended consequences overtake his intentions,” said Councilmember Lester Friedman.

Beverly Hills Police Department (BHPD) Chief Mark Stainbrook described a “frustrating” dynamic in which officers arrest suspects and the DA’s office declines to pursue charges. Between 2020 and 2021, the department filed 839 cases with the DA’s office, including 167 felonies and 346 misdemeanors.

“Almost 200 of those cases were rejected,” Stainbrook said.

Stainbrook reiterated a common point of criticism against Gascón, arguing that the elimination of cash bail had allowed suspects to return to the streets to commit more crimes. He described one case in which BHPD arrested a juvenile “for being involved with robberies,” but then arrested the same juvenile 30 days later “because he was immediately released from juvenile detention.”

A BHPD spokesperson could not verify details of that case, citing the ongoing investigation and confidentiality in juvenile matters.

The language of the city’s resolution cites the recent murder of philanthropist Jaqueline Avant, who was killed in the early morning of Dec. 1 in her Trousdale home. The suspect arrested for the crime, Aariel Maynor, had a lengthy criminal record that predated Gascón’s tenure.

Mayor Robert Wunderlich acknowledged in an interview with the Courier that “the decisions that were made about [Maynor] were made pre-Gascon and not by Gascon.” He did add that the murder of Avant represented a case in which Gascón failed to “make people feel that they’re safe.” In a town hall in December, Stainbrook shared that property crime in Beverly Hills fell by 7% while violent crime rose “significantly” from 2019 to 2021.

The uptick is not unique to Beverly Hills.

Data released by the FBI for 2020 showed a rise in crime nationally. In line with the trends experienced by the city, the country saw a 7.8% decrease in property crime and a 5.6% increase in violent crime, according to the FBI’s Uniform Crime Report.

While the resolution supporting the recall passed unanimously, back in March, Councilmember John Mirisch and then-Vice Mayor Wunderlich voted against passing a vote of no confidence in Gascón. Although both Mirisch and Wunderlich expressed opposition to Gascón and his policies, neither felt that the vote was an appropriate vehicle for their disagreement.

“I agree that we have to protect our community, but I think we can send messages without undermining democracy,” Mirisch said at the March 16 meeting. In explaining his recent vote in support of the recall, Mirisch pointed the Courier to his suggestion at the time that a voter-led recall would be a better alternative.

At the March 16 meeting, Wunderlich said that the resolution should focus on Gascón’s policies, not on Gascón as “an individual.”

“When we’ve disagreed with certain policies from L.A. County or from Sacramento, we didn’t vote no confidence in the elected officials. We opposed the specific policies that we disagreed with,” Wunderlich said at the time, adding that he was not a supporter of the new DA and had voted for Gascón’s opponent, incumbent Jackie Lacey.

This week, Wunderlich told the Courier that he had switched positions in response to Gascón’s refusal to change his policies. “In the face of someone who isn’t open to trying to eliminate the negative consequences of what he’s doing, it becomes a situation in which the remedy that’s available to deal with these things with the urgency that’s required is, in this instance, to go for the recall,” he said.

This is the second attempt to oust Gascón from office. An earlier effort in 2021 failed to attract significant funding or gather enough signatures to qualify for the ballot.

In its first unsuccessful run, the recall campaign collected just over 200,000 signatures.

Three of the co-chairs of Recall District Attorney George Gascón called into the City Council hearing, including Tania Owen, a former Los Angeles County Sheriff ’s Department deputy. Owen recounted how her husband, Sgt. Steve Owen, was shot and killed while responding to burglary in Lancaster. Prior to Gascón, the assailant faced the possibility of the death penalty. Once Gascón took office and implemented his directives, he received a life sentence without the possibility of parole. Owen described Gascón as “a domestic enemy.”

“There is no rhyme or reason for what he is doing other than to embolden criminals,” she said.

Former District Attorney Steve Cooley, another co-chair of the campaign, appeared remotely in the hearing to take fire at Gascón’s policy instructing his prosecutors not to attend parole hearings or argue against release of felons — another one of his special directives.

“This has never happened before in Los Angeles County’s history,” Cooley said.

In his directive laying out the policy, Gascón argued that “parole is an effective process to reduce recidivism, ensure public safety, and assist people in successfully rejoining society.”

Along with Cooley, dozens of others called or wrote into the meeting to express displeasure with Gascón. Callers identifying themselves as residents of Beverly Hills said they were fearful of taking walks in the city or allowing their children to play outside unsupervised. One resident, Randy Simon, said he lives near the Trousdale home of Avant and recently purchased a gun and installed a fence and gate. Other callers raised the prospect of leaving the city or even the state altogether.

While Beverly Hills cannot elect its own district attorney, the city can request to handle prosecution of state level misdemeanors — a request decided by Gascón. This would include prosecution of drug possession for personal use, theft below $950, or assault and battery that does not involve a deadly weapon or serious injury. In most cases, the maximum penalty for state misdemeanors is a $1,000 fine and/or six months in jail.

The City Council reviewed a proposal from the City Prosecutor’s Office and expressed unanimous support for paying an estimated $960,000 for prosecuting state misdemeanors. The City Attorney’s office now must approach Gascón with the request to prosecute such cases.

Council members expressed concern over whether Gascón would approve the request, but Bosse said that a denial would foment even more anger in the community.

“This community wants a new prosecutor. They want him not to be the one making these decisions,” she said.

Correction: An earlier version of this story incorrectly identified the organization responsible for serving Gascón with the notice of intent to recall and whose co-chairs called into the City Council hearing. The group is Recall District Attorney George Gascón, not Recall Gascón Now.