William Stepanyan was sentenced to five years behind bars, and Harutyun Chalikyan was handed a 15-month term of imprisonment. Both men were ordered to serve three years of supervised release following prison, and jointly pay restitution of $21,200, according to the U.S. Attorney’s Office.

“These defendants were driven by hate, and their actions were deplorable,” U.S. Attorney Tracy L. Wilkison said in a statement. “The physical injuries and emotional trauma to the victims cannot be understated. We hope that the sentences handed down today will help vindicate those harms.”

Turkey and Armenia have a long history of conflict, part of which has stemmed from Turkey’s support of Azerbaijan in its border conflict with Armenia. When a new war broke out between Armenian and Azeri military forces in September 2020, tensions in Turkish and Armenian communities escalated worldwide, including in the United States. Numerous protests and counter protests, pitting individuals of Armenian and Turkish descent against one another, took place in Los Angeles County.

On Nov. 4, 2020, Stepanyan, 24, who is Armenian-American and lives in Glendale, sent a text message saying that he planned to go “hunting” for Turks. Later that day, Stepanyan met with Chalikyan, 25, of Tujunga, and other Armenian-Americans to protest what they considered to be Turkish aggression against Armenians, express their contempt for Turkey and show their support for Armenia.

Stepanyan, Chalikyan and various unindicted accomplices drove to the restaurant in Beverly Hills, where the defendants stormed inside. Stepanyan and Chalikyan, who were both wearing masks during the attack, flung chairs at the victims while shouting derogatory slurs about Turkish people.

Sam Turac, a nephew of the restaurant owner, recalled in a previous interview with the Courier that “three or four gentlemen entered the store and started breaking stuff.” “The men started throwing chairs at my uncle, who got up and went to the front to protect my aunt. But my aunt realized there were several other men with the group just waiting, so she pulled my uncle back in,” he said.

“They completely trashed the place. They shattered all of our computers. One of the guys picked up my aunt’s phone and put it in his pocket. My uncle went to the E.R. because he had bruises from where the chair hit him,” said Turac.

Four of the five victims were of Turkish descent. At least one of the defendants threatened to kill the victims, shouting: “We came to kill you! We will kill you!” according to the U.S. Department of Justice.

The attack resulted in injuries to multiple victims, including one who lost feeling in the legs and collapsed multiple times due to the injury.

The restaurant reported more than $20,000 in damage and had to close temporarily.

Detectives with the Beverly Hills Police Department were in court during the sentencing hearing.

“This case is another great example of what can be accomplished when law enforcement agencies work unanimously toward a common goal: Community Safety,” said BHPD Public Information Officer Lt. Giovani Trejo in a statement to the Courier. “Our message is clear, if anyone comes to Beverly Hills to victimize our community, this Department will not stop until all available investigative means have been exhausted.”

Trejo did not respond to questions regarding the remaining suspects, who have not been identified by law enforcement. 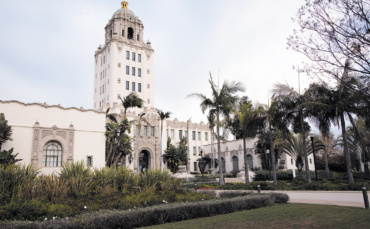 U.S. Private Vaults, a Nevada-based company that operated on West Olympic Boulevard, was raided by the FBI and the U.S. Drug Enforcement Administration in March 2021.