Beverly Hills Welcomes NEXT NIGHT Back With High Turnout

On Oct. 22, over 5,000 community members gathered to celebrate at the fifth annual NEXT NIGHT. Families, City Council members, school board members and more met at a closed South Beverly Drive to enjoy a night filled with good food, great music and wholesome family fun.

On Oct. 22, over 5,000 community members gathered to celebrate at the fifth annual NEXT NIGHT. Families, City Council members, school board members and more met at a closed South Beverly Drive to enjoy a night filled with good food, great music and wholesome family fun.

NEXT NIGHT is sponsored by the Next Beverly Hills Committee, which was formed in 2015 to represent the next generation of Beverly Hills. As part of its work, Next Beverly Hills plans events, holds meetings and other activities to increase community engagement among the youth. This year, the Committee has focused on leadership development, historical appreciation, economic development and charitable engagement.

The festivities at NEXT NIGHT started slowly as the sun set and residents assembled in the middle of the street. By nighttime, the event had grown to a bustling block party. Attendees enjoyed the mouth-watering refreshments available, making a tough choice between mini donuts, Middle Eastern food and New York deli-style sandwiches. While adults went for a stroll in one of the two wine and beer gardens, those under the age of 21 happily engaged with ceramic tile painting, skeeball and contributing to a community drawing.

Former Next Beverly Hills Chair Noelle Freeman said that this year’s NEXT NIGHT was the most ambitious in history. After a two-year hiatus caused by COVID, planners of the event wanted to include representation from the entire city. Information booths from the Beverly Hills Unified School District (BHUSD), Police Department, Public Works Department, Historical Society, JUST IN CASE BH, and American Red Cross were open to answer community members’ questions while also raffling away small prizes. “The idea was not only to have entertainment and a good time for the entire community, but really bring everyone back together after two years of not having this event,” Freeman told the Courier. “The NEXT NIGHT committee did a great job of engaging every facet of the city… It was a beautiful mix of every key player in our community.”

BHUSD Superintendent Michael Bregy was more than open to the invitation and excited to engage with the parents and families of the school district. “This is such a great opportunity for the community to have access to us in an event where they’re here for many different reasons,” Bregy told the Courier. “We love these invitations the city keeps giving us and we will show up every time because we’re proud of our city and proud of the programming that we do at the school district.”

The main attraction at NEXT NIGHT was the event’s performance stage, hosting a variety of top-notch talent throughout the entire night. DJ Keybo warmed up the crowd, playing nothing but top hits and classic favorites. The next act was Rod Lightning & the Thunderbolts of Love performing a handful of upbeat and timeless covers, like “I’m Still Standing” by Elton John. The following act was Kelsie Watts from NBC’s “The Voice.” Watts gave emotional and powerful vocal performances of touching tunes, including one of her latest songs, “I Can’t Say Goodbye.”

The headlining act was the Pop 2000 Tour, which united the boy band powerhouses Lance Bass of *NSYNC, O-Town and LFO all on one stage. O-Town hit the stage first, performing new and old songs from the group’s repertoire, like “We Fit Together” and “Hello World.” Brad Fischetti of LFO joined the group to perform favorites, like “Summer Girls.” Fischetti decorated his microphone stand with two pairs of sneakers in honor of LFO’s two late members, Rich Cronin and Devin Lima.

Finally, Bass walked on stage, welcomed by an ocean of screaming fans and a light drizzle of rain. Bass stood alongside O-Town to sing renditions of legendary songs like “Bye Bye Bye.”

After two years without the block party, the community took full advantage of NEXT NIGHT, partaking in everything the event offered and dancing as freely as possible. “It’s so nice to see friends and neighbors we haven’t actually connected with or seen in so long,” said Beverly Hills resident Libby Pour. “Community events like these are where we have that chance to connect.” 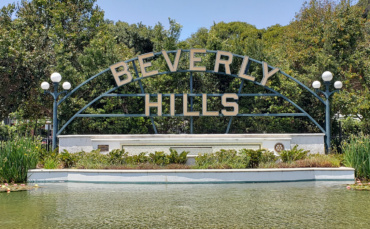 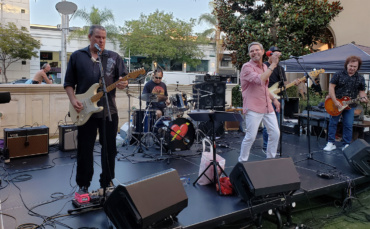 After a two-year COVID-related hiatus, the NEXT NIGHT Street Festival is returning to South Beverly Drive in Beverly Hills on Oct. 22, from 4 to 9 p.m. The free evening will feature live music, food, art, games, and attractions, as well as a beer and wine garden.