Human Rights, Antisemitism at the Forefront of City Council Meeting

The Beverly Hills City Council addressed topics ranging from licensing to commission appointments at its Dec. 6 formal meeting. But two items not on the agenda provided the evening’s most stirring moments.

The Beverly Hills City Council addressed topics ranging from licensing to commission appointments at its Dec. 6 formal meeting. But two items not on the agenda provided the evening’s most stirring moments. Namely, Councilmember Sharona Nazarian’s update on the humanitarian crisis in Iran and Mayor Lili Bosse’s recap of her historic trip to the Mayors Summit Against Antisemitism in Athens.

“Today marks Day 81 of the uprise in Iran that has become an all-out revolution and demand for regime change, since the brutal murder of Mahsa Amini by the morality police,” Nazarian said. She noted that Iran was in the midst of a three-day, countrywide strike in protest.

“There were incorrect reports on several major media outlets that the morality police have been abolished. Let me be clear: This is fake news and weak attempts by the Islamic Republic to use propaganda to mask the truth about the brutal and barbaric acts that are happening in Iran today.

She continued, “On December 14, the United Nations will hold an investigation to remove the Islamic Republic of Iran from the U.N.’s General Women’s Commission. I hope that with statements like these, we will continue to bring transparency, clarity, and unity toward peace, freedom, justice, and democracy.”

Bosse spoke next, on an equally important topic. As reported in the Nov. 25 and Dec. 2 issues of the Courier, Bosse traveled to Athens, Greece last week for the 2022 Mayors Summit Against Antisemitism. There, she joined New York Mayor Eric Adams and other global dignitaries in signing a joint declaration to fight antisemitism.

Bosse told the Courier before she departed there was nothing that could have kept her away. “I think I spent more time on the airplane than I did at the conference, but I have to tell you it was probably among the most worthwhile hours that I have spent in my life,” Bosse said at the City Council meeting.

She noted that it was particularly powerful to stand alongside leaders from Eastern European cities that bear scars of the Holocaust.

“As we’re well aware, antisemitism is the oldest form of hatred and we have seen it here in our own city,” Bosse said, adding that she learned at the conference that the current rise of antisemitism is considered a state of emergency and explaining that social media has contributed to the highest-recorded levels of hate to-date. She said that Beverly Hills has already implemented ideas and safety protocol measures supported by the summit, and that other city leaders were impressed with the proactive leadership of Beverly Hills.

She also noted that the summit discussed the importance of adopting the IHRA (International Holocaust Remembrance Alliance) definition, providing a guide for statements or actions that qualify as antisemitism, which she acknowledged the City of Beverly Hills has done, as well as the need for interfaith diversity and education, which she said the city has also made a priority.

“They talked about security, and so, of course, I talked about our security and the mayors were very impressed by our Real Time Watch Center, our drones, and the BHPDAlert that we have, so I can assure you that our chief is going to be having some visitors.”

Bosse relayed an idea proposed by the summit, and that is for all the cities to implement Jewish American Heritage Month in May, both as a proclamation and as a cultural celebration.

The Council then moved on to the other matters at hand.

According to a City Council staff report, Glossier has been using the likeness of the Beverly Hills shield on marketing imagery since December 2021, before seeking approval. Glossier, located at 8523 Melrose Avenue, is adjacent to the West Hollywood location of Alfred Coffee Shop, which has branded itself as “Alfred at Glossier Alley.”

In the terms of the license agreement with Glossier, the City Council approved the use of the likeness of the Beverly Hills Shield by Glossier for $20,000, paid annually, for a term of five years, from Dec. 1, 2021, to Dec. 31, 2026. Glossier will also pay a one-time settlement agreement fee of $1,666.67 for prior unapproved use of city branding.

The shield will be used on coffee cups, coffee sleeves, pastry bags, napkins, drink carriers, handle bags, and staff aprons, and limited solely to the “Alfred At Glossier Alley” location and social media.

In the licensing agreement with Skechers, the Council approved the use of the Beverly Hills Shield on a collection of Skechers merchandise. In exchange, the city will be paid a one-time, non-refundable advance payment of $25,000, recoupable against royalties.

The Council also approved an allotment of just over $8,000 in federal grant funds for bullet-proof vests for BHPD and $70,000 in state traffic department funds for police overtime, training, travel, and supplies. And Pam Kraushaar was appointed to the Human Relations Commission for an initial, two-year term, to fill the position of the late Chair Rhoda J. Sharp.

The Council also took up the issue of Spring Place. The private club and co-working hub has had issues with noise and safety violations and is on its fifth management team in so many years. Council approved the club’s request for more time to address operational issues. Bosse commended Spring Place attorney Mark Egerman for his attempts to reach out and work “hand-in-hand” with the Planning Commission. 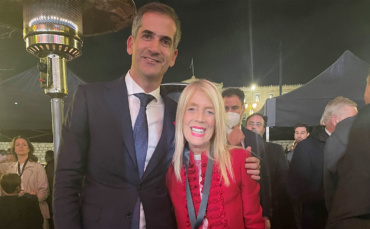 The event is co-hosted by the Combat Antisemitism Movement and the Center for Jewish Impact in partnership with the Jewish Federations of North America.