The 92nd Oscars Governors Ball has heard the recent requests from the entertainment industry and will be 70 percent plant based this year. As for the “Joaquin Phoenix effect,” this is nothing new for Puck who has always considered his plant-based clientele. “I think you have to let people make up their own minds. I believe in being a vegan and vegetarian as long a you can make delicious food.”

Actually, since 2013, the Governors Ball has been dedicated to sustainable farming with more than 50 percent plant-based and vegetarian dishes offered, long before Phoenix launched his campaign that started with the Golden Globe awards serving an entirely plant-based menu for the ceremonial dinner at the Beverly Hilton in January.

Right now, the chef is excited about mushrooms and the new veggie-based Bolognese pasta dish that will be featured on the post-Oscar menu. Leonardo DiCaprio loves the vegan pizza but they are still serving the famous smoked salmon version topped with caviar, wagyu beef and the iconic chocolate Oscars dusted in gold.

“They know we make the best chicken pot pie and the best Miyazaki Wagyu beef but when they try our eggplant, vegan pasta with truffles, vegetarian cous-cous or the homemade tofu with roasted vegetables and chimichurri, they will say, ‘I didn’t know vegetables could taste so amazing,’” said Puck. “They will say, ‘If that is what vegan is, I want to be vegan!”

Even with all the new options, some things must remain on the menu. “Just like in our restaurant at Spago, if I take off the Weinerschnitzel, I have a revolution and they picket the restaurant.” Puck told the Courier. “I have had to keep it on for the past 20 years, and I like change! Same thing at the Oscars, a lot of the dishes we do are comfort food like the macaroni and cheese or the fried chicken with waffle and honey or the beef but you don’t need pounds of it, you eat 3-4 ounces and you’re fine.”

The chef starts cooking Sunday morning but some things are prepared well in advance such as the crowd-favorite chicken pot pie which is cooked the night before and finished off just before the dinner.

In addition to Wolfgang Puck catering cuisine and Sequoia Productions glamorous decor, Coppola wines and Piper Heidsieck Champagne will also be flowing along with creative tequila cocktails by Don Julio. The mini-bottles with a small metal golden straw might just be the cutest way to serve a drink since the mini-champagne bottles launched. The famous guests will also have the option of a neat pour with mole, salt, smoke and chocolate in a flute. “Tequila is so universal it goes with anything,” lead mixologist Charles Joly told The Courier. “We want to appeal to as many people as possible. We don’t want to be too precious or too fancy but approachable. Something that celebrates the night but I don’t want anyone waiting for more than a few seconds for a drink at my bar.”

The Governors Ball kitchen staff will go through 35 pounds of winter black truffles from Burgundy, alone, which will be shaved on over 400 signature pizzas and pasta dishes like the mac-n-cheese plus the legendary chicken pot pie. “We really want to make our customers happy,” says Puck. At the Hotel Bel Air we make the chicken pot pie because it was so popular at the Oscars. People who stayed in the hotel asked for it, it’s the perfect combination of comfort food with a little luxury and everyone loves it.”

There is such an interest in how this dinner comes about and what it takes to pull off an event for 1,500 people on Hollywood’s biggest night, that not one but two documentaries are in the works, one with HBO and the other with Disney, about a day-in-the-life of Puck and his catering company.

“It will be about all our events,” Puck told the Courier. “We shot at the SAG Awards and a big event at the Rose Bowl for a financial company. It’s going to be exciting to see how we put the whole event together from planning and putting up tents, to planning the menu, organizing all of the different people. Everyone will see what it takes to put on a great party.”

And even one of the world’s greatest chefs will admit that it’s not so easy. “You try at home to cook for five people and make five dishes. If you don’t write it all down [and plan] you are going to say, ‘I don’t have enough casseroles or enough space.’ It’s the same thing with us. We have to transport dinner for 750 people, from 10 different hors d’oeuvre from beef, fish, pasta, and vegetarian dishes, 12-15 different main courses and we have to do it on the infield at the Rose Bowl so we have to set up the kitchens with ovens. The HBO [show] is going to be a lot of fun and I’m excited. People will say, ‘wow, I didn’t know that.’”

Puck is also not resting on his past Spago or Oscar party glory anytime soon. He is about to open seven restaurant concepts at The Pendry on Sunset. “The top restaurant will be a luxury restaurant with interesting food but upscale and downstairs there will be a street café,” confirmed Puck. “It’s going to have food to go but you can also sip a glass of wine. And, we are going to have different pizzas than we have now. It’s going to be a lot of fun for us because I love to create new projects. It really helps us to reinvent ourselves all the time and not to get too complacent. And, it’s good for the next generation like my son.”

The Next Generation of Spago

While Wolfgang Puck and his VP of Culinary at WP Catering, Eric Klein wowed the crowd once again at the Governors Ball preview, there was a new member of the crew front and center this year. Puck’s 25-year-old son Byron who is poised to take over the reins of the Puck empire from his famous father one day.

BHC: How does it feel to take over the family food dynasty day by day?

Byron Puck: It’s honestly a lot of fun. I have a lot of free reign, thankfully and a great teacher who is always there for me. I’m super excited for the future. I like being able to flip between working in the kitchen as a chef but also going out into the dining room – as he does – and feel that hospitality-centric side of the restaurant. The food industry is so much fun for me and I take constant pages out of my Father’s book to try and keep up the legacy. I’ve got some pretty big shoes to fill. Thankfully he only wears a size nine. 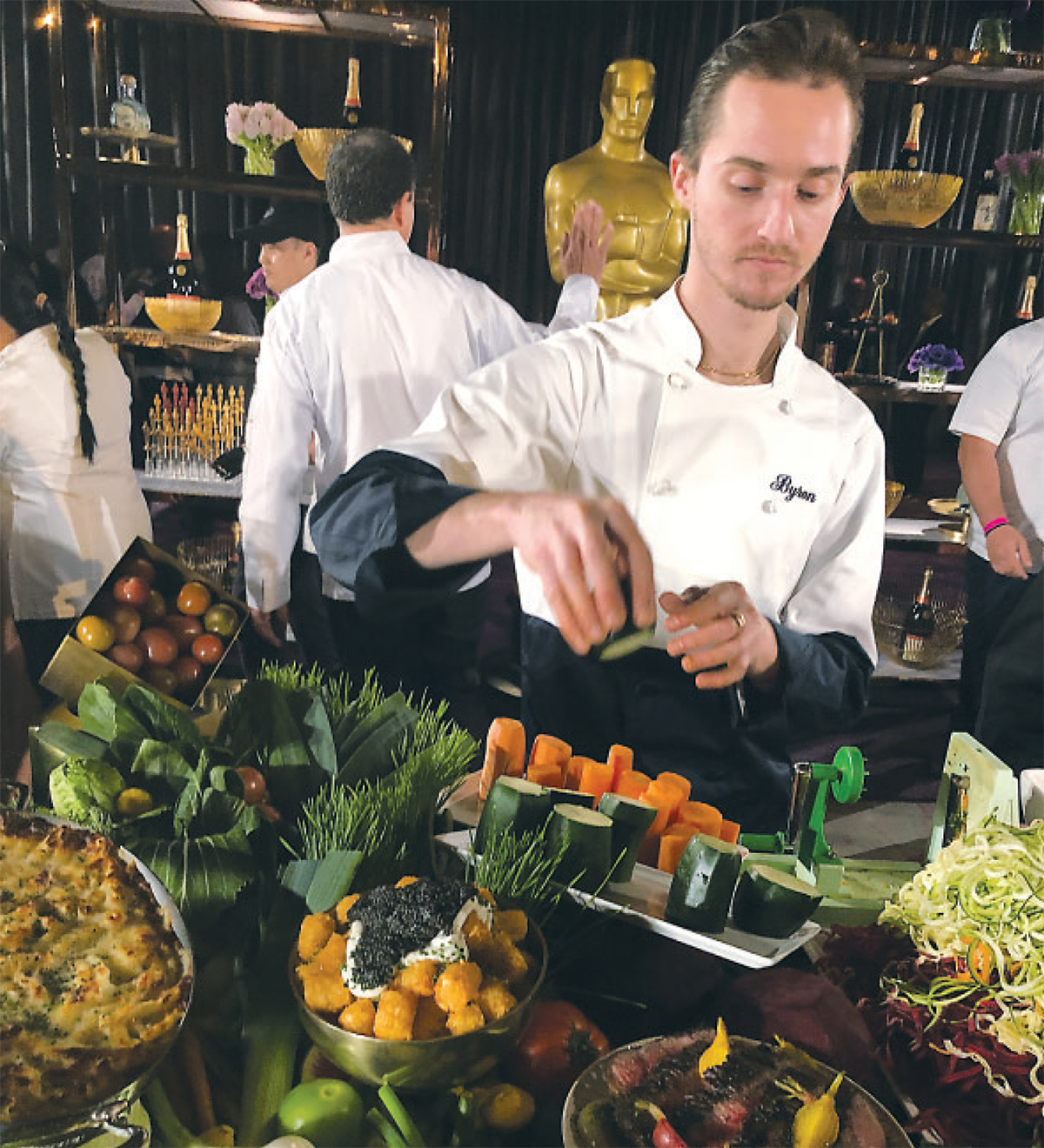 It seems no matter where you dine, your father is there. Will you be able to show up at all the Beverly Hills restaurants each night to greet the guests in the same way?

That’s speaking to that hospitality side when Spago first started. There was Orson Wells and Billy Wilder and they became great friends but everyone is treated exactly the same – whether you are a celebrity or not. I think that is what allows this company to persist. We care first about the people. Obviously, the food is probably the most important part of what we do but at the end of the day it’s making people feel happy and comfortable like they are at home when they are coming into the restaurants. I think that is something we need to maintain as younger generations such as myself come into the business. We have an amazing teacher that shows us how important that is; going to every single restaurant almost every single day.

What is your favorite restaurant to cook in and why?

Oh, that is a great question. Probably Spago because it feels like home to me. I grew up with my Father working there all the time so I’d go and see him since I was three years old until now. So, walking in there truly feels like my second home. We have amazing loyalty so all of the chefs who work there have seen me grow up. Some of them have been there for 20 or 30 years. It’s amazing and I feel comfortable there. It was open 38 years this past Jan. 16th and we’re going to keep it going. It’s not stopping anytime soon.

What’s the best part about working with your Dad?

Honestly, it’s getting these notes from him and being able to learn day in and day out. There is something to learn every single day just from watching him. He’s incredibly personable and an amazing chef. I’m trying to pick up on all of it.

What’s the most challenging part for you?

He likes to show up late. I’m a little bit more punctual but I would not be having fun unless I had a little bit of anxiety going on. So, he’s showing up right before the event is starting and it’s always a hilarious process. He’s so good at it and he’s been doing it for 40-50 years at this point so he can show up and be ready to go with no preparation.

What’s your favorite thing to make on the new Vegan menu and the old one?

The A5 Wagyu from a farm in Japan that has been voted for best beef. All the cows are humanely treated and it’s truly the best I’ve ever had. The vegan mushroom Bolognese – you can’t tell that you’re not eating meat. It’s beautiful with earthy, spicy flavors.

What celebrity were you most happy to meet while working at the Oscars?

Everyone says it but meeting and speaking with Meryl Streep. I’ve never met a more polite person and she is truly lovely and a pleasure talk to. Also, Steven Spielberg. I was just out of college and asking what his next venture was, and he paused me to ask what I was doing, where I going and what my passions were in life. I’ve never been more humbled. 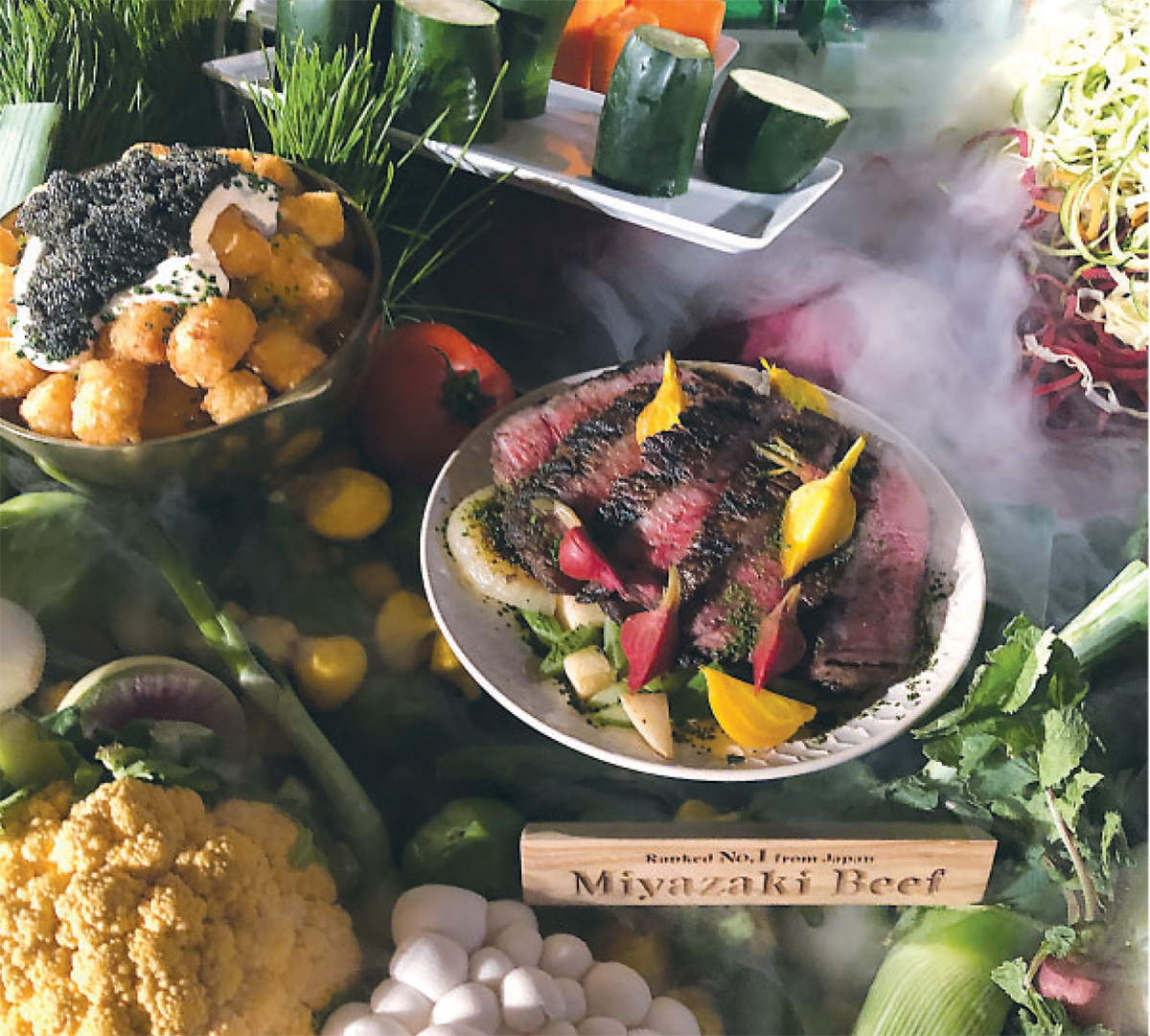