Maximizing cost-savings opportunities is primary for the Council right now, particularly given that its new operating budget represents a decrease of $30.3 million from the previous fiscal year.

Just one week after the City Council adopted a $418.8M Operating Budget for the current fiscal year, on July 7 the Audit and Finance Committee liaisons met to consider the proposed audit work plan for the coming year.

“Given that we are in a prolonged state of emergency, the City will likely have reduced revenues for the next 18 to 24 months, which will impact continued levels of service,” City Auditor Eduardo Luna wrote in his staff report. “In this environment, the City Auditor should be more forward looking, as opposed to auditing programs that operated in previous fiscal years.”

In making his presentation on Tuesday to the liaison, which including Mayor Lester Friedman and Vice Mayor Bob Wunderlich, Luna proposed undertaking two to three audits for the coming fiscal year. Due to the COVID-19 pandemic, Luna said his office had only been able to complete four of eight performance audits as identified in July 2019.

According to Luna, his office has 4,400 available audit hours to conduct performance audits, monitor outside audit engagements and oversee the Trust & Innovation Portal for Fiscal Year 2020/21, all of which will be done in-house given the current budget situation. He recommended undertaking performance audits which could center around allegations of potential fraud, waste and abuse in City operations, in addition to researching suggestions for improving City government.

Wunderlich proposed that Luna’s office focus on zero-based budget reviews to identify cost-cutting opportunities given that that pandemic has forced the City to rethink operations. Secondary to that, he suggested taking a look at the higher ticket budget items, including the City’s use of contractors. “Are we getting the right amount of output for the right amount of dollars that we’re spending?” he posited.

The third avenue Wunderlich suggested the City explore centered around the “non-dollar amount” of operating budget success in meeting objectives, such as enforcement in a number of different arenas.

Maximizing cost-savings opportunities is primary for the Council right now, particularly given that its new operating budget represents a decrease of $30.3 million from the previous fiscal year.

“I’m concerned that we’re going to be asking the Police Department to come up with some savings for the budget, and it doesn’t look like it’s going to be coming by way of personnel and time spent on the job,” Friedman said in asking Chavez if it would be possible to delay cuts to the department related to its stock of vehicles. “I just don’t know where we’re going to get that.”

Chavez said the real savings opportunities would come in terms of how the City structures the department, including eliminating certain positions. Throughout the City, he estimated that between 35 to 40 employees would participate in the early retirement incentive program. In total, the City employs approximately 1,000 people, including both full time and part time.

“We’re going to be facing a significant amount of employee reductions right now with the voluntary separation program,” Chavez said. “The question becomes, are we going to restructure the organization to continue to deliver services? Looking at audits for things that we have done traditionally in the past, I don’t know if that’s the best use of Eduardo’s team’s time at the moment. The question becomes, once we get settled in, are we doing it right?”

While no one knows just how long the pandemic will last and how long Beverly Hills’ “virtual City Hall” will continue to operate, Luna said that now is the time to consider best practices.

Chavez said that completing last year’s audits, including the real estate audit, would also be helpful in further realizing savings.

“I think the opportunity that we have is that we’re in this phase right now where there are some efficiencies that we may have been able to discover that are a result of us telecommuting in this pandemic era,” Mayor Friedman said. “How do we carry those over in a post-pandemic era?” 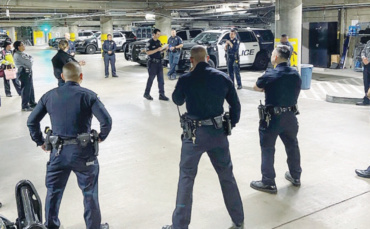