“I want the freedom to accept or reject vaccination for myself and my minor children,” said the handout. “The state or federal government cannot force me or my minor children to be vaccinated without my express permission.”

Hundreds of supporters of President Donald Trump marched into Beverly Hills on Aug. 8 for a rally organized by the #WalkAway campaign, a group that encourages Democrats and unaffiliated liberals to defect to the Republican Party. The rally, titled “Rescue America,” gathered in front of the lily pond in Beverly Gardens Park to hear speakers from the conservative online media world condemn the national wave of civil rights protests and call for a second term for the President.

“Beverly Hills seemed like an ideal backdrop because of its beauty and the demographic it represents,” #WalkAway founder Brandon Straka, who organized the rally on Saturday, told the Courier. “Many Beverly Hills residents have fallen under the spell of leftist philosophy simply because of the constant reinforcement of these narratives in this entertainment industry and media-driven town.”

In fact, two precincts in Beverly Hills cast a majority of votes for Trump in 2016, according to data compiled by the Los Angeles Times.

Straka came to prominence as a conservative personality in 2018 when Right-Wing news outlets picked up a YouTube video he filmed in which the gay, New York City hairstylist renounced Liberalism and the Democratic Party. He capitalized on the virality of the video and went on to appear across conservative media, giving interviews to Laura Ingraham, Tucker Carlson, and Alex Jones, the conspiracy theorist who has called the Sandy Hook Elementary School shooting a hoax.

Jones donated $10,000 to a GoFundMe set up to support Straka and his nascent campaign.

Straka says that he also chose Beverly Hills as the location for the rally because of the recent protests against police brutality held in the City.

“As I watched the radical left doing so much destruction to our country, I had this vision in my head,” Straka told the crowd on Saturday after they had marched from West Hollywood to Beverly Gardens Park. He compared America to a “damsel in distress” tied to a railroad track from a black and white film. “I feel like America is a country in distress, America is a country in peril, America is like that damsel tied to the railroad tracks with the radical left charging at her like a freight train. But America needs heroes right now, like you, and me, and everybody here.”

A near-ceaseless din of car horns blared out along Santa Monica Boulevard in support of the rally, with occasional obscenities joining the cacophony. While Beverly Hills saw another, smaller pro-Trump rally a few weeks ago at the same location, that one was unaffiliated with #WalkAway.

The Courier observed more than a third of attendees not wearing face coverings, which are required by Beverly Hills. According to Beverly Hills Police Department Public Information Officer Lt. Max Subin, law enforcement did not issue any citations for non-compliance. “There were no reportable incidents from yesterday’s protest,” he said.

As the rally wound down toward the late afternoon, the Courier observed unmasked rally-goers filter into the Golden Triangle.

Straka told the Courier that he was unconcerned about the lack of precautions. “I believe in letting every person make the decision that they deem to be best for themselves in regards to their health and the choices they want to make when researching the most up to date facts and science regarding this widely controversial virus,” he said. “In the end, we are all responsible for protecting ourselves.”

Although public health agencies made conflicting statements about the efficacy of face coverings at the outset of the pandemic, epidemiologists have since emphasized their importance in slowing the spread of COVID-19. With more data, experts have a better idea of how the virus spreads and how to prevent it. A model published by the Institute of Health Metrics and Evaluation on June 24 suggested that more than 33,000 deaths could be avoided by Oct. 1 if 95 percent of the population wore masks in public.

That same model forecasted nearly 180,000 deaths by Oct. 1 in the United States at its current trajectory.

As if to emphasize the risks of gatherings like the rally on Saturday, one woman handing out anti-vaccination materials described feeling sick just two weeks earlier. “I’m still even sore now, in my body, because of that sickness,” said Lie Neyda, who was not wearing a mask.

Neyda was passing out flyers that called on voters to reject mandatory vaccinations, which has not been proposed by any government agency to date.

“I want the freedom to accept or reject vaccination for myself and my minor children,” said the handout. “The state or federal government cannot force me or my minor children to be vaccinated without my express permission.”

Another woman passed out cards with the text “Beware the Needle” that repeated misinformation about the side effects of vaccines.

The event sought to straddle a message that both appealed to disenchanted Democrats while also emphasizing a more traditional, Evangelical conservative world-view. Speakers repeatedly hit on religious and moral themes, describing America as a “Judeo-Christian nation”

Another actor, Lorenzo Lamas, warned of a similarly anti-religious threat to the country. “America and her ideals have never been more threatened by atheists and socialists ever, in our history,” he said. “Marxism and fascism have been permeating our children’s education for decades.”

Straka sought to distance the rally and the organization from its overtly pro-Trump sentiment. “#WalkAway is NOT a pro-Trump movement or a pro-Republican movement,” he wrote in an email. “We are an anti-leftist movement.”

Toward the end of the rally, a representative of the Walk Away Foundation took the stage to read a disclaimer from his phone. “The Walk Away Foundation, which is a 501(c)3, does not support or endorse any direct candidate, organization, cause, or business that is in attendance and/or speaking at today’s rally,” he said.

To maintain its tax-exempt status as a nonprofit organization, the Walk Away Foundation is barred from “directly or indirectly participating in, or intervening in, any political campaign on behalf of (or in opposition to) any candidate for elective public office,” according to the IRS’s website. The Foundation indicated in filings to the IRS in 2018, the most recent year for which documents were available, that it had not engaged in political campaign activities.

Yet, at the rally itself, speakers repeatedly called for Trump’s reelection and shared anecdotes of former-Democrats planning to vote for Trump in 2020, venders sold Trump re-election merchandise, and large Trump 2020 flags flew over the crowd.

“If we don’t reelect President Trump, every single thing that we hold dear will be gone,” Baio warned. “God, law, Christmas, the flag, the national anthem, anything you can think of. And it will be gone before you can blink.”

Straka says #WalkAway will “most certainly” return to Beverly Hills. “But for the time being our focus is traveling the country between now and Election Day.” 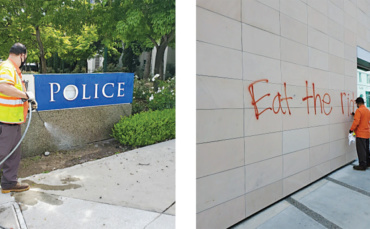 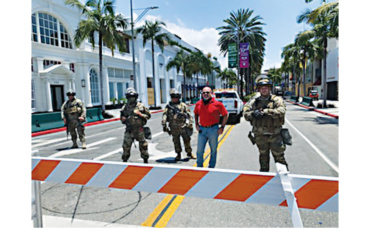