On Aug. 12, roughly 200 personal care professionals gathered outside the Federal Building in Westwood to peacefully protest the continued closure of all businesses providing cosmetology services. Over 600,000 licensed beauticians in the state remain unable to work. Holding signs that read “Our salons are safer inside” and “Let us work,” the crowd chanted “Open salons now!” The protest was organized by Eric Taylor, the owner of Salon Republic, a hair salon with locations in Beverly Hills, Hollywood and West Hollywood.

“The biggest point is that whether salons are open or not has nothing to do with the COVID numbers,” Taylor told the Courier. “If you look at other states like Texas and Florida, they never closed a second time around. Their numbers have been going down faster than ours. I think it’s problematic that Governor Newsom bundled salons with gyms, bars and restaurants. Our protocols were very well thought out, and the CDC endorsed them as being effective. Governor Newsom is the only governor in the United States who doesn’t seem to believe that.”

Beauticians argue that California legislators are treating workers in this field unfairly, leaving them financially vulnerable. Licensed professionals in the industry argue that salons are not high-risk workplaces. Citing the state mandated minimum 1,600 hours of training and education, workers feel that salons should be allowed to reopen under the same protocols outlined in the June 19 health order, including symptom checks; maintaining a distance of six feet; not more than 50 percent indoor occupancy; mandatory face coverings; sanitizing per the California Board of Barbering and Cosmetology guidelines and more.

“How is it clean for a manicurist to sit on a piece of cardboard on pavement giving someone a pedicure or cut hair in an alleyway?” Joyce Marie, owner of facial spa Joyce Marie of Beverly Hills told the Courier. “That goes against everything that we’ve been taught. I’ve been doing this for 42 years, and the most important thing we learn is how to perform our duties safely. Especially as an aesthetician we deal with HIV, hepatitis C, I mean, this is not the first disease to come along. We consider ourselves almost like healthcare workers.” 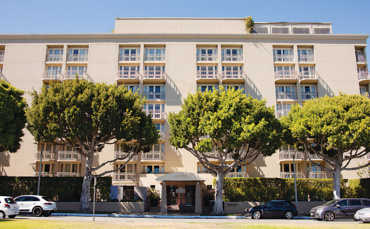