Over the last two weeks, the Beverly Hills Police Department (BHPD) has arrested 44 individuals within the City in connection with Employment Development Department (EDD) fraud and identity theft. The arrests yielded a total of 129 fraudulent EDD debit cards with a value of over $2.5 million, more than $289,000 in U.S. currency and seven handguns found on the suspects’ persons or in their vehicles.

The Courier first broke the story that EDD fraud is impacting the City in its Sept. 11 issue.

Subsequently, BHPD released a statement on Sept. 16 providing additional details about the investigations. “Earlier this month, the Beverly Hills Police Department learned criminals were fraudulently obtaining EDD benefits loaded onto EDD debit cards using stolen identities. The monetary value placed on the cards by EDD can be as high as $20,000. Cardholders are able to withdraw up to $1,000 per day, per card. Suspects have traveled primarily from out of state to obtain these fraudulent EDD cards in California. The suspects will most often have numerous EDD cards in their possession with other people’s identities, along with large amounts of cash. They will then use the cards to lease short-term rentals, rent luxury vehicles, dine at restaurants and purchase high-end merchandise,” said the statement.

In California, the EDD allows individuals eligible for Unemployment Insurance, Disability Insurance and Paid Family Leave to receive payments in the form of a Bank of America debit card. The card can be used to make purchases and withdraw cash. The EDD also offers Digital Cards—a prepaid Visa debit card—similar to the physical card option. Both forms of EDD cards are being targeted by individuals in Beverly Hills and throughout the county and state.

According to the U.S. Department of Labor, the EDD has paid out more than $81.8 billion in unemployment benefits since March. A Sep. 10 report released by the Department shows a startling sudden influx in initial unemployment claims from recent weeks.

In mid-August, Los Angeles City Attorney Mike Feuer issued a warning, alerting the public of thieves using stolen Social Security numbers to apply for and receive unemployment relief—in the form of EDD cards—in their unknowing victims’ names. “All this is adding extra strain to our state’s over-burdened unemployment network at a time when record numbers of Californians desperately need benefits,” Feuer noted.

On Sep. 14, BHPD officers arrested a Kentucky man after confiscating two handguns and over $30,000 in cash found on his person. The arrest, which the BHPD confirmed also involves EDD fraud, took place outside of Cartier, a boutique specializing in fine jewelry and luxury timepieces. The Courier obtained an exclusive video from the scene that captured the suspect repeating, “I’m not from here,” while officers seized cash and other contraband.

On the same day, the BHPD released a community alert describing the trend as: “Suspects posing as customers may possess fraudulent EDD cards that are not in their name; High dollar amounts are preloaded on the cards; Purchase of high dollar items with the fraudulent cards or large amounts of cash.”

Working with businesses to mitigate further escalation, the BHPD urged retailers to require all customers to present a valid form of government ID, ensuring the name on the credit card matches. Businesses were also advised to limit one EDD card per customer as payment and require a physical card as opposed to a digital wallet.

The Courier has learned that the parent corporations of prominent retailers in the City are urging an immediate, indefinite hold on accepting EDD cards as a form of payment.

On Sep. 16, luxury retailers such as Van Cleef & Arpels, Cartier, Vacheron Constantin and Piaget began informing customers prior to entering that EDD cards would no longer be accepted. Most businesses in the Triangle have since followed suit—including restaurants.

“There are millions of tax dollars being spent fraudulently as a result of this trend,” Police Chief Dominick Rivetti said in the Sep. 16 release. “The Beverly Hills Police Department is also working closely with our business community to keep them well informed of this trend in an effort to mitigate these crimes within our City.”

The BHPD is encouraging the public to call the Department at 310-285-2125 or submit an anonymous tip by texting BEVHILLSPD followed by the tip information to 888777. 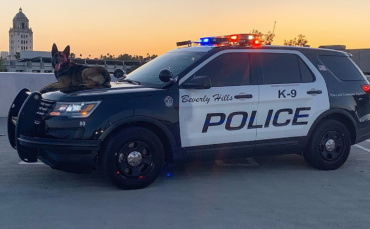