The Los Angeles County Metropolitan Transportation Authority (Metro) Board of Directors took a step closer to realizing the long-discussed Sepulveda Transit Corridor Project, a two-phase plan to connect the San Fernando Valley, the Westside, and Los Angeles International Airport (LAX). The first phase will link the Valley and the Westside, with later plans to extend the line to LAX. On Feb. 25, the Board received and filed recommendations from Metro staff to explore two private proposals, including a monorail line running along the center of the 405 freeway and a heavy rail line running beneath Sepulveda before emerging above-ground in the Valley.

The venture’s genesis dates back to Measure M, the 2016 one-cent sales tax increase that provides funding for transportation infrastructure in the county. The use of private input this early in the process is a new strategy for the transit agency—one that it hopes will reduce costs for what promises to be one of the most expensive undertakings in its history. The public will have until March 25 to give feedback on the proposals before the Board of Directors votes on whether to enter into Pre-Development Agreements (PDA) with the contractors. Following that vote, Metro will begin the environmental review process while PDA teams simultaneously refine their plans—a process that Metro says incorporates ample opportunity for public response.

Traditionally, Metro does not bring on private sector partners until later in the process. Instead, Metro will spend often years crafting proposals, vetting them through the environmental review process, selecting a preferred option, and then soliciting contracts from private companies to execute it at the lowest cost. Indeed, Metro first began the Sepulveda Transit Corridor Project in this way. But when Metro revealed the estimated cost for four proposals in 2019, ranging between $9.4 billion and $13.8 billion, the sticker shock sent the agency searching for another option. The project’s main source of funding, Measure M, only provides $5.7 billion to connect the Valley and the Westside. 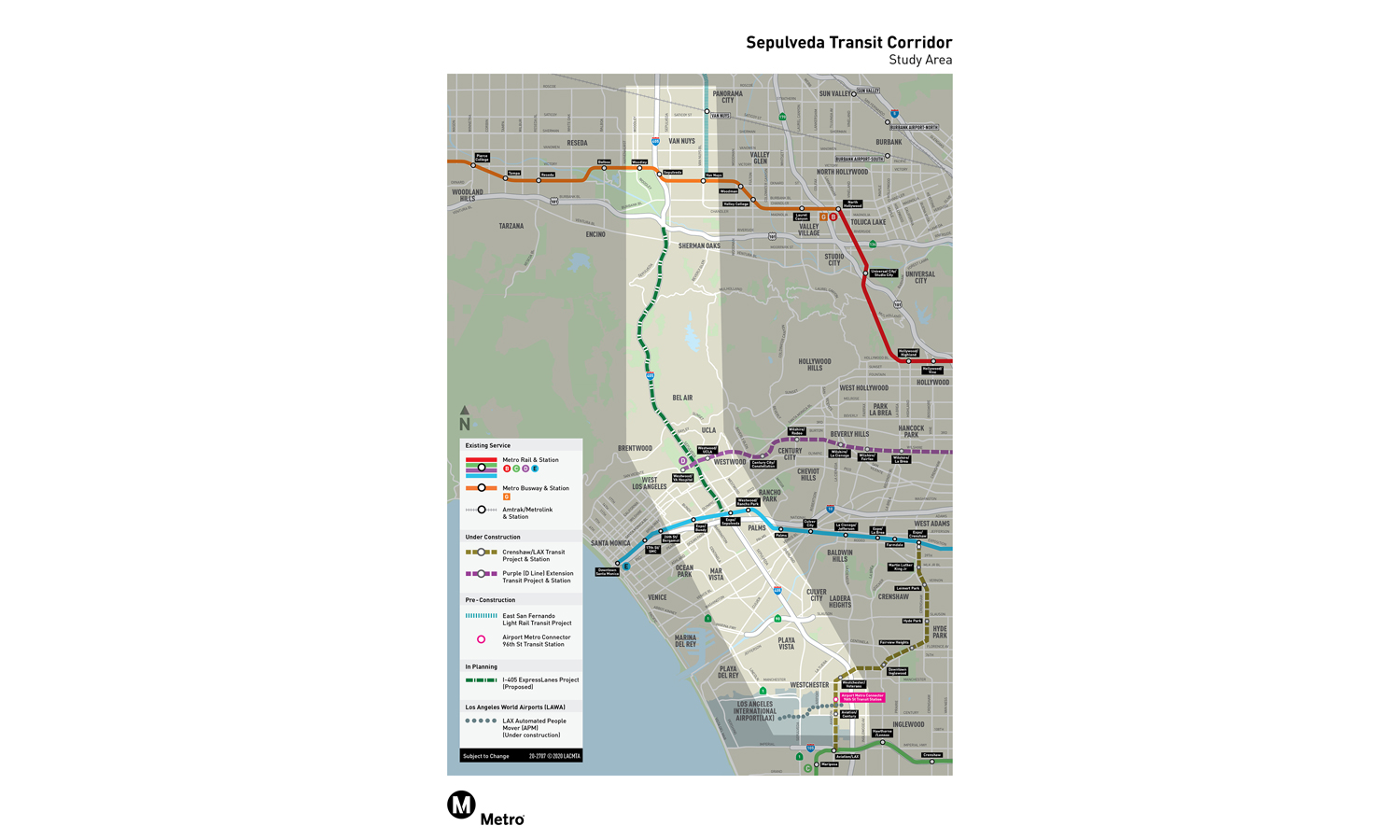 Metro landed on the use of a public-private partnership model known as a Pre-Development Agreement (PDA), which brings in private collaboration much earlier in the process. Under a PDA, Metro works with a contactor before the completion of the study-intensive environmental review process. This gives the contractor the opportunity to provide engineering, construction, and operational input at an earlier junction, hopefully lowering costs in the long run.

Metro received four PDA proposals from contractors by August 2020, which included designs for monorail, light rail, and heavy rail. Metro then assembled a team of experts to evaluate the four proposals, scoring them on a range of criteria such as technical qualifications and financial feasibility. On Feb. 25, staff presented the two highest scoring proposals to the Board: a monorail line proposed by LA Skyrail Express and a heavy rail line by Sepulveda Transit Corridor Partners – Bechtel.

“This is a really exciting process that we’re about to undertake,” said Chief Innovation Officer Joshua Schank. “It’s like nothing that’s been done before in this industry. The use of a Pre-Development Agreement alone is unusual, but the fact that we’re using two different teams and enabling the kind of innovation and competition and excitement that comes with that type of arrangement has never been done before.”

It is unclear how Metro’s earlier concepts fit into the agency’s plans going forward. When asked about whether Metro would continue to pursue any of its own concepts, Metro Communications Manager Dave Sotero told the Courier, “During the environmental review process, we will be evaluating PDA concepts and other potential solutions that best meet the mobility needs of the corridor.”

Metro estimates that the PDA and environmental review process will take until 2025. Metro has broken it up into five stages. The end of each stage gives Metro the opportunity, or “off ramp,” to reject a concept. But even after Metro ceases working with a private contractor, they continue to own the rights to the concept at any stage. In this sense, the contractors serve as partners with the agency.

The Board will vote March 25 on whether to enter into PDAs with Skyrail and Bechtel, which would cost $63.6 million and $69.9 million respectively. Until then, Metro says that the public has time to review the proposals. But according to some groups, not enough public material exists to make informed opinions on the proposals.

“Metro has been far from transparent and they have basically made decisions in their own vacuum, letting us know bits and pieces about their intentions and bringing in several PR people to interface with the public,” Bel Air-Beverly Crest Neighborhood Council Traffic/Transportation Committee Chairperson Irene Sandler told the Courier in an email. “It’s hard to make evaluations or to respond to Metro’s choices and plans for this segment with insufficient information!”

Bob Anderson, Sherman Oaks Homeowners Association (SOHA) board member and Transportation Committee Chair, also felt the public had been shortchanged at a critical moment. “Metro has put the public in a bind. They’ve given us a month to make comments. Their decision is March 25, which means you have to get a comment to them by about the 14th of March if you want them to actually pay attention to it,” he told the Courier.

Anderson himself says he had to request the full proposals from Metro and has read through 2,000 pages, but that Metro has not made the information accessible or digestible. “They only provided a few sentences on each concept in their Board Report. They need to provide more summary information to help the public understand the concepts and what’s going to happen.”

In the Feb. 25 meeting, Metro emphasized how the process had only just begun. The public would have ample time to weigh in on the proposals, said Colin Peppard, Senior Director of Metro’s Public-Private Partnerships (P3) Program.

“From the standpoint of the public, there will be probably about two years…of public feedback, technical analysis to really understand the corridor better from a technical standpoint and an engineering standpoint, and, ultimately, evolution and refinements of any of the concepts,” he said.

According to Metro’s current timeline, the line will begin operations by 2033-2035, although Metro lists the project as a candidate for accelerated completion under the “Twenty-Eight by ’28” initiative for the 2028 Olympic Games. The LAX extension is scheduled for a 2057-59 opening date.