How Beverly Hills Worshipped in a Pandemic

“Welcome to everybody here,” Rabbi Aaron began the service, smiling. “And welcome to all of you who are on your couch, making breakfast, going on a hike.”

In a much-anticipated U.S. Supreme Court ruling issued on April 9, the high court struck down California’s restrictions on indoor church services. The mandate had capped attendance at 25 percent in purple and red tier counties, and at 50 percent in orange and purple tier counties. A win for religious liberty, some said; a blow to public health, said others.

But in Beverly Hills, after more than a year of Zoom services, of parking lot praying, of socially distant psalms—of just making it work—places of worship are taking a more cautious approach.

For All Saints Church, that means a single 10 a.m. Sunday service limited to 179 people, or 25 percent of capacity. Even under California’s now-invalid rules, All Saints would be allowed to operate at 50 percent with Los Angeles County in the orange tier.

“I know there are different points of view about this, but our church has taken the tact to keep our people as safe as possible and to follow medical advice,” said Rector Janet Broderick. All Saints, which had its first in-person service since the pandemic on Easter Sunday, will seat attendants physically distant and require masks. Even the members of the reduced choir will wear masks.

“We are only opening because we believe we can open without any harm. Otherwise, we would wait,” Broderick told the Courier.

Like many, Rabbi Johnathan Aaron of Temple Emmanuel marks Before Covid and After Covid by the sudden and sobering cancellation of NCAA basketball. “That’s when we really knew,” he told the Courier. “We pretty much right away went to broadcasting on Facebook Live and YouTube.”

That was more than 100 broadcasts ago. Like All Saints, Temple Emmanuel is also slowly dipping its toe in the water, holding its first in-person services on April 10 in its outdoor courtyard. It also plans on having in-person services for the High Holy Days. In the video stream of its first “hybrid” service, congregants sit scattered in the circular courtyard.

“Welcome to everybody here,” Rabbi Aaron began the service, smiling. “And welcome to all of you who are on your couch, making breakfast, going on a hike.”

After more than a year apart, speaking directly to a webcam, Aaron felt hyper-aware of the impact of proximity. “I don’t think people realize how much human energy is shared in the space,” he recalled. “And we were energized by it. Everyone there had smiles, although everyone wears masks.”

The transition from in-person to virtual came with a bit of a learning curve. “What you experience in live theater doesn’t always translate to what you can experience on a screen,” Broderick said. “It just doesn’t. And so, we cut some things out a bit and expanded on others that people could relate to on a screen.”

Rabbi Aaron, too, had to adjust his performance from the stage to the screen. But, as he notes, “All religion began very theatrically.”

It helps that Rabbi Aaron majored in Theater in college and his “co-star” Cantor Lizzie Weiss was an actor who performed in the national High School Musical tour. A board member who produces TV also offered some professional advice after the very first broadcast. “When you’re doing something like this, you have to speak to one person,” Aaron remembered him saying. “That is a big difference between when you’re with a crowd and when you’re  looking into a camera.”

He describes the hybrid services, only in their very nascent stage, as more akin to a talk show with both a live audience and a television audience.

Broderick also enlisted help from the entertainment world. All Saints brought on award-winning Broadway director Michael Wilson to help translate the experience of church for the screen.

But both Broderick and Aaron discovered a silver lining amid the crisis. Even while they had never been so distant from their members, they had also never been as accessible to them. “I think this is the future of all religions, really, because of the reach online,” Rabbi Aaron said. “We have people that watch our services from Brazil and Oregon and New Jersey and Tennessee and all over the world.”

Over a year later, Broderick has seen some of her parishioners benefit from the new medium. “Sometimes, frankly, people will share something in a Zoom that they would never share in front of a room of 100 people,” she said.

But for Orthodox Jewish synagogues who observe prohibitions on the use of electricity on Shabbat, the experience of the last year has been especially isolating. Young Israel of North Beverly Hills (YINBH) Synagogue, a Modern-Orthodox Zionist congregation, held Zoom services over the week, but could not gather on Shabbat—even remotely.

“Closing the synagogue was a major thing, because the main service for us is on Shabbat,” Rabbi Pini Dunner told the Courier. “We could do daily services, but we couldn’t do anything on Shabbat.”

For the first few months, Dunner was at a loss for what to do. But as restrictions began to relax for the first time in the summer, YINBH took its first tentative steps toward coming back together in a limited capacity. A small number of members met indoors for weekday services. For the much busier weekend service, the congregation met outside on a member’s tennis court. For the high holy days of Rosh Hashanah and Yom Kippur, a nearby Mercedes Benz dealership offered the use of their extensive parking lot to set up tents.

“It was an absolute blessing,” Dunner said. “Even if you don’t attend synagogue, just to know that it continues to meet on a daily basis, and that the community life continues to function, even in your absence—it’s psychologically reassuring, isn’t it?”

A year of communal restrictions has impressed on Dunner the importance of community. “It’s a struggle to keep people connected at a time when we’re all so apart,” he said. “Even misanthropic human beings need human contact.”

Even though the court’s recent decision permits the synagogue to reopen, YINBH plans waiting to fully reopen by July. “We want to make sure that those people who attend are comfortable coming,” he said.

But as the flock returns to the fold, spiritual leaders are prepared to address the sometimes-bitter questions raised by this time. “Existentially, honestly, the difference between the way the world is and the way the world ought to be became deeply clear,” said Broderick. 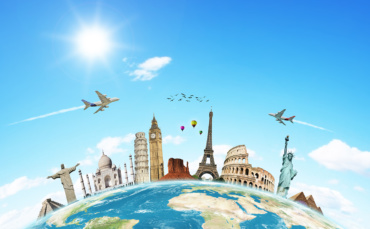 Even if Fully Vaccinated, Public Health Urges Caution While Traveling

“It is imperative that L.A. County residents continue to take steps necessary to curb the spread of COVID-19 and contain new sources of infection until we can achieve higher levels of vaccination in California and globally,” said an April 7 statement from the Los Angeles County Department of Public Health (Public Health).