“This is an opportunity for us as a community to show how getting on a bicycle and using other modes of transportation is encouraged,” Councilmember Lester Friedman said, while suggesting sponsorships at the western Beverly Boulevard terminus.

It’s tough to imagine Santa Monica Boulevard without a single car, but at some point in 2022 it may be filled with booths and bikes instead. At the Aug. 3 Study Session, Transportation Planner Jessie Holzer presented council members with a first look at the CicLAvia Open Streets event, a potential partnership with West Hollywood and Los Angeles to extend car-free streets all the way from East Hollywood to the intersection of Santa Monica Boulevard and Beverly Drive for an entire Sunday in either April, May or August of next year.

Despite various concerns about parking, cost, and traffic controls, council members were enthusiastically on board.

CicLAvia is a nonprofit that draws its name from the Spanish word “ciclovía,” meaning “cycleway.” Since 2010, it has closed down over 226 miles of streets all over LA County to over 1.8 million people and opened them up to bikes and pedestrians. Beverly Hills asked CicLAvia for help hosting its own open streets event, since the focus on vibrant public spaces, sustainable transportation, and healthy living coincide neatly with the city’s Complete Streets Plan.

The organization told Beverly Hills that it cannot host any new events in the near future but encouraged the city to partner with its neighbors to the east. If approved, the three cities would each pay an estimated $200,000 to $400,000 for a one-day event and apply jointly for Metro grants of up to $500,000. Much of the Metro grant would go towards CicLAvia’s $300,000 fee.

Each city would pay for its own security, sanitation, supervised traffic control, water stations, and hubs, consisting of points along the route offering music, dance, art, games and food. Holzer suggested including the Beverly Hills Farmers’ Market and planning events at Beverly Gardens Park.

Except for Councilmember Julian Gold, who recused himself from the conversation because he lives less than 500 feet from the proposed roadway, council members enthusiastically touted the program as a great showcase for both bikes and Beverly Hills.

“This is an opportunity for us as a community to show how getting on a bicycle and using other modes of transportation is encouraged,” Councilmember Lester Friedman said, while suggesting sponsorships at the western Beverly Boulevard terminus. Friedman also stressed the importance of safe vehicle crossing points to help get cars across Santa Monica Boulevard at select points.

Councilmember Mirisch was also supportive, but also advocated researching grants for biking events that take place only in Beverly Hills.

Vice Mayor Lili Bosse has taken part in CicLAvia events in the past, and called it a “wonderful, wonderful program” that will boost the local economy. She raised concerns that the event might be more expensive than anticipated and may result in an influx of parked cars in the residential neighborhoods near hubs. She advocated publicizing the city’s public lots and restricting parking in residential neighborhoods.

Mayor Robert Wunderlich, who has also participated in CicLAvia events, said the event “is very much in line with the things we want to do to promote community, and promote mobility.” 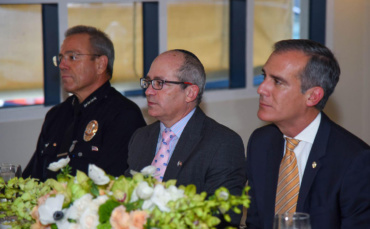 Leaders from the Jewish, Muslim, Christian, African American, and Asian American community came together to find common threads and speak about how to rise above hate together.

“I don’t think we need to start from scratch, but we do need to separate the process,” said Councilmember Julian Gold. 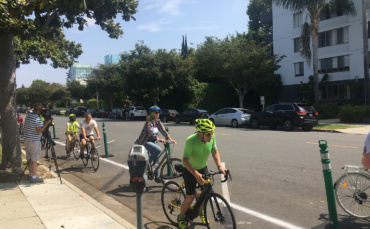