“The city of Beverly Hills always wants to remember what occurred on 911 and never forget,” BHFD Chief Greg Barton told the Courier. “We never want to forget the firefighters, the police officers, and the civilians who lost their lives that day 20 years ago. It’s so important to this community to remember those who gave their lives during this time, and we want to continue every year to have this ceremony and honor those people.”

The memorial garden includes a 30-foot steel floor beam pulled from the wreckage of the World Trade Center, which folded in half following the day’s destruction, and now stands 18 feet tall. The beam is supported by a raised Pentagon shaped base with the names of all 2,977 lives lost etched onto stainless steel plaques. The artifact is positioned next to two stone replicas of the Twin Towers and six stone column water features that represent life and hope for the future. The space is encircled by curved granite benches for visitors wanting to sit, reflect, and honor the events of that day. The surrounding greenery is representative of the field in Shanksville, Pa. The memorial was created with attention to lighting and landscaping to ensure its visibility day or night.

Enclosed in the foundation are copies of the Declaration of Independence, the United States Constitution, the Gettysburg Address, and a piece of the aircraft from Flight 77 along with captain’s insignia wings.

Located on the Fire Department grounds at 445 North Rexford Drive on the North/West corner of Rexford and South Santa Monica Boulevard, the memorial was inaugurated on September 11, 2011, in honor of the 10th anniversary of 9/11. 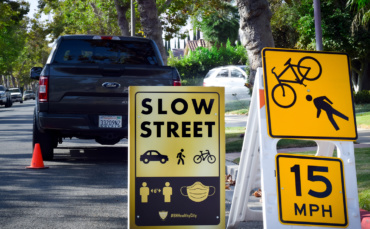 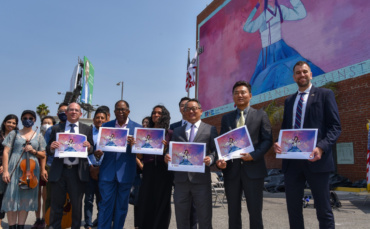