Los Angeles District Attorney George Gascón announced charges against two men suspected of targeting Jewish diners at a Westside restaurant in May. Gascón’s office has charged Xavier Pabon, 30, and Samer Jayylusi, 36, with two felony counts of assault by means of force likely to cause great bodily injury. The charges also include hate crime enhancements. Both men have pleaded not guilty.

“A hate crime is a crime against all of us,” Gascón said in a statement. “My office is committed to doing all we can to make Los Angeles County a place where our diversity is embraced and protected.”

Pabon and Jayylusi took part in a pro-Palestine caravan on May 18. Members of the caravan made their way past Sushi Fumi, a restaurant located north of the Beverly Center. Cellphone video of the incident captures one of the protesters shouting from a jeep with a megaphone, “Israel kills children and women every day. You guys should be ashamed of yourselves.” A diner yells back an expletive at the protester before the sound of breaking glass can be heard.

The frame of the video moves away from the action for roughly a minute. By the time it returns its attention to the opposing groups, members of the caravan have exited their vehicles and one of them appears to push a diner to the ground and kick him. As other members of the caravan begin to leave, another diner swings a stanchion at them, setting off a brawl.

Attorney Mark Kleiman, who represents both defendants, pushed back against allegations that the men had said anything antisemitic. While eyewitnesses have claimed that the members of the caravan shouted antisemitic comments at the diners, Kleiman pointed out that no video evidence of that exists.

“Not one once of evidence that either of these guys said anything antisemitic at all,” Kleiman told the Courier.

News of the charges came as a relief to members of the Jewish community. “We thank prosecutors from the Los Angeles County District Attorney’s Office for filing hate crime charges in the heinous antisemitic assault that occurred outside Sushi Fumi restaurant on La Cienega Blvd. that shocked Jewish communities in LA and around the world,” said ADL Los Angeles Regional Director, Jeffrey Abrams. “Much work remains to be done in the fight against antisemitism and all forms of hate, and this is an important step towards justice.”

Pabon and Jayylusi are scheduled to appear in court on Oct. 6 for a preliminary hearing. Kleiman said that the date will most likely get pushed back.

“Certainly, we need to continue this program in its current form until three months after permanent design standards are in place,” Johnson said. “And something that certainly everyone knows, that sitting outside and enjoying the weather that we have is wonderful, there are some loud cars that go up and down the street.” 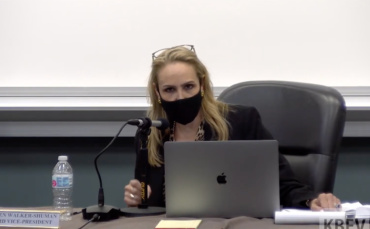 Walker-Shuman Resigns From BHUSD School Board