Beverly Hills residents once again discovered hundreds of flyers containing antisemitic COVID-19 conspiracy theories, marking the second such incident in less than a month. The flyers, which were first reported late on Dec. 18, were distributed throughout the southwest side of the city. Similar flyers were found around the same time in Pasadena and other cities around the country. The Beverly Hills Police Department (BHPD) is investigating the incident.

“The Beverly Hills City Council would like to remind all who commit acts of hatred toward members of our community that these cowardly acts and any divisive attempts of intimidation will be rejected outright,” the city said in a statement signed by all five members of the City Council.

The flyers combine age-old antisemitic tropes with conspiracies about the COVID-19 pandemic. The flyers list members of the government who it claims are Jews, incorrectly identifying at least one person as Jewish. The text, “Every single aspect of the COVID agenda is Jewish,” appears at the top, sandwiched between a Star of David and a pentagram.

Identical flyers were previously discovered on Nov. 28, the first day of Hanukkah, in the northeast area of the flats. A statement from BHPD Capt. Elisabeth Albanese described the flyers as “propaganda style hate speech related to the COVID pandemic and the Jewish people.”

Vice Mayor Lili Bosse took to social media to share her thoughts on the incident. “Once again, these disgusting words of Jew Hatred blaming Jews for involvement with COVID were dropped on the sidewalks of our city. As we have fought for ‘Never Again,’ I am sickened to see once again, this despicable act occur in front of our homes,” she wrote on Facebook. “As a daughter of Holocaust survivors, this cuts to my core of my soul. I know it cuts all of our hearts to see hatred in Humanity still exist. My heart breaks to see this mortifying antisemitism.”

Bosse has received hate mail for her condemnation of the flyers, posting a bigotted email she received on social media. “Shut your stupid Jewish hole,” the subject line read, according to the post. “Those flyers were just the facts.”

This latest incident appears to be a part of a coordinated, national effort led by the Goyim Defense League, a “loose network of individuals connected by their virulent antisemitism,” according to the Anti-Defamation League. Residents in Pasadena discovered identical flyers early Dec. 19 also bearing the group’s logo, according to the Pasadena Police Department. Flyers were found in states across the country, including Texas, North Carolina, Idaho, Vermont, Alabama, Illinois and Florida.

The Anti-Defamation League responded with alarm to the news of the flyers. “We are outraged to once again see antisemitic fliers dropped in Beverly Hills, but now also in Pasadena, which we previously saw on the 1st night of #Hannukah,” The Los Angeles branch of the ADL said on Twitter. The post added that the organization was in touch with law enforcement “to address the situation.”

While some COVID-19 conspiracy theorists have deployed antisemitic rhetoric in increasingly public ways, others have long sought to co-opt the narrative of the Holocaust by conflating public health restrictions with the limits placed on Jews in Nazi Germany.

On Dec. 21, West Hollywood City councilmember Lindsey Horvath shared on social media an image of a poster outside the gay bar and nightclub The Abby. The poster depicts the word “anti-vaxxer” inscribed in the Star of David, in an apparent reference to the badges used to identify Jews by the Nazis. The poster contains the text “report anti-vaxxers” and includes the phone number for The Abby. During a weekend in August, The Abby was the site of protests by a small group of activists over its policy of requiring proof of vaccination or a negative COVID test for entry.

“Senseless acts like this have no home here and will never be accepted,” the Beverly Hills City Council said about the flyers. “Our community is home to families of survivors of the Holocaust who have seen evil and will never give in to such attacks.”

According to the city, the BHPD is “thoroughly investigating” the incident and will bolster officer patrols and private security throughout the city “to ensure a safe holiday season.” 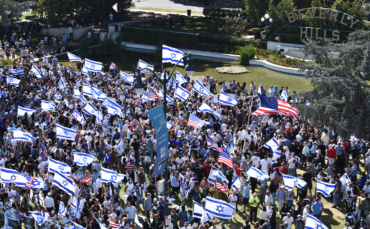 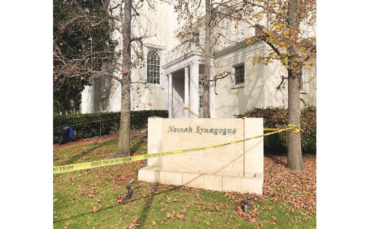