Jon Bosse describes his mother Selma Katz Bosse as a “very selfless person who never wanted attention.” When she passed away at the age of 93 in the early morning of Feb. 15, her family abided by her wishes and held a private service for Selma on Feb. 18 in the presence of family and a few close friends.

Her life touched many more than those in attendance, though.

“If there is something that represented her, the words that come to mind are family, community, kindness and selflessness,” Jon tells the Courier.

The former Selma Ruth Katz was born in New Britain, Connecticut on April 7, 1928. She married Sherwin Paul Bosse on June 17, 1961, and the couple raised three sons together in Steubenville, Ohio. A graduate of Ohio State University, Selma worked as a teacher prior to her marriage. Occasionally, she would serve as a substitute teacher, including in her sons’ classrooms.

Jon speaks with pride about his mom’s role as a community leader.

In the ‘60s and ‘70s, Selma marched for civil rights and women’s rights, he adds.

“Even with modest means, they put us all through private high school and college. My middle brother and I went to school in Pittsburgh, 45 miles away. We lived in the dorms during the week, so for five years my mom drove up to pick us up every Friday, and both parents drove us back on Sundays.”

A great cook and a baker, Selma used to send Jon boxes of chocolate chip cookies while he was away at college and graduate school. She also made cherry cheesecake when they threw an engagement party for Jon and his then-fiance (and current Beverly Hills Vice Mayor) Lili at the Steubenville Country Club.

“She was a homemaker and a community leader. And there was something else about her,” said Jon. “My father ran a wholesale business for steel pipe and plumbing supplies, but my mom was the one interested in the stock market. Before I had my career in investments, my mom would read the financial section of the paper. She was always interested in the markets and would discuss investments and buy a few stocks. A little bit later toward their retirement years she was doing more of it.”

Interests aside, Selma was “completely dedicated to family, and not just the immediate family,” said Jon. “She had relatives all over the world. She was the one who was the center of the family, always bringing people together and talking about the importance of family.”

Selma’s father was born in Poland and eventually came to the U.S. His brother went to Brazil and a sister went to South Africa. “We have dozens of cousins in each of those places. She was always connected to them and did travel to visit them,” said Jon.

One place she was not able to visit was Israel, which she regretted.

“She was a Zionist who believed wholeheartedly in Israel,” said Jon.

Selma did make frequent visits to Beverly Hills to see her grandchildren, and take care of them when Lili and Jon traveled (in addition to Lili’s mom Rose Toren watching them on occasion as well).

“My mom was across the country but would come at the drop of a hat whenever we needed her here,” said Jon.

Selma and her husband Sherwin eventually moved from Steubenville to Palm Desert. After Sherwin passed away in 2012, Lili and Jon brought Selma to Los Angeles. For the last 8 1⁄2 years she lived in Westwood, near Jon, Lili, and their two sons Andrew and Adam.

“She was incredibly proud of Lili. She believed in the importance of leadership. Even way back 25 years ago when Lili was involved with the schools and fundraising, she admired what she was doing. And Lili admired her kind of commitment and leadership. It was reciprocated,” said Jon.

“For the last several years, she could read about Lili in the Courier,” he added.

When Selma suffered some health setbacks in the past year, the family knew that the time they had left with her would be precious. “It was very different than with my dad, whose death was sudden and a shock,” said Jon.

“My mom never thought of herself. She was an incredibly selfless person who sacrificed for her husband and children. That’s the thing that stands out the most about her,” said Jon.

Selma Bosse’s oldest son Michael, passed away five years ago from mesothelioma. She is survived by Jon, Lili and their two sons; her son Steve, who lives in Chicago with his wife Ifaat and their two children Ari and Danielle and the multitude of nieces and nephews and cousins around the country, Brazil and South Africa, all of whom will no doubt carry out the legacy of a life well lived.

In a way, so will the City of Beverly Hills, when Lili Bosse is sworn in as Mayor this April, two days before what would have been Selma’s 94th birthday. 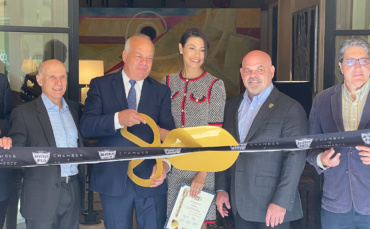