During the forum, Beverly Hills resident TJ Wilk agreed with Reiss. “I live on Reeves and she’s right,” Wilk added. “There’s a smoking issue, and it would be amazing if there was a way we could eliminate that somehow.”

Beverly Hills residents, neighbors, commissioners, and students came out to share their ideas for a televised town hall style meeting as part of Mayor Lili Bosse’s “Live with Lili” initiative. Sitting cross legged on a purple chair at the front of the Municipal Gallery on the second floor of City Hall, Bosse heard from and responded to dozens of members of the public who joined either in person or virtually. The first installment of the monthly forum was broadcast, with 50 people in attendance and ideas ranging from installing more EV chargers to having exercise equipment available at public parks. Bosse heard complaints from several residents about speeding on Olympic Boulevard and smoking on residential streets, and answered questions regarding the future of OpenBH, long-term use of the Gale Yard site, and the purpose of the sharrow markings on city streets. An advocate for transparent and inclusive governing, Bosse used the opportunity to engage in problem-solving dialogue (without a three-minute limit) directly with the community in an intimate, casual atmosphere.

“Last night’s ‘Live with Lili’ felt electric and inspiring,” Bosse told the Courier. “It was very exciting to be surrounded by many new and familiar faces in a very intimate warm environment. I truly wanted everyone to feel that we were having an open conversation that felt similar to the intimacy in a living room at City Hall. I loved how open and free people felt to share their great suggestions and ideas. I will be giving updates at each “Live with Lili” as to what we were able to implement of the suggestions and share timelines and updates on the others. Today, already one of the residents proudly shared on her social media that her suggestion of sidewalk signage for no smoking on her street was already installed within hours of sharing her idea. I am truly loving the ability for connection with our residents and having their ideas shape our city.”

After suggesting that no smoking signage be expanded to residential streets, particularly on Reeves Drive, Cultural Heritage Commissioner and Beverly Hills resident Kimberly Reiss posted photos on Facebook of just that the next day. “Last night I asked and today it was DONE,” Reiss wrote in a May 10 post. “It’s how we do it in BH! Thank you Live with Lili!!”

During the forum, Beverly Hills resident TJ Wilk agreed with Reiss. “I live on Reeves and she’s right,” Wilk added. “There’s a smoking issue, and it would be amazing if there was a way we could eliminate that somehow.”

“I just think they’re kind of ugly and there’s so many of them,” 17-year-old Beverly Hills High School student Mateen Yeshova said of the green sharrow shared-lane marks on the streets. “There’s like eight off Santa Monica. There’s like five, six in such a small distance, I don’t think we needed that many. Can you give me like a reason why we put so much?”

The sharrows are part of the city’s Complete Streets program, Bosse explained. Legally, bikes and cars can share the road, and the city installed the sharrows to provide added safety for riders and drivers. “Some of the issue though…which I know the city is working on, is education as to exactly your point,” Bosse said. “Why did they show up? What does it mean?”

As new resident of the southeast, Human Relations Commission Vice Chair Noelle Freeman asked Bosse about her vision for that part of the city, including the Gale Yard site, which the city will retain from Metro in 2024.

“I’m open to what this community feels,” Bosse responded. “I know one of the things that we’ve talked about that I think is certainly worth taking a very serious look at is a police substation.”

To watch the first Live with Lili, visit

The next event will be held on June 23 at 7 p.m. at the City Hall Municipal Gallery. 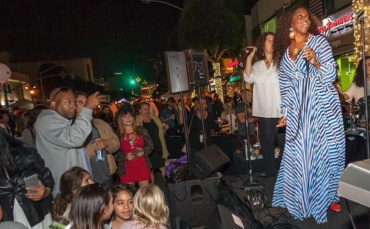 The letter was provided exclusively to the Courier in the hopes of “spreading the message for civility and positive human relations.”