Term Limits Measure May Not Hold Up to Scrutiny

If the measure passes, it would bar Councilmember John Mirisch, Mayor Lili Bosse, and Vice Mayor Julian Gold from seeking reelection (though Mirisch would be allowed to serve out his fourth term if reelected to the Council this June).

As Beverly Hills voters begin to receive their mail-in ballots for the June 7 primary election to decide on three open City Council seats and the City Treasurer, they will also have the chance via Measure TL to impose term limits on those positions for the first time in the city’s history. But the Measure contains a provision that many not pass legal muster. Namely, its attempt to apply to terms served prior to the law’s enactment.

A divided City Council voted to place the question of term limits on the ballot in February 2021, with Councilmember John Mirisch voting against the move. Then-Vice Mayor Robert Wunderlich voiced objection to applying the limits to past terms, but nonetheless voted to allow residents to weigh in.

If the measure passes, it would bar Councilmember John Mirisch, Mayor Lili Bosse, and Vice Mayor Julian Gold from seeking reelection (though Mirisch would be allowed to serve out his fourth term if reelected to the Council this June). While Bosse and Gold have committed that they would not seek a fourth term regardless of the measure’s outcome, Mirisch has not made the same pronouncements on a possible fifth term bid.

“I certainly am not thinking ahead that far, but I wouldn’t rule it out for that reason,” he told the Courier.

Cities in California are permitted to impose term limits on city councils. The Government Code explicitly states, however, that the limits should not consider terms served prior to the adoption of the law and “shall apply prospectively only.”

But Measure TL says that “an individual’s previous and current terms of office shall be counted for the purpose of applying the term limits adopted herein,” though it makes an exception for candidates currently seeking office.

In his analysis of the measure, City Attorney Laurence Wiener acknowledges that the provision leaves the law open to legal challenge. But, he says, the issue has never come in front of a court before.

While no California judge has weighed in on the matter, a 2012 term limit initiative passed by the Northern California city of Loomis elicited an opinion by then-Attorney General Kamala Harris. In response to a request for guidance by a state lawmaker, Harris opined that Loomis’s term limits could not apply to terms previously served.

“A term served on a town council that was served prior to the effective date of a local initiative term-limit ordinance may not be counted against the term limit imposed by that ordinance,” Harris wrote. “We find no ambiguity in the requirement of Government Code section 36502(b) that locally enacted term-limit provisions must apply prospectively.”

As written, Measure TL states the word “‘prospectively’ does not preclude a law that applies to future acts, but which is guided by the acts or conditions which have occurred prior to the law’s enactment.”

Richard Hasen, a University of California Irvine law professor and election law expert, described the measure’s logic as “nonsensical and an oxymoron.”

“If it is looking at acts or conditions which occurred prior to the act’s announcement, it is retrospective not prospective,” he told the Courier. “I agree with the [Attorney General’s] opinion that this is not ambiguous, and any actions taken before the passage of such a law may not be taken into account in determining if someone has stayed in their office beyond the allowed number of terms.”

To Mirisch and other residents, the Council’s decision to place the question on the ballot had an ulterior motive. “They’re basically taking the word prospective and saying it actually means retroactive,” Mirisch said. “But that to me does obviously indicate that in some respects, it was targeted at me.”

Gold and Bosse have vigorously defended their votes to place the measure on the ballot against accusations of singling anyone out. “The fact of the matter is that the ordinance is not just about John,” Gold said. “The ordinance is about Lili and it’s about me, and ultimately it’ll be about Bob and Lester, and it will be about all of those who came before should they ever want to seek reelection to a position that they held for three terms.”

Were he to run for a fifth term or lose in June and run again for a fourth term at a later date, Mirisch says he “would be forced to probably make a legal challenge, unless maybe the Council majority changed his mind.”

If that happened — and if a judge sided with Mirisch — Hasen notes that the measure includes a severability clause.

“If this passes and this part of the ordinance is interpreted as in conflict with the Government Code, the measure can go into effect without considering terms before the passage of the measure,” he said.

In other words, if a court sides against the city, the three-term limit would remain without impacting those who had previously served terms. 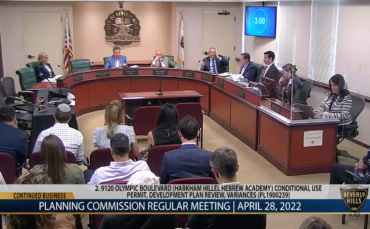