President Joe Biden visited a Metro subway construction site in West Los Angeles on Oct. 13, and then made a surprise stop at a popular taco restaurant in Westwood.

President Joe Biden visited a Metro subway construction site in West Los Angeles on Oct. 13, and then made a surprise stop at a popular taco restaurant in Westwood.

“Every year, people take more than 22 million rides on your subways, your light rail and your buses. It’s how so many people get to work and school and how tourists and locals explore this world-class city. But the transit system needs an upgrade, badly. You know that.”

The President added, “That’s exactly what you’re doing. But it’s being funded in part through this infrastructure law.”

Biden noted that the Metro project, which will feature two stops in Beverly Hills, will drastically cut the travel time  from downtown to West Los Angeles and decrease carbon dioxide emissions. He pointed to ongoing renovations to the terminal area at Los Angeles International Airport and an eventual rail connection. He said improvements are being made to improve the movement of cargo in and out of the Los Angeles-Long Beach port complex.

Biden also talked about efforts to rebuild bridges and other transportation infrastructure across the state, along with ensuring access to the internet in low-income neighborhoods and bolstering water delivery systems.

“It’s been a rough four or five years for the country. … but there’s bright spots where America’s reasserting itself,” he said. “Like here, where the best workers in the world are hard at work building a better future for all of us. … We just have to keep it going, and I know we can. We are the United States of America, and there’s nothing, nothing that’s beyond our capacity.”

After his 20-minute speech, Biden got back into his motorcade to return to his hotel in Westwood. He made an unannounced stop, however, to sample some local delicacies. Namely, the famous fare at the Mexican restaurant Tacos 1986 at 10874 Kinross Avenue.

Restaurant owner Jorge Alvarez told the Courier that his establishment had no idea that the President would stop by.

“We didn’t get advance notice. The Secret Service showed up and said that someone important was coming in. They took over the kitchen and started telling us to put anything sharp away. All of a sudden, the President walked in with Ms. Bass and Ms. Solis,” said Alvarez.

He offered the President a “fifty percent public service discount” for the order of quesadillas, carne asada tacos and chicken tacos. Biden’s bill was less than $17 but he gave cashier Isaias Alejo $60 and told him to give the next customer a free meal.

Biden arrived at LAX just before 5 p.m. Oct. 12 , and was greeted by Bass, Garcetti and Padilla. 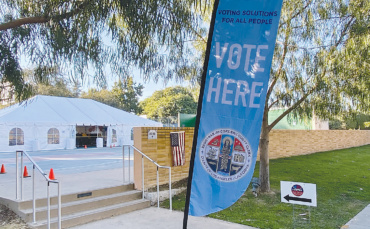 "Based on the most recent election results, I’m thrilled to see that my campaign and plan for our school district resonated with the community and I look forward to the opportunity to serve on the BHUSD Governing Board. 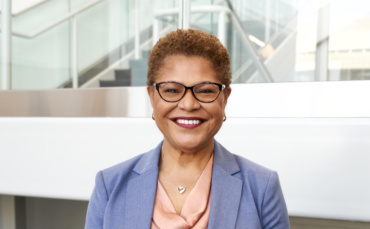 Rick Caruso on Why He Should Lead Los Angeles

The race for Mayor of Los Angeles is in its final stages, with ballots for the Nov. 8 election expected in the mail in early October. Developer Rick Caruso and Rep. Karen Bass are maintaining a packed schedule of campaign events as each vies to become the first new mayor of the City of Angeles in nearly a decade. In two exclusive interviews, the Courier spoke with both Caruso and Bass about key issues resonating for all Southland residents. Part One of this series will spotlight Caruso. Part Two will appear in the Oct. 7 issue of the Courier and feature Karen Bass.