A Fresno Superior Court Judge has tentatively ruled against Beverly Hills and 24 other local governments in their case against the California Bureau of Cannabis Control. The case, County of Santa Cruz v. Bureau of Cannabis Control, involves the issue of cannabis delivery and the power of local governments to regulate it within their jurisdiction. While the ruling will effectively dismiss some of the plaintiffs from the case, Beverly Hills will likely survive.

In 2016, California voters elected to join a growing list of states to allow recreational marijuana with the passage of Proposition 64, or the Adult Use of Marijuana Act (AUMA).

A key element of Prop 64 was its emphasis on local control. The original text of the proposition explained, “The Adult Use of Marijuana Act sets up a comprehensive system governing marijuana businesses at the state level and safeguards local control, allowing local governments to regulate marijuana-related activities.”

But in April 2019, a group of 25 local governments claimed in a lawsuit that the agency in charge of regulating weed within the state, the Bureau of Cannabis Control (BCC), had run afoul of that original promise. By passing a regulation that allowed for weed delivery “to any jurisdiction within the State of California,” BCC had circumvented local ordinances that banned such deliveries.

The lawsuit faced a setback on Aug. 6, though, when Fresno Superior Court Judge Rosemary McGuire issued a tentative ruling in favor of the BCC. The ruling centered on whether some cities even had standing to sue the BCC, pointing out that some of the plaintiffs lacked explicit ordinances banning cannabis delivery.

According to the ruling, “the issues here are not yet appropriate for judicial resolution due to the hypothetical nature of plaintiffs’ alleged injury. This is because some of the plaintiffs either do not have an ordinance regarding commercial cannabis delivery…or do not ban such delivery.”

But as Beverly Hills spokesperson Keith Sterling pointed out, the ruling may not apply to the City.

Beverly Hills passed its own local control of the cannabis industry in Aug. 2017. Under Ordinance No. 17-O-2734, the City banned all commercial cannabis activity, including “all deliveries of cannabis or cannabis products.” The ordinance made an exception for medical marijuana.

Judge McGuire’s ruling “invited” plaintiffs without standing to withdraw from the case. Those local governments with ordinances that conflict with the BCC’s regulation, such as Beverly Hills, must now submit evidence of the ordinances.

The judge noted in her ruling that all the parties in the suit had represented themselves as having relevant ordinances. A trial brief on behalf of the plaintiffs stated, “Each Plaintiff alleges that it has adopted ordinances or resolutions regulating—or in some cases prohibiting—commercial cannabis deliveries within its jurisdiction.” This, the ruling noted curtly, was “not supported by the evidence.”

The judge granted an extension for approximately one month, for the parties to submit further briefing on the issue of ripeness of the issues.

According to Sterling, the City will “await the final decision and determine what, if any, action may be necessary.” 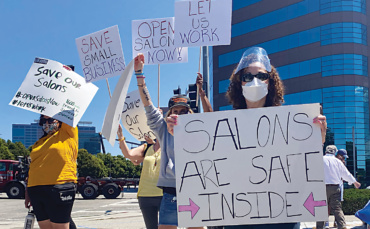 Taking Care of Your Back During the COVID-19 Crisis

Quick fixes include setting up a high bar area or stack of books at home so you can stand while working on your laptop. “You just have to think outside the box when you’re at home since it’s not healthy to sit all day,” said Perry.