As a result of issues raised in the May 9 meeting, solar panels will be added on the roof of the Roxbury Park Community Center, city staff have started working with Southern California Edison to install more EV stations, more information about bikes lanes and sharrows has been disseminated, no smoking signs have been placed on Reeves Drive, and next week signs prohibiting large delivery trucks will be placed on Reeves. According to Bosse, the Beverly Hills Police Department (BHPD) has increased enforcement along Reeves Drive since May, and businesses have been notified by the city prohibiting large delivery vehicles. About 35 residents attended the hybrid meeting to share ideas, suggestions, things that are working well and what they think needs improvement in the city.

“We’re all ears and you can be assured that at next month’s meeting, I’m going to have your answer and maybe hopefully even have it implemented,” Bosse said.

Beverly Hills resident and business owner Eric Cohen used the venue to share his experience with the BHPD after he and four neighboring business owners were burglarized in January of this year. According to Cohen, two suspects were caught on his surveillance camera footage picking the lock at Video Valet, Cohen’s concierge inflight entertainment company on S. Beverly Drive, and others. The suspects stole checkbooks, credit cards, computer hardware and an estimated $10,000 worth of stolen iPads.

“We had all the video footage, we worked very closely with the detectives,” Cohen said. “They could not catch the criminals because they lived in Northern California, and they assured us, all of us victims, that as soon as these women came back into town, that they would catch them… and after about four or five months we’d all sort of given up. Until one day, I got a phone call last month.”

Two suspects were arrested in May of this year for burglary in connection to the case, BHPD’s Lt. Giovanni Trejo confirmed. According to Trejo, the two suspects were connected to other similar burglaries that occurred in January, March, and April of this year. Both suspects are from Northern California.

After working closely with BHPD and providing them with all relevant video footage and receipts from various restaurants and stores detailing fraudulent charges, Cohen was disappointed when detectives told him to be patient. “You know, when somebody says, ‘we’re going to get them,’ after five months, you’re like yeah, maybe,” Cohen told the Courier. “Big difference is we got them. They came back, and we got them, just like they said.”

The criminal case is active and going through court proceedings, Trejo told the Courier.  Echoing the words of BHPD Chief Mark Stainbrook, “If you come to Beverly Hills to commit a crime, we will catch you,” Cohen told the Courier. “And that’s what happened here.”

At the public meeting, residents asked about bringing back the Beverly Hills Community Farm, which was founded in January of 2020 and briefly occupied the vacant retail space at 414 N. Bedford Drive with nine large hydroponic towers. Residents also asked about how the city purchases property, adult education programs, and creating a free shuttle bus in Beverly Hills that stops at senior centers, Cedars-Sinai Medical Center, grocery stores and shopping centers.

Questions were also asked about enforcement violations regarding misuse of meters designated for food pickup orders and the possibility of establishing a GoFundMe on the city’s website to support fallen or injured Beverly Hills police officers.

“We’re always looking to buy property,” Bosse said. “We recently bought property on Robertson, and one of the suggestions on that street is to put affordable housing. We bought property on Wilshire, by subways, by the Gale Yard and that whole area, and we’re going to have a lot of public conversation around that particular property.”

To highlight the importance of mental wellness through education, Bosse is collaborating with spiritual teacher Dr. Deepak Chopra and holocaust survivor, psychologist, and author Dr. Edith Eger to engage the adult community with programming that focuses on resilience and healing. In 2017, as a part of Bosse’s SOUL (Seek Original Unique Learning) initiative, Chopra led two hour-long meditations open to the public. Dr. Eger will kick off the first Mayor’s Mental Wellness Series on July 15 at City Hall from 10:30 to 11:30 a.m., and Chopra on Sept. 23. The series will be held in person, with virtual options available.

The next LIVE WITH LILI event will be held on July 13 at 7 p.m. in the Municipal Gallery at City Hall. 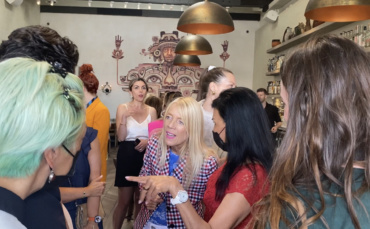 Business with Bosse Goes to MÍRAME

Mayor Lili Bosse met with members of the community on June 15 at the most recent Business with Bosse event, which took place at MÍRAME on Canon Drive. 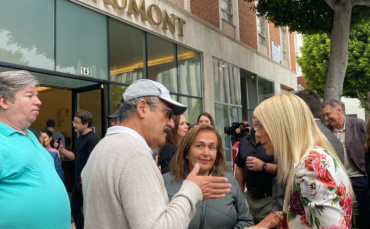 Chaumont Bakery on South Beverly Drive was the setting for the latest Business with Bosse event on May 19.