The Beverly Hills City Council heard a diverse agenda at its regular meeting on July 19. Much of the first meeting concerned itself with administrative duties, such as approving future meeting dates for the rest of the year. The Council also set a hearing date for an appeal concerning the private club and co-working space Spring Place for November 15.

Spring Place has repeatedly found itself at odds with the city since its opening in 2018. Located at the vertex of Wilshire and Santa Monica Boulevards in the Gores Group building, Spring Place offers members access to shared workspaces and amenities such as a bar, lounges, a restaurant, and programming and events. The exclusive club has one other location in New York’s Tribeca neighborhood.

The Planning Commission previously granted Spring Place the right to hold “occasional” rooftop events that go no later than 10 p.m. and with 72-hour notice to the city. Furthermore, events could not have live or amplified music and could not be open to members of the public.

But in a contentious hearing in May, the Planning Commission accused the club of flouting those restrictions, holding multiple events that violated its agreement with the city. The club’s management acknowledged making mistakes in the past but attributed them to the financial pressures related to COVID-19 and said that changes in management were made to right the ship.

The Planning Commission pointed out that earlier changes in management failed to lead to compliance. The commission placed stringent limits on its 6,000-square-foot rooftop space, which Spring Place appealed to the City Council.

Also on the planning and development front, the Council voted to extend the hearing date on an appeal of the Cheval Blanc Beverly Hills project filed by a law firm on behalf of Unite Here Local 11, the union representing hospitality employees in Southern California.

The appeal challenges the Planning Commission’s approval of the project’s subdivision map. Unite Here has consistently opposed the ultra-luxury hotel development proposed for Rodeo Drive. The extension will allow the Council to consider the appeal in conjunction with other elements of the project.

The Council voted to approve the receipt of hundreds of thousands of dollars in funding to the city’s police and fire departments under the State Homeland Security Program and Urban Area Security Initiative, both of which pay for planning and training for high-threat, high-density urban situations such as terrorist attacks. The funds will allow the Beverly Hills Police Department (BHPD) to purchase equipment including “tactical robotic systems, unmanned aircraft systems, and vision optics,” according to a report compiled by staff.

The city’s police will soon carry new weapons for the first time since 2009 after the City Council approved the purchase of 130 standard issue handguns from Caps Armory, LLC, for $111,000. While a BHPD committee recommended the purchase back in 2019, the pandemic resulted in a hold on the 9mm semi-automatic handguns.

With work continuing on the Metro D Line, the Council authorized City Manager George Chavez to submit a proposal for BHPD to police the forthcoming Metro subway stations at Wilshire/La Cienega and Wilshire/Rodeo. Residents and city officials have previously raised safety concerns around the new subway, which will connect Beverly Hills to downtown Los Angeles by 2025.

Then, the Council voted on whether to oppose, support, or remain neutral on state legislation that would potentially impact the city. Each year, the city sets out a legislative platform, establishing the city’s position on relevant legislation making its way through Sacramento and Washington, D.C. and giving direction to the city’s lobbyists.

The Council backed a host of bills designed to expand and improve the state’s mental healthcare infrastructure, while opposing two bills that would restrict the ability of law enforcement to conduct coercive or manipulative interrogations of suspects 25 or younger and increase transparency of police radio communication.

Finally, the Council recognized outgoing Beverly Hills Rotary Club President Charles Black III for his “accomplishments during his term.” Black succeeded former Rotary President, Councilmember Sharona Nazarian. Then, the Council recognized July as Recreation and Parks month, presenting a proclamation to Director of Community Services Jenny Rogers and Assistant Director of Community Services Patty Acuna that recognized “the importance of [the city’s] parks, recreation trail, open space, and facilities as a respite for all.” 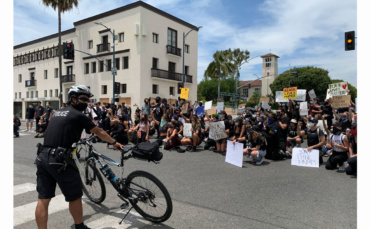