The Landmark Nominations Advisory Subcommittee of the Cultural Heritage Commission met at a special meeting Aug. 7 to decide upon eight nominees for Golden Shield Cultural Recognition.

The Landmark Nominations Advisory Subcommittee of the Cultural Heritage Commission met at a special meeting Aug. 7 to decide upon eight nominees for Golden Shield Cultural Recognition. The Commission will narrow the eight selections to four, which it will present to the City Council for final approval.

Rachmaninoff was a world-renowned Russian pianist, conductor and composer who lived and died at his Beverly Hills home on 610 North Alpine Drive. He is remembered as one of the greatest composers and musical revolutionaries of the Romantic Era, compared only to other grandmasters, like Tchaikovsky.

The acclaimed, Academy Award-Winning Stewart spent nearly 50 years in his Beverly Hills home at 918 North Roxbury Drive. His career spanned more than half a century, during which he starred in classics such as “It’s a Wonderful Life,” “Vertigo” and “Rear Window.”

Benny was the violin-playing comic famous for his work in radio, television and film. He and his wife Mary Livingston purchased the home at 1002 North Roxbury Drive brand-new in the 1930s. It is known for its Georgia revival-style architecture and white brick cladding.

Interestingly the two Roxbury nominees are located on the same block as another home whose historic status was the subject of heated debate before the City Council this year. That residence, at 1001 Roxbury Drive, is currently being demolished.

The Warner-Beverly Theater was located at 9404 Wilshire Boulevard and was commissioned by Jack Warner and Warner Brothers Studios. While it was operational, between 1931 and 1989, the theater was host to major motion picture premiers, such as 1962’s “Lawrence of Arabia” and 1954’s “White Christmas.” The building’s shape was made to resemble a ziggurat and was crowned with a spire that spelled out “Warner.”

The Beverly Hills Blum’s Restaurant opened in 1959 at the southeast corner of Beverly Drive and Wilshire Boulevard, but the business originally came from San Francisco. Blum’s was home to immense amounts of goodies and sweets, selling cake, ice cream, burgers, sandwiches, milkshakes and more. The Beverly Hills location was unique in adding a sophisticated aspect to the Blum’s brand, being the first location to have a cocktail bar as part of its men’s lounge.

The Beverly Hills Nursery was established by the Rodeo Land and Water Company and was located on the south side of Sunset Boulevard, between Palm Drive and Alpine Drive. In the mid-1920s, as the eastern part of Beverly Hills began to be developed, the nursery relocated to a 16-acre location at the corner of Santa Monica Boulevard and Wilshire Boulevard, where the Beverly Hilton Hotel is currently located.  The nursery ceased operations in 1946.

The Sterling Plaza is located at 9429-9441 Wilshire Boulevard, but it was previously known as the California Bank Building. The original owner of the building was Louis B. Mayer, the co-founder of MGM Studios. Before it was a bank, the location was home to the historical Beverly Hills Garage gas and service station.

The Beverly Hills Speedway was a wooden racetrack built in 1919 and opened in 1920. The track was the first in the United States to incorporate banked turns. Before being demolished in 1924, the racetrack hosted a number of famous racers, like Ralph DePalma, Tommy Milton and Gaston Chevrolet. If selected as a Golden Shield recipient, the plaque would be placed at the northeast corner of El Camino Drive and Wilshire Boulevard, adjacent to the Beverly Wilshire Hotel.

The Cultural Heritage Commission will vote to narrow the eight nominees to four at their next meeting on Oct. 12. 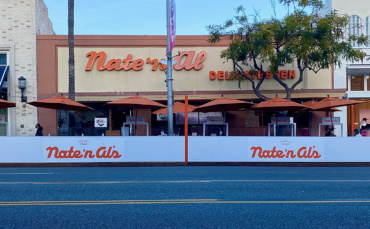 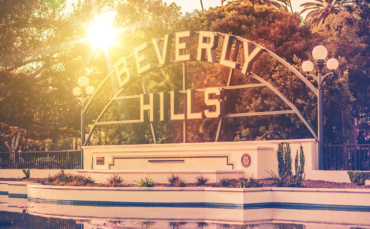 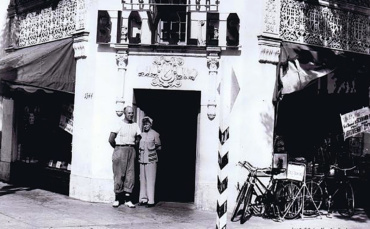 The Beverly Hills Cultural Heritage Commission kicked off 2022 by finalizing its three newest selections for the Golden Shield Award during its first regular meeting of the year on Jan. 12.