Not Today Cancer Hosts the Second Annual Run of the Stars

On Sept. 25, runners and walkers of all ages gathered at Roxbury Park to participate in the second annual Beverly Hills Run of the Stars Marathon. The 5k was sponsored by Not Today Cancer, a local nonprofit organization dedicated to raising funds for cancer research.

On Sept. 25, runners and walkers of all ages gathered at Roxbury Park to participate in the second annual Beverly Hills Run of the Stars Marathon. The 5k was sponsored by Not Today Cancer, a local nonprofit organization dedicated to raising funds for cancer research.

Beverly Hills residents JJ Duncan and Stacey Book are the founders of Not Today Cancer. The married couple has been dedicated to the fight against cancer since their own son and former student at Horace Mann Elementary School, Mason, was diagnosed with T-Cell Acute Lymphoblastic Leukemia at the age of nine. Mason was able to fight off his cancer for nearly two years before passing away. He is celebrated by his family and community for his strength and unrelenting optimism. “People often say someone lost their battle with cancer, but I don’t think Mason lost,” Duncan said at the marathon. “Look at all these people. We’re all out here raising money for pediatric cancer research… Mason’s mission continues, he did not lose. We are all warriors together.”

On the day of the marathon, participants eagerly readied themselves under the banner at the start line. Some participants dressed up in silly costumes, while others wore high-performance gear. The air horn sounded and the army of runners was off, on their way to cover over three miles of Beverly Hills on foot. Everyone went at their own pace, most were smiling and many were laughing. Community members were excited and enthusiastic about standing together for such a demanding cause. “We are stronger together,” said Andrea Rosenfeld, Beverly Hills resident and returning runner of the marathon. “We can unite around a common cause and when we find something that needs to be supported, everybody comes together to do that.”

Not Today Cancer, donors and participants successfully raised nearly $50,000 as of the day of the event. Book was ecstatic to see the crowd of supporters but expected nothing less of her community. “There were remarkable things we learned going through pediatric cancer with Mason and one of them is that this community is amazing,” said Book. “When we say we’re going to save lives and Not Today Cancer is going to save lives, it is a big mission, but this community can do it.”

At the finish line, participants were met with cheers, hugs and high-fives before receiving their medals of completion. Valon Xharra was the first to complete the 5k, followed closely by Artur Feoktystov. 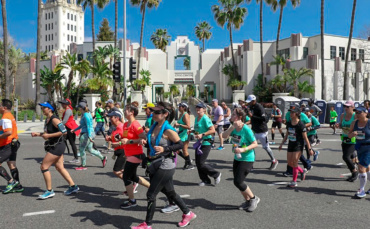 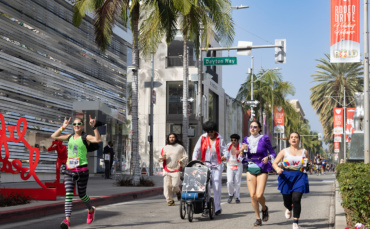 Beverly Hills joined hands with other cities on Nov. 7 to create the 26.2-mile track for the Los Angeles Marathon. 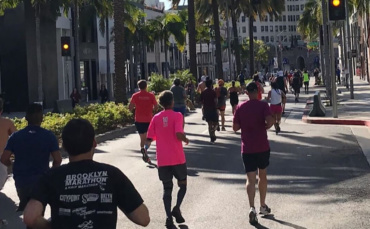 The LA Marathon returned to Beverly Hills this past Sunday, March 20, with athletes running through the city for miles 16 and 17 before ending in Century City.