In April, Mayor Lili Bosse, a longtime champion of women, announced her “30 by 30” initiative. Its purpose is to get the Beverly Hills Police Department 30% female by 2030. Among the new wave of female officers is Maraya Contreras. The pretty, petite 29-year-old is not only one of 15 female police officers in Beverly Hills, she is the only female motorcycle cop on the local police force. For perspective: there’s currently only one uniformed female motorcycle officer on the LAPD and only one female CHP motorcycle officer in the entire state of California.

In uniform, Contreras has a commanding presence. With 25 pounds of tactical gear effortlessly strapped to her body, you’d think she was born to do the job. But she hadn’t always thought about pursuing a career in law enforcement.

Contreras had wanted to be a veterinarian as a child growing up with her two brothers and sister (all her senior) in sea swept Oceanside. But she had a life-altering experience when she was in high school that would change her career path. It was on a mandatory field trip to the local courthouse about a month before prom. She was 17 years old. “I remember there was this girl sitting in the courtroom with an eye patch and a bandage around her neck,” she recalls. “She was really young, only a few months older than me. I was wondering what had happened to her.” It turned out that the young woman had been involved in a traffic collision. She had taken her mom’s car and had been drinking and using drugs. She ran a red light and T-boned another vehicle and then sped off. “Pamela Marabeas, I still remember her name,” says Contreras of the victim of the collision. “She was just on her way to work. And she passed away on impact. Her son and daughter were there in the courtroom. And I just remember their pain and the senselessness of the situation and thinking ‘I’m going to stop this,’” she said. “I’m going to stop others from going through this.”

Initially, Contreras thought being an attorney was the best course of action to accomplish her goal, and she went on to take law classes at Mira Costa community college. But during one of her first lecture courses, taught by a former San Diego Police Deputy, she decided to pivot to law enforcement.

“What was impressive to me was his memory and that he was incredibly calm while retelling his stories of incredibly stressful situations,” she says. “And, I’ll never forget what he said about the police force, that it was ‘the family you didn’t ask for, but the family you got.’ And it’s the only profession, other than maybe the military, where you would take a bullet for somebody else. I remember thinking, ‘I wanna do that. I wanna be part of that.’”

After completing her two years at Mira Costa, Contreras transferred to San Diego State to finish her degree in Criminal Justice, all the while working her way towards her new goal of applying with the police department. And in 2016, she entered the LASD North Academy in Santa Clarita. “The first month was tough because I’m a perfectionist,” she explained. “I played sports, and I’m used to a coach yelling at me, but this was different. It was correction and command. They used the sports analogy a lot, actually.

If you’re the star athlete on your sports team and somebody else messes up, you’re still going to get all the praise. Law enforcement isn’t like that. If somebody messes up, it could be your life.”

Contreras passed the rigors of the Academy and in 2017 became a police officer. But she was harboring a secret ambition—she had decided to try to become a motorcycle cop. She didn’t even tell her parents.

“I wouldn’t say they’re are helicopter parents, but they are very protective,” says Contreras. “My mom works with abused and neglected children, and all she wanted to do was keep us safe. So, I could play normal sports like baseball and soccer, but if I wanted to ride a dirt bike or a quad, or a jet ski, absolutely not.”

But her mother’s potential disapproval didn’t deter Contreras, neither did the fact that she had never ridden a motorcycle before. First, she bought her own bike, a 300 cc BMW G310 R motorcycle and learned how to ride. “I got some pretty gnarly bruises, some gnarly burns from the exhaust pipe hitting me. It was crazy,” she says.

In 2019, with department approval, Contreras enrolled in training courses at the West Valley Motorcycle Academy. There she learned about the mechanics of the patrol motorcycle, a 1200 cc BMW R1200 RT, and practiced grueling maneuvers, including how to lay down the massive, 700-pound bike while remaining on it and then standing it back up again. 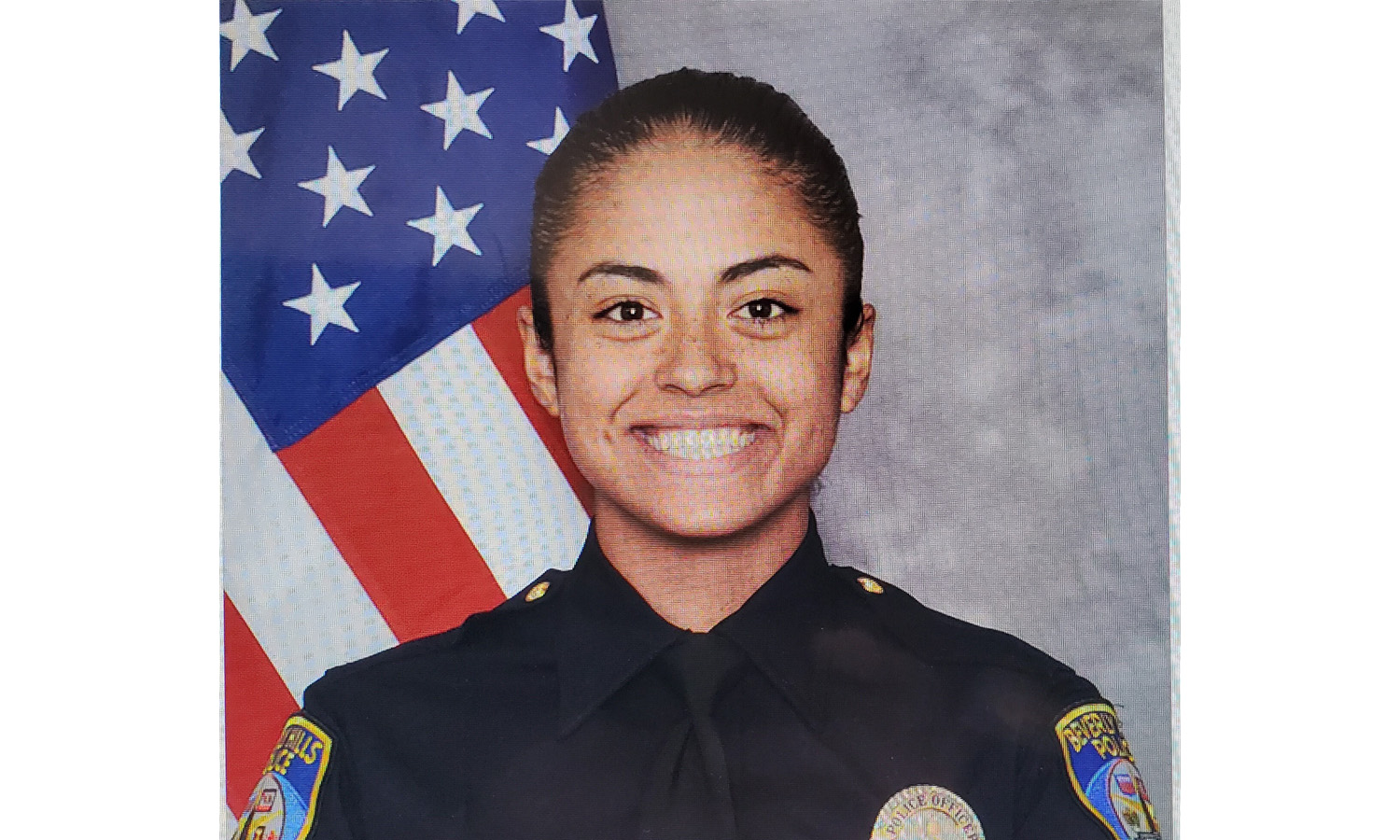 It took her two attempts, but she passed the test. And in 2021, she became Beverly Hills’s first female motorcycle cop.

When she was approved, Contreras decided to let her family in on her secret. She took a screenshot of the memo announcement from the Police Chief and texted it to her parents, captioning it, “I’m doing it!” As expected, her mother was reticent, but her father was thrilled.

“My dad is usually very stoic. There were only two times before that I can ever remember him saying, ‘I’m proud of you.’ Once when I graduated from college. And when I finished the police academy,” says Contrares, wiping away tears. “That day he was very proud.” She explains that her father had wanted to be a CHP officer before becoming an engineer and, in a sense, he was completing that dream through her. “My dad is a first-generation Mexican America and grew up on a farm. Whenever we were being ungrateful as kids he would tell us stories about all the things he didn’t have—toys… or a normal bathroom. And I remember him telling me, ‘Maraya, you have to work harder than everybody else because you’re a female and you’re Latina.”

Though her gender on the police force isn’t something she really thinks about, Contreras said the department made a bigger deal of her joining their motor division than she did. But she does get a kick out of watching the reaction from little girls when they see her on patrol. “I think that’s probably been one of the coolest parts of my job,” she says. “Seeing little girls tug at their mommies, and especially their daddies, shouting ‘Look!’ with wide eyes and smiles. I think that’s so cool because I don’t think I ever saw a female motor cop when I was growing up.”

In fact, Contreras says she grew up fearing the police “because family members and my parents would say, ‘If you don’t behave, I’m going to call the police and they’re going to arrest you.’ I remember thinking when I got older that it was such a terrible idea to put in someone’s head because they’re afraid that if they need help, they’re going to get in trouble. I wanted to change people’s perspectives on police. When you see the police, you shouldn’t be afraid to say hi. And that was huge coming from Oceanside to Beverly Hills, where everybody waves at you and says hello. That was such a strange concept to me, but that’s what makes this city so great.”

Contreras admits that if you asked her five years ago why she decided to work in Beverly Hills she would have said that she thought patrols would be quieter. The protests, riots, looting, and rising crime have since disabused her of that notion. But there’s one thing that keeps her here—the community.

During the early pandemic looting on Rodeo Drive there was an outpouring of appreciation for the police. Restaurants and residents sent feasts to feed the officers while they worked exhausting tactical watch shifts (12 hours on 12 hours off ).

“People always ask me why I don’t work closer to home and I tell them because where else are you going to find this kind of support where people want to wave at me, and they truly appreciate what I do, especially in today’s climate,” she says. “You’re not going find it. I promise you. You will not find it anywhere else.”

Coffee With a Cop Scheduled for March 12

“No meeting agenda, speeches, or specific topics. Just a chance to get to know your local police department over a good cup of coffee,” the department said in a social media post. 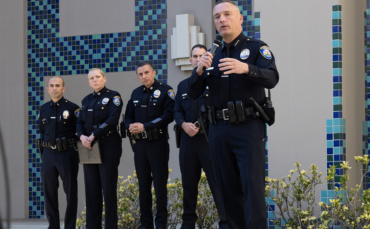