By The Aug. 25 Live with Lili event featured a special debut appearance by the Beverly Hills Police Department’s (BHPD) newest member, support K9 NAMI. Escorted in by BHPD Chief Mark Stainbrook, NAMI is the city’s designated mental health dog. His name is an acronym for National Alliance on Mental Illness. NAMI resides at the police department and is available for drop in visits from the community.

The Aug. 25 Live with Lili event featured a special debut appearance by the Beverly Hills Police Department’s (BHPD) newest member, support K9 NAMI. Escorted in by BHPD Chief Mark Stainbrook, NAMI is the city’s designated mental health dog. His name is an acronym for National Alliance on Mental Illness. NAMI resides at the police department and is available for drop in visits from the community.

“If you come by the police station, she’s there 24/7 and she provides mental health support to officers,” Stainbrook said. “The dispatcher loves to have her in dispatch…she’s always going around to different departments.”

As she has done at previous Live with Lili events, Mayor Lili Bosse began the Aug. 25 session by providing updates on ideas discussed at previous meetings. Bosse shared with the crowd that staff are working on making the Parks and Recreation website more user-friendly, reminded the community of upcoming cultural events like the Beverly Hills art show, has BHPD exploring adding police kiosks and a blue light safety system in the city and around the two metro locations. The blue light safety system includes strategically placed, high-visibility, emergency alarm stations that would allow people to directly ping the police department at the push of a button in an emergency.

During the Aug. 25 meeting, several residents suggested that signs and stickers be placed near tour bus locations to direct and guide visitors through the city. Ideas ranged from having a QR code that uploads an interactive map of the city when scanned, highlighting areas of interest and programming for residents and visitors alike to community bulletin boards or a calendar of upcoming events and community reminders.

“We’ve already heard three people for QR codes,” Mayor Bosse said. “So, by next month when this comes back, we definitely have to have some really great paths to get us there and maybe even have some test pilots up.”

Bosse’s husband, Jon, asked about the possibility of a city-wide Ping-Pong tournament, and others proposed doing a weekly game night held at the city’s public parks where neighbors can gather for a few hours on a weeknight and socialize over a game of backgammon, chess, or even flag football. “That’s a great idea,” Bosse said. “I’ll be there and I’m sure I won’t win anything, but I’ll be there. I love it.”

Another resident proposed taking it even further by incorporating an augmented reality component to the QR codes, to which Bosse replied:

“It’s a great idea once somebody can explain it to me, but I know that that is definitely the future. I’m still trying to get there myself, but I love it and the conversation about the metaverse is going to be at our next city council study session agenda.”

The evening closed with an announcement from Laura Biery, the city’s Marketing and Economic Sustainability Manager, with news that the city of Beverly Hills is a finalist in the Los Angeles Economic Development Corporation’s award for “Most Business-Friendly City in Los Angeles County.” The winner will be revealed Nov. 9.

The next Live with Lili will be held on Sept. 13 at 7 p.m. at City Hall’s Municipal Gallery. 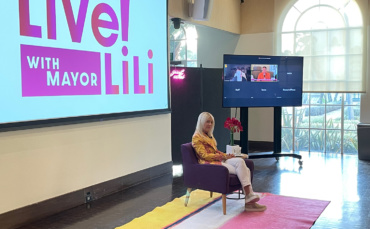 During the forum, Beverly Hills resident TJ Wilk agreed with Reiss. “I live on Reeves and she's right,” Wilk added. “There's a smoking issue, and it would be amazing if there was a way we could eliminate that somehow.” 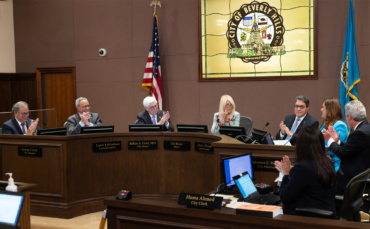